This set is Excellent! Very creepy on the graphics and the economy is tough! 54 people VS 1500.

I suggest users snatch a copy before they sell out!

It has been over 2 years since I released an update for Wasteland, mostly due to losing all of the progress I had made up to last year and then not having the motivation to redo it again. But for the last few weeks I've been playing OpenTTD again, and of course it had to be another Wasteland AI game since the last one was so fun

So far I'm about 200 years in on this game, and while I've been playing I've been adding and fixing a few small things along the way in addition to what was already done and shown before. As always, there's far too much I want to do than I have time for, so rather than sit on it for several more months while I whittle away at more small things, I want to release 0.5 and get out from underneath it.

I'd love to do more with houses (especially the last stage) and vehicles of course, but that will take some time, and it has been a long enough wait already

This update only brings a few new things such as roadtypes, new graphics, and several bug fixes; some of which have already been shown before. Sorry I don't have any interesting screenshots to show this time, but here's the full changelog for those interested:

One key thing about the roadtypes I'd like to point out, is that the asphalt road isn't introduced until January 2, 2077, so when starting a game that option will be greyed out for one game-day. It is a little awkward, but it is the only way to have the towns initially spawn with the destroyed roads instead of the new ones, while still having access to asphalt roads from game start. Hopefully this won't confuse people too much

As promised before, Wasteland 0.5 is compatible with 0.4, however because Wasteland now has roadtypes it does require OpenTTD 1.10 or newer to run. The .tar file can be found in the first post of this thread as usual, and soon to be on BaNaNaS as well.

), otherwise, hopefully you enjoy it as much as I have

One of the small things I had wanted to do for 0.5 but decided to wait on was a new transmitter graphic. The current "broken" OpenGFX transmitter is so damn hard to see that I routinely find myself running into them while building routes, so I wanted to make something a bit more visible and also more interesting than some empty scaffolding. Below is my attempt; I made it a bit more....Wasteland-like(?), and also added a bright fence around the perimeter to make it stand out more in densely treed and/or mountainous areas, which does seem to help with visibility a bit 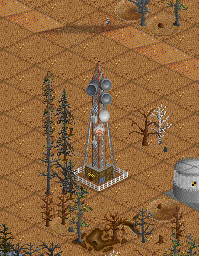 I always thought transmitter tower was a strange choice for an immovable object. Why not a 3x3 or 5x5 mountain peak or chasm/canyon? Just never made sense me to me to have a piece of infrastructure in the infrastructure management game that is both not able to be built and entirely useless, regardless of the setting. The only benefit I've found to having it at all is when I mod it to be a rock and use them for static mountain chains in scenarios.

Anyway, /endrant/ and your version of the tower does look good, though I don't imagine transmitter towers would survive fifty years and the apocalypse.
Top

Fuerfrost wrote: ↑07 Oct 2020 20:44 I always thought transmitter tower was a strange choice for an immovable object...
[snip]
...I don't imagine transmitter towers would survive fifty years and the apocalypse.

Yeah...I was thinking what else such an object could be, but other than maybe a rock, nothing comes to mind that I wouldn't rather do as a removable object. As for them surviving, I was thinking more likely they were renovated/repurposed after the apocalypse and used by different factions for communication, or at least that's my justification for them still existing

I wish it were at least possible for NewGRFs to make those objects removable, but I guess that's what magic bulldozer is good for

I dunno. I like your idea of taking over a broadcast tower for communication, it just seems like an ultra low priority compared to just having a reliable source of clean food and water. Like, I could imagine fallout-esque bases being built on those towers occasionally, though there are vastly better options, but who's going to be trying to call you on the half century old phone system?
Top

Other than that, there could be a small watchtower (à la Firewatch) at mid-height of the transmitter, then the transmitter tower would be a sort of watchtower, with a possibility to communicate to other towers when raiders are on the move or whatever happens in these parts of the wasteland.

Or maybe some semi-destroyed structures made of reinforced concrete (bunker or similar), that are not usable anymore, but virtually too tough to destroy.
Some screenshots of mine...
Top

Those would look cool as eyecandy, but probably not as a one-tile, non-removable object which tends to spawn in clusters on mountain tops.

Instead, it is possible to make them NewObjects (of any size and removable) that spawn on map generation, which also allows control over things like how many spawn in a given area, terrain type, slopes, etc. In fact I already played around with the vault entrance idea by making a few of them spawn randomly on certain slopes across the map, scaled by map size, and it worked well. Only reason I removed it is because my graphics looked terrible

But I've definitely wanted to add that and other random eyecandy objects around the map like random shacks, piles of junk, etc, just comes down to drawing them, and so far I've just been doing other stuff

Fuerfrost wrote: ↑08 Oct 2020 05:21 it just seems like an ultra low priority compared to just having a reliable source of clean food and water.

But yeah I get what you mean, and actually the watchtower/base idea makes sense to me, I might play around with that

Andrew350 wrote: ↑08 Oct 2020 16:16 Instead, it is possible to make them NewObjects (of any size and removable) that spawn on map generation, which also allows control over things like how many spawn in a given area, terrain type, slopes, etc. In fact I already played around with the vault entrance idea by making a few of them spawn randomly on certain slopes across the map, scaled by map size, and it worked well.

Could it be possible that those NewObjects are coded in such a way that they only are placed on all coastal slopes (the ones with a narrow waterline)?

Reason I ask, is to see if it is possible that way to finally make coastal slopes snow aware

No, I don't think it allows placing that many objects, it looks like only 255 per object type per 256^2 area. (At least according to NML Specs; interestingly the NFO Specs are somewhat lacking that information

Andrew350 wrote: ↑08 Oct 2020 17:30 No, I don't think it allows placing that many objects, it looks like only 255 per object type per 256^2 area. (At least according to NML Specs; interestingly the NFO Specs are somewhat lacking that information

Would be interesting to find out...

Is it possible to have objects spawn during gameplay, or only during map generation? Are generated objects permanent like transmitters and lighthouses, or is that controlled by `OBJ_FLAG_IRREMOVABLE`?
Improved Town Layouts | Improved Town Industries
Top

No, objects can only spawn on map gen, not during gameplay. And yes, objects can be marked as irremovable by using that flag, otherwise they can be destroyed like normal objects

Andrew350 wrote: ↑08 Oct 2020 22:00 No, objects can only spawn on map gen, not during gameplay. And yes, objects can be marked as irremovable by using that flag, otherwise they can be destroyed like normal objects

What about adding pointless industries that are only there for taking up space and looking pretty?

Raider or survivalist forts that refuse to trade.
Old nuclear power plants sitting around ruined.
Skyscrapers in varying states of disrepair inconveniently blocking your perfect track.
A sprawling factory complex taking up a randomly huge area but completely useless in the apocalypse.
Might also be a place for meteor craters or ufo crash sites.

If these types of things can be given a higher spawn density than your standard industries, like a x5 or x10 multiplier, they'd fill in the maps with some life. As industries, they wouldn't be permanent, but they're gonna be where they are for a while at least.
Top

I don't think so since a scenario is basically a game already in progress, not just being generated, so any objects would have to be placed manually in the scenario editor in that case.


Fuerfrost wrote: ↑09 Oct 2020 04:51 What about adding pointless industries that are only there for taking up space and looking pretty?

I feel like these should be done as NewObjects rather than actual industries though, since having "dead" industries lying around might confuse people and lead to questions of how to make them produce something

I do like the ideas though, just need some graphics to make it happen

Subsidy (like construction materials) to repair the industry and put it back to operation? Would it be possible, or we cannot change the cargo accepted by industries?
Top

I don't know if it's possible to permanently change cargo acceptance like that for a one-time (or limited-time) delivery of a cargo. And besides, how would you rebuild the industries needed to make the construction supplies before anything produces construction supplies

In all seriousness though, I have thought about adding a sort of "hard-mode" with several more town growth requirements and complex industry chains just to add to the challenge a bit, but first there are many things waiting to be done already

Call me when you integrate FIRS extreme. I'll be all over that.
Top

Actually... Why not do it by date? First X years are destroyed industries, next X years are premodern industries like industrial revolution Era, then it leads into modern or future or atomitech stuff?
Top
Post Reply
262 posts