Hello,
we want to introduce you our little projects of Slovak Transport Graphics (hereinafter referred to as "STGFX"). Here is a list of sets we plan to create. Into this thread I will add news and progress pictures so I have documentation of the development.
Lets talk and show!

Slovak Bus Set we aimed at citybuses mainly, because we wanted to do something complex and enjoyable for players (ehm, us).
Here is a picture, you can see there Karosa ŠM 11 (city bus), Karosa C 734 (local lines) and Ikarus 280 (.08 city bus, .10 local lines). All Karosa buses in the picture use comapny colours (1st company colour is for citybus, 2st comapny colour is for local lines, but this is not a rule). Ikarus 280 has actual livery used on them. 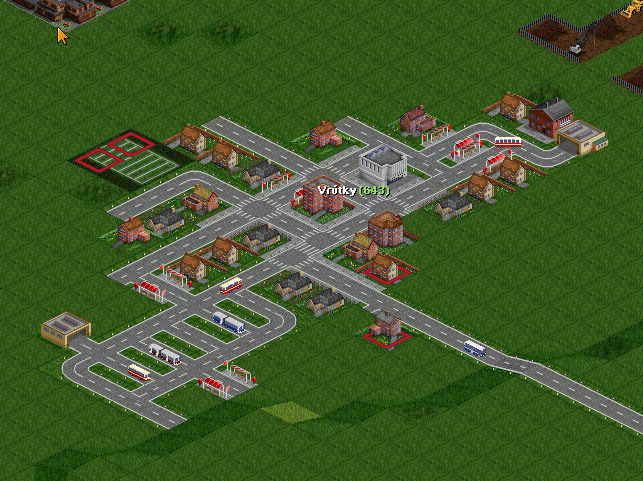 We used subtype menu to allow change between CC version and actual livery used in reality. 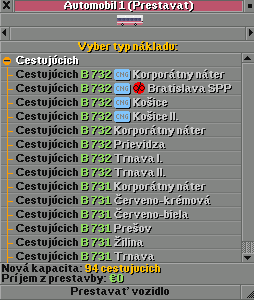 As you can notice, there are subtypes for Karosa B731 and those are: B 731, B 732 (updated version) and B 732 CNG equipped with CNG engine that is cheaper to operate. (Yes ingame!) And there are town names that this vehicle can use livery of.

Of course there is much more buses in set to show than Karosa and Ikarus, but why would I show everything in the beginning, right?

Slovak Train Set, well here I aimed at the fact that Slovakia use two main electric system for trains. DC 3kV and AC 25 kV. So I wanted to include behaviour of this ingame. That was quiet nuts, but I knew it was made before, so I tried and I did it. Actually I even added few more railtypes in the game. AC 15 kV (because of short railtrack connection to Austria), and narrow gauges 600mm, 1000mm (those two need to be done properly as there are nonelectrified, electrified and with rag rail versions, but this have time for now.)
I obeyed standardized labels for this (for sake of working it properly and avoid headache) and I've created my own system of labeling for this. It will be published online on public grf file itself so anyone can understand how it works.

(Anyway, I saw there were attempt to make Trains of Europe with electrification systems, but I don't know if it has been done or not. But I think there were diffuluties, so I considered for short period of time to expand my Slovak rail set to Europe rail set, but I don't think I've drive to that.) 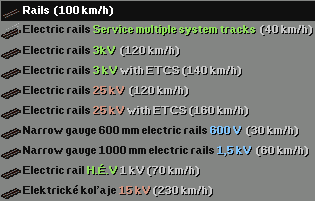 Other thing I wanted in-game was longer carriages because length of "8" looks so strange for me and I've seen this in Czech Train Sets so I speculated how to do this, and I figured it out. 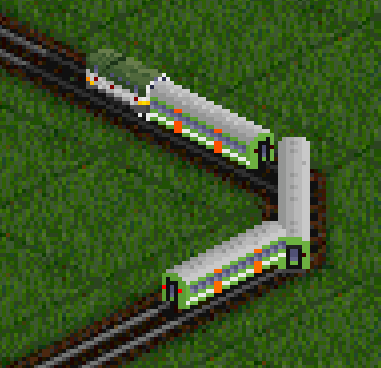 Not only that I've made it I decided I want locomotives and carriages behave rather as in reality. It is a small touch but you can notice that end lights are on only on the last car of the train. Even red lights on the loco are switched off (but you can't see this on this picture) but I think it is worth this small details no one really cares about. (Well, I do.)
Špajdy | Slovakia | languages: slovak, eneglish | I code in NML |

Here are pictures of our PushPull that actually behave as a pushpull unit. And yes you can try our pushpull technologies if you search for DB Pushpull on the forum. We made it public as it is not suitable for Slovak Train Pack, so gave it. It should behave almost the same. 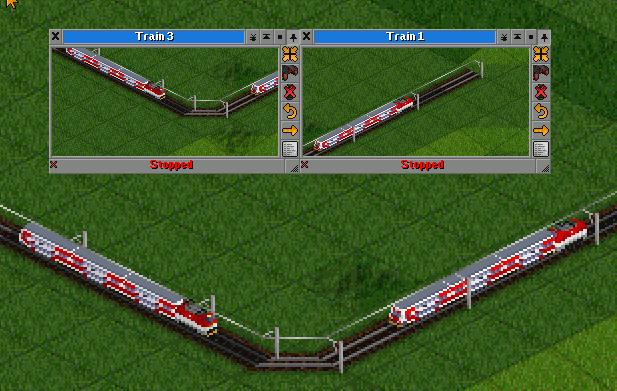 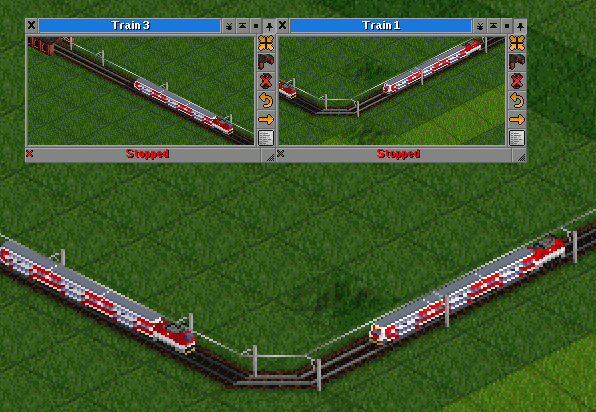 Hi guys,
I absolutely love the idea of this set and looking forward to try it in the game. For couple of months I've been playing scenario based on Slovakia heightmap so using actual liveries for slovak towns/cities will be magnificent.
Fingers crossed and keep up good work.

spajdy wrote: ↑06 Oct 2020 20:17 (Anyway, I saw there were attempt to make Trains of Europe with electrification systems, but I don't know if it has been done or not. But I think there were diffuluties, so I considered for short period of time to expand my Slovak rail set to Europe rail set, but I don't think I've drive to that.)

Looking forward to it.

And, you could possibly in future start with adding Czech trains to it (you will already have the tracks and a lot of trains), and then expanding it slowly.

PS: How timed! Just after my release of trains from High Tatra mountains!

Okay, at least the tracks I made can be useful for somebody... And feel free to PM me, if you wish to use some of my train graphics.
You can write to me in English, or Czech.
Můžete mi psát česky, nebo anglicky.
Top

I've actually downloaded that and was like why the hell this doesn't work than I figured out mismatched labels with my own set. (I happen to forget about those, often.)
So I've changed my label to standardized for High Tatras track and it worked fine. But it won't in the future, because I decided using strictly my own labels for this set, so once I get to those trains I will change it properly.
Špajdy | Slovakia | languages: slovak, eneglish | I code in NML |

I am here just with a quick update:
We've decided on a beta release of our Slovak Bus Set, it should be by the end of December of this year. We are not done with this, but we post our progress on Instagram and people started asking when they can play with it, so that is why we are planning on public testing. 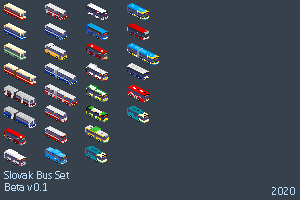 Hello there, I want to document my progress as I go.
I am updating the code for my buses, so it is simpler to make changes furthermore because we have a lot of types and it gets a little bit confusing if it doesn't have any structure. And while I am doing so I am solving issues that bug me. And I am adding little tweaks here and there. 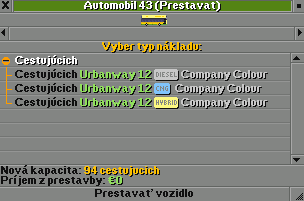 Here I needed to figure out, how this bus will behave in-game. Because DIESEL version is good to go, but CNG and Hybrid have lower running costs, okay, so I've made the switch and everything is cool right? I still wasn't pretty happy about it, because Urbanway (Full)Hybrid switches to an electric engine once it gets under 20 km/h, thus it should generate lower running costs, so okay I've created another switch and everything seems all right, but I don't really know when the bus is running on electricity. How would I know? Do I need to know? No, not exactly. I just want to.
So I've created this little icon of battery and placed it in GUI icons in the vehicle list and vehicle details. So whenever it runs slower than 20 km/h, it shows this icon:

Anyway, I got a little bit tired because I had to repair some graphic files for the buses as they have been more like placeholders without counting "sun" and any kind of shading. So I opened my other set, that is the trolleybus set and I've created a bit of the road in here because we will need them once we get to the Trolleybuses. 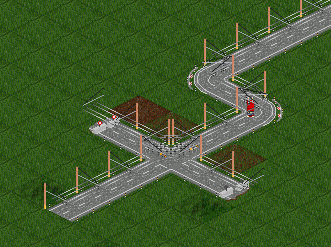 But it seems everything will be all right and on time in December for the first BETA. I hope so.
Špajdy | Slovakia | languages: slovak, eneglish | I code in NML |

Pst, I should be probably quiet about this because this won't be included in the beta release, but what the hell I am way too excited to show this.
This is not 32bit graphics. This is 8bit graphics, but alternative sprite for 4X ZOOM. At this moment it is not clear if this will be included even in the final version. But maybe, maybe! 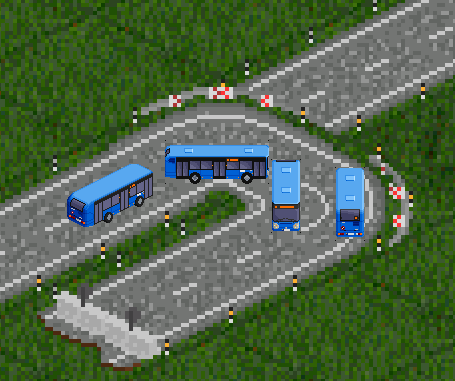 Iveco Citelis 12m was the first bus I ever created in classic graphic, so here I tried to step up my game.

And yes, we made road graphics, but for now, it stays in development, mostly for the trolleybus set, but in some version, we also start implementing it to the bus set. We want to add the bus line (only for buses), and we want to create roads with bicycle lanes.

Users browsing this forum: No registered users and 28 guests