The first thing to say is that it's not done yet.

I guess we'll be saying that a lot, so I wanted to get it in early. I reckon it's about 12 months work.

We'll post more about the plans for the set over the next few weeks, but here's an outline:

- 29 cargos (2 spare, 1 reserved for NARS regearing). Some of the cargos are present in other sets, some are new.
- Industries change over time. Some types of industries will close and disappear from the map at certain points in history, others will become available.
- Complete industry chains, with lots of raw materials to move, and also a nice range of 'final' cargos including the ability to deliver both goods and food to towns in all climates.
- We'll be looking at cargo classes to ensure support from the major vehicle sets (at least the ones that have good cargo class support).
- Over 50 industries planned, (this will restrict the set to OpenTTD only).
- Includes some things that have been asked for recently including a 'waste' cargo chain. Power stations will also be more useful.
- The set will be GPL; some feedback will get the standard answer 'you could change that yourself'

We are in the unusual situation of having two people (UPDATE - three people, Zephyris joined us) who can both code nfo and draw pixel art. Luxurious as this may be, we think we'd get a more polished set with perhaps one more core contributor. Specifically we have gaps for:
- devising and coding industry layout variations
- graphics for construction stages for the industry. We could probably also use some help with industry graphics, but we'll need to keep a consistent style in our work to make the set polished.

PM me, or reply in the thread if that sounds like you.

We'll also need some play testers, but not for a good few months. More immediately we'll also be asking the grownups possibly silly questions about nfo (those grownups can guess who they are I reckon).

Wow, if it weren't you and FooBar, I would think this is just another overambitious noob's thread

Btw, are you sure 50 industries is not too much? Not only it is 50 industries to paint and code, but also 50 industries to learn to play with. And please, make it possible to play without any transport limitations (I mean limited production like Pikka's set or so) and don't make it too komplex (in means of gameplay), so also not-so-hardcore players can enjoy it.

Anyways, good luck, I will be watching your progress

@ CommanderZ: I guess this is a good point to explain the philosophy behind the set, which is in the spirit of the classic TTD style of gameplay, with some tweaks. Specifically I want to see if a well-thought out industry chain can reduce the 'not enough interest' problem that some of us have after about fifty years of gameplay. As some types of industry close and new ones appear, players will have new cargos to transport, and routes that need to be closed, or reused for something else.

We also want it to be a lot of fun

So it won't involve too much micro-management. PBI is my favourite industry set, and I like the stockpile limits, but stockpiling won't be part of FIRS. There will be 'production boosting' cargos that can optionally be delivered to some industries, similar to Railroad Tycoon 3, and to the metal chain in the CanSet.

50 industries may sound like a lot, but should be manageable for players, and they won't all be on the map at the same time. In my view it will be more fun for players (I like to get at least one of each type connected into a chain on a map, then I start getting bored in a game).

You're right that drawing 50 is a big task, but many of them will be constructed from reusable blocks of graphics, as in the original TTD graphics. Remind me what I said here in a few months when we're actually drawing them

Sketches of some of the industries (sorry, blurry photo taken on my macbook camera, scanner not working 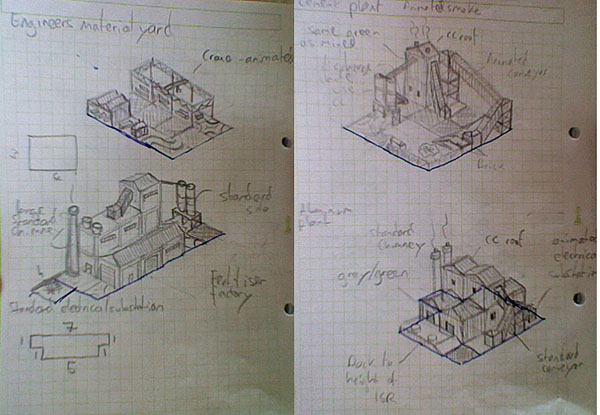 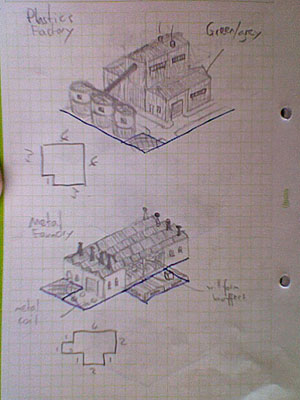 Ah, good. We have a thread now!

I was about to relpy to CommanderZ's post, but that doesn't seem necessary any more

Wow, sounds like a big task, but it certainly does sound good

If i may already make a suggestion:
I think it would be great if non-expirable cargos like coal or iron ore, or whatever you will use, do not decrease their value as fast as they do in the standard-industries. This could make it possible to transport such goods with ships, which are rather slow! However, that's your call, and i don't know if that's even possible with NewGRFs.

I'm curious about the progress and will watch this thread closely

Conditional Zenith wrote:So from what I have read so far, this will differ from ECS in that:
Industries will belong to certain time periods
There will be 50 industries, which is more than ECS

Let me point out that "ECS" is just the cargo scheme (cargo names, labels, classes, bits, etc), with George´s ECS vectors being an existing implementation of it. Industry names, or industry behaviour (production chains, opening, closing of industries) aren´t defined under the ECS scheme.


Basically, what I want to know is how will this differ from ECS?

From the above, it might only differ from the choice of cargoes.

Conditional Zenith wrote:So from what I have read so far, this will differ from ECS in that: Basically, what I want to know is how will this differ from ECS?

Add to that: And maybe more but I can't think of that right now

randknu wrote:To fix this i recommend setting commodity prizes steady for commodities that does not perish over time ex. for coal, wood, oil, goods, and so on.

IMO, a small decrease for raw material prices makes sense, because even the most patient consignee wants to receive his order one day or the other. Moreover, the game needs variable delivery prices to enable some sort of "competition" or "assessment".


Jarekexe wrote:I agree about the coal thing - the price should not decrease with time as this material doesn't get any worse with time. Same with iron, oil?

What we will be implementing is not a 100% fixed delivery price, but delivery prices will not decrease as fast as they do now, in order to make large and slow transportation methods more profitable. E.g. hauling oil from one side of the map to the other side with a large and slow oiltanker should be profitable enough to cover the tanker's running cost and make a little profit on top of that.
FooBar's Tram Tracks | TransRapid Track Set | Metro Track Set | OpenGFX base graphics set | FIRS Industry Replacement Set
Dutch Tram Set | Dutch Trainset 2 | Dutch Road Furniture
Top

Conditional Zenith wrote:Basically, what I want to know is how will this differ from ECS?

Except possibly the last, those are all features (or misfeatures) of George's ECS vectors, not the ECS specification.
To get a good answer, ask a Smart Question. Similarly, if you want a bug fixed, write a Useful Bug Report. No TTDPatch crashlog? Then follow directions.
Projects: NFORenum (download) | PlaneSet (Website) | grfcodec (download) | grfdebug.log parser
Top

Although George´s vector scheme looks somewhat complicated with regards to coding, the general idea behind was the possible replacement of whole vectors. In this way, people wanting to supply own industry .grfs wouldn´t be forced to supply all industries/cargoes, but just a subset.

OTOH, I don´t know if this works as intended. I´ll have to check it out in the near future with my own vectors.

The points so far:

It is also possible to have compatibility with PBI defined cargos, however there are fewer cargo types there. In general, cargo classes should allow a certain amount of compatibility, but you can end up with odd combinations.

What we will be implementing is not a 100% fixed delivery price, but delivery prices will not decrease as fast as they do now, in order to make large and slow transportation methods more profitable. E.g. hauling oil from one side of the map to the other side with a large and slow oiltanker should be profitable enough to cover the tanker's running cost and make a little profit on top of that.

Well, my english isn't that good, but you understood exactly what i meant

Good to hear that this will be included!
Top

Ok, I was careless in saying ECS, when I in fact did mean George's implementation of ECS industries. I apologize.

And I do know with George's ECS vectors that stockpiling can be turned off with a parameter.
Top

Wow this could become a great project

If you need help drawing: I hav a lot of free time the next couple of months:D
And after my long absence I would like to improve my drawing skills