To all those Ladies and Gents not frequenting the IRC Channel, I've been losing sleep lately over a new feature for TTDx.

Now, A lot of you will be disappointed... since these are merely modified Road Vehicles; but they look damn fine.

I'm still ironing out a few bugs, but I hope to get a pretty solid preview available in the next Alpha....

[excuse the red fences on the 'light-rail' tracks, it was a bug at the time this screenshot was taken] 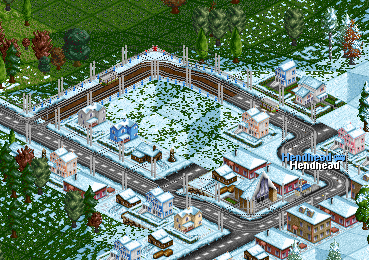 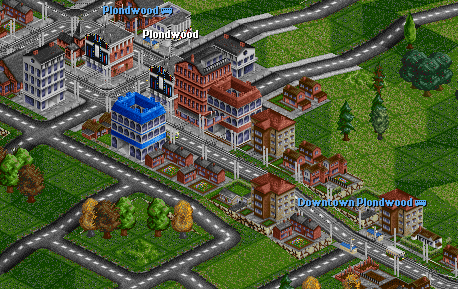 Hey, I'm not dissappointed at all! Indeed, I'm glad that trams work as road vehicles and not as trains, since that's the way they are supposed to work!
So will they be compatible with trucks and buses? I mean, have a road with tram rails, and have buses and trams go on the same path.

Yeah, don't worry about that, they're all RVs and use the exact same roads, etc... they still fight for the road. Of course, standard RVs can't drive on the light rail tracks, and Trams can only screech on rails.

I'm lucky enough to have been able to test these, so I can tell you roughly how they work...

I'm hiring Pikka as my personal assistant.
Please direct all future enquires to him.

whoa, i got it from IRC as well, amazing 'innit?
"Your mother was a lobster, and your father... was also a lobster" -- The rascal formerly known as astath -- Last.fm -- Official TT-Dave Worley Fan Club

That's excellent! I reiterate myself, this is the opposite of a dissappointment; I'm very glad that there are trams that work properly!

Will we have a X'mas release for those? This would be a neat gift

Are you willing to negotiate?

They will work on:
-tunnels
-bridges
...but there'll be no visible graphics.

And you are NOT allowed to complain if you try to build Level Crossings (rail/elrail/monorail/maglev) anywhere near my tram tracks... they're causing me grief.
Currently the trams can cross them when you build tram tracks over pre-built level-crossings... but it's nasty.

...am currently just working on getting DOS happening, then you'll see a release. 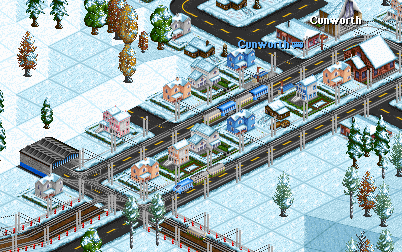 Hah.. they nearly look articulated. I can assure you that they are not.
whogetsrighterway.PNG (61.36 KiB) Viewed 29323 times

Question though... As they behave like RV's, I assume that they will also use those Vehicle IDs, correct?
Or did you manage to find different IDs for them?
*** Ce French Train Set ***
*** Visit my transport related pictures on Flickr ***

Yes, they do use RV ID's, they are coded just the same as RV's, except that they have properly 1C set to 01. Othwerise, exactly as RV's from a coding POV.

At least with my trams, I am giving them a slightly higher capacity to normal RV's, amd having them load slightly faster, whilst making them slightly slower. Combined with being restricted to rails, I hope this will make trams a standout from buses in regards to passenger RV transport.

I am currently working on proper tram graphics to go with this release, based on Melbournes trams. The ones shown in Steven's screenies are the trams I drew for the Sydney Bus Set I am working on, but they were done long before trams existed, and as such don't have the electric poles and they don't look as good as the ones I am working on.

ATM I have drawn and coded one tram specifically as a tram, and that is the C-Class, shown below.

(hey, I don't do that often). I'm also glad to see they work no matter what roadset people use, that makes life A LOT easier for the few people who once made a roadset for TTD.

For the vehicle IDs I have already some plans. But this will be after we get to a stable version...

As my late ideas fundamental change how TTD/TTDPatch works you won't see much from me, but expect a chrismas version from me

A couple more trams roll out of the workshop and onto the tracks.

Of note is the fact that the C-Class is an example of the random selection of models running on all the different private tram companies around Victoria at the start of the 20's. I wouldn't mind learning how to code it so that this model appears in a random livery, but thats further down the line. We have a sample white/green livery, which will do.

I've also completed the W1 Class, which was brought in when the whole tramways network was brought under one company, and the W2, which is a later, higher capacity model.

The following screenies show you the two W-Class trams completed so far in their early livery.

As I say, these trams will be released alongside the trams feature, although only a few trams may be avaliable, depending on how many trams are drawn and coded by then 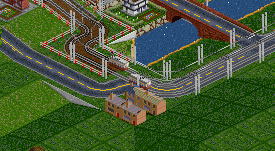 Excellent work! I'm looking forward to playing with it!

Oracle wrote:Excellent work! I'm looking forward to playing with it!

Diagonal bridges, larger maps, 16-bit graphics. But it all faints in the light of what can and has be done

A few days ago I tried the tramset and was a little disappointed
having tried locomotion trams earlier.
But this is just wonderfull

Diagonal bridges, larger maps, 16-bit graphics. But it all faints in the
light of what can and has be done Very Happy.

Well diagonal bridges and 16 Bit graphics mit be possible (altough the later not worthwile IMHO)
For larger maps rewriting the whole game seems easier. (although if I ever find time to become a patch developer, I do larger maps just for the fame *gg* )

PS: Thanks Oskar for drive-through busstops

Where are trailers for the trams?!

Me thinks that Oskar has a nice Christmas present in store for us.

Oooh, nice work, I look forward to playing with this sometime.

Looking at the way tram tracks blend in with whatever roadset made me wonder if that can't be done for normal rail crossings too (sorry for this OT queston).