Note: Railtypes wont be implemented in Spain set for the moment. But I can try to make special releases.

This is the Spain set taster. I will link here all updates and releases here. It supports ECS and FIRS cargoes.

This is a modified version of Total Bridge Renewal Set with high speed tracks and narrow gauge tracks (remember that this is not the official file!):
http://www.tt-forums.net/viewtopic.php?p=727370#p727370

Some narrow gauge trains from Spain (FEVE) that would work on OpenTTD with Spain set if multiple GRF loading is enabled. It needs more work:
http://www.tt-forums.net/viewtopic.php?p=733974#p733974

This is the latest release of Spain set taster:

The livery of 440 has four options: regional, commuter, regional refurbished and commuter refurbished. These options are always the same, but they can provide different liveries depending on the year or a random value.
In the screenshot there are these trains: The short trains are the 594 DMU. These trains are like the IC3 trains. Some of these trains are being refurbished, removing the rubber front and replacing It with a new front. The last train is the 449 EMU. I could use a introduction year of 2009, but I have implemented the 25 kv-50hz version, and I suppose that these trains could be used in 2012 or latter.

Work to do in future releases: 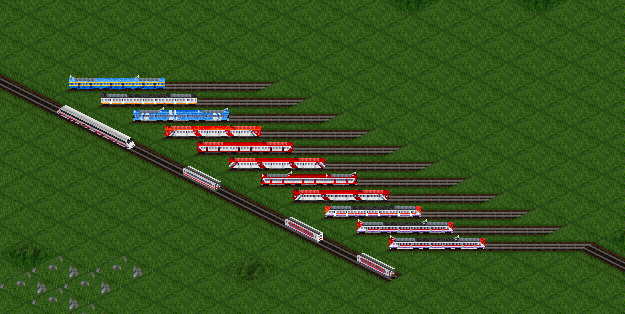 can you put this on bananas?
AroAI - A really feeble attempt at an AI

Thanks. I will try to add more trains.

About Bananas: I will look it. It could be interesting, but maybe It could be a good idea to wait when the set was more "finished", because I want modify some trains. For example, I want implement the different Talgo trains with the cargo subtype switch (refit button), It's better than adding a mail wagon. 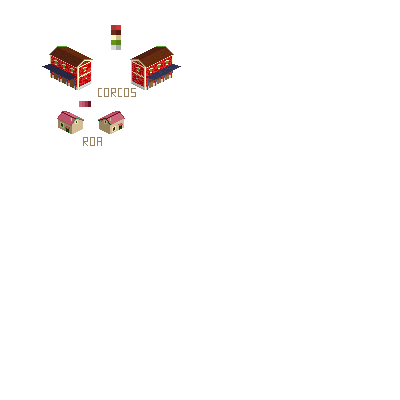 I have being played OTTD for a few years now and thinks its one of the best "time-killer" but i really havent found out how to
install new graphics like this one "high speed"..

Any one who can tell how to do.

Im running ottd 0.74 patch and can get new stuff from a server inside the game.

Thanks in advance from NorWay

mxhotel wrote:but i really havent found out how to
install new graphics like this one "high speed"...

Download the .grf and install it by putting it into your /OpenTTD/data directory, then go to NewGRF Settings in the main menu, click "Add", and find the GRF. Then, click on it, click on "Apply changes", and start a new game.

Brought to you by: http://wiki.openttd.org/NewGRF#Installing_NewGRFs
Top

Shamray wrote:Sorry why IC3 trains were refurbished in a way of removing rubber front? do you like new more?

Maybe It should lower the drag coefficient (most of these trains runs uncoupled). I don't know the reason.

The refurbished trains looks like a TV instead of a Zodiac.
Sorry if my english is too poor, I want learn it, but it isn't too easy.[/list][/size]
Top

Not, the real life train It's a bit like a TV screen. That is the reason for the nickname.

The trains were modified to reduce the drag coecifient, because most of times, they are used alone, not coupled.

There are lots of nicknames based on the train shape. For example, there was a train which looks like a washing machine or a digital watch. It was the original 448 trains:
http://listadotren.es/motor/phototrain. ... 2&from=ser
Another nickname is "camel". Nobody knows the reason: 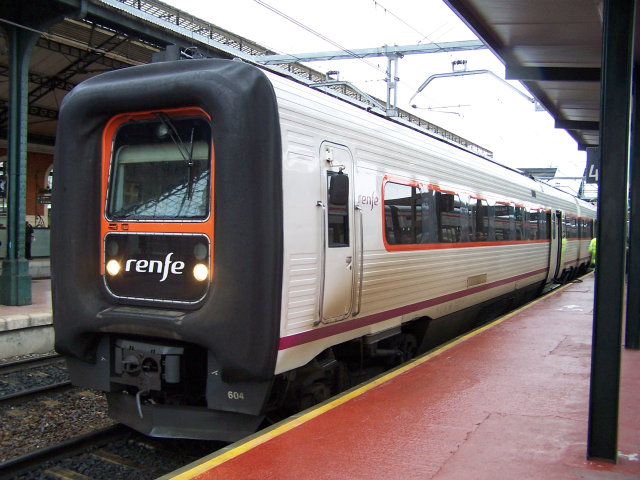 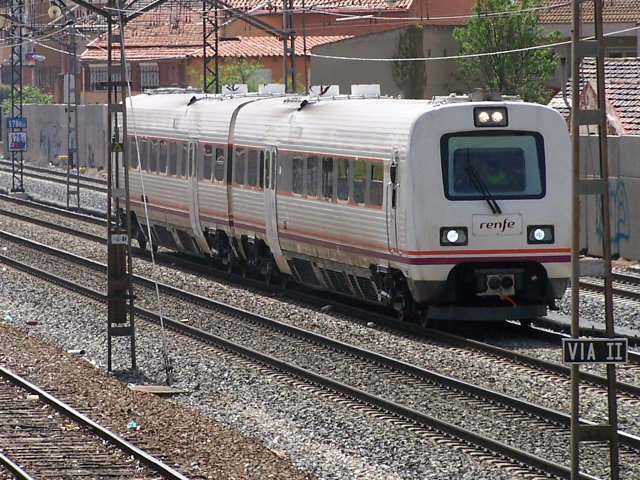 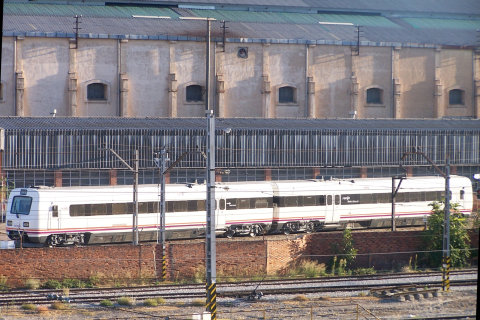 Wow, it's been so long since I came here last time!

I'm sorry for my absence, but I am very glad to see everything still running!

Congratulations on the new release, and keep it up!

The Spain Set & HS Tracks is no longer Update....

You can Cloned the Re-branding : Spanish Renewal Train Set (SRTS)
(Everybody) SkiddLow's Back, alright.

I'm not updating because I don't know what to do.

Also, I am not very good drawing sprites.

At this moment I'm more active on Locomotion, but maybe I could return soon. I hope it.

This is my latest GRF file, It's a preview:

I don't know if I should implement railtypes or not. Railtypes is interesting but I don't know how to implement variable axle gauge trains or trains with two voltages (3kv & 1.5 kv)...

The Dutch Train set does it with voltages for a number of trains. See for example the TGV: graphics.pnml and item.pnml. The downside is that you need to provide a track that represents both voltages/axles/other_property, because in the track parts you define compatibility with other tracks.
Coder of the Dutch Trackset | Development support for the Dutch Trainset | Coder of the 2cc TrainsInNML
Top

I have been playing OpenTTD with Spainset, ECS and some nice GRFs (lighthouses, VAST stations... and more). I have found some bugs on Spainset (for example "4D 0C"instead of "0C 4D" in a introduction date, or some Action 2 errors in loading stages). Also, I have tried to fix the cargos carried by wagons, because there are lots of them in ECS.

I have tried to fix them. It could be more bugs, but... I hope that there are less of them.

This could be the latest release for the moment.

I'm very tired, there is a bug with the 594 DMU that I can't fix. I have copied the action 2 and 3 from a previous version (without bug) and It just doesn't work. It doesn't load the sprites for the "locomotive" (It loads random sprites), the sprites for rear part works fine.

In this release I have tried to fix other bugs and I have added some missing liveries (New Pendolino (It's included in 104 EMU), 319's liveries and 433 liveries).

Maybe in the future I can try to continue.

I don't where is the problem, this is very weird.

I suppose that all IDs should work, also, the ID 4A worked well in previous releases...
I will leave this for the moment, I will try to help in the 32 bpp forum. I hope that I can fix it in the future.
Maybe this could be caused because I test the GRF file in started games.

Bug fixed (new file is on the previous post).

If You reuse your own code, remember that You can forget to change a small detail (a ID, for example).
This bug was that I had two "Action 3" using the same ID.

The next trains that I could add are: But at this moment I want to fix other new bugs and try to help a bit on 32 bpp forum. Also I want to add some new wagons for Locomotion.
Sorry if my english is too poor, I want learn it, but it isn't too easy.[/list][/size]
Top

I am not sure is this is the right place to report a graphic glitch in the Spain Set. If not and if it has not yet been addressed, please pass it along.

"Those who cannot remember the past are condemned to fulfill it;...and only the dead have seen the end of war."
Jorge Agustín Nicolás Ruiz de Santayana
Top

Thanks, I didn't know that bug.
I will try to fix it. Also, there are more bugs for sprites.
Sorry if my english is too poor, I want learn it, but it isn't too easy.[/list][/size]
Top

jmc47ott wrote:I am not sure is this is the right place to report a graphic glitch in the Spain Set. If not and if it has not yet been addressed, please pass it along.

Fixed, also I have fixed most of visual errors.
I have played 90 years with ECS. I have tried to fix errors (cargos without useful wagons, incorrect sprites for a certain cargo...). I hope that now Its almost playable. It needs running and purchase costs, but at this moment I feel that at least its playable. There was a curious bug: a steam locomotive didn't have a defined speed, the game used the speed of the replaced vehicle (Floss '47', 160 km/h or 100 mph). The AI didn't doubt which train select, even in 1980 or latter.

I have fixed it, I hope that AI will use more different trains.

The next release will take more time, because at this time I think that the GRF it playable Itself and the next release will need more work. In the next release I will try to add the "two colors" liveries in steam locomotives (this needs time, because I don't want to make a simple recolour of all pixels with a certain grey colour). I will add costs for all vehicles, because this is needed. Finally, I would like to add two locomotives: 253 (Bombardier Traxx F140 DC) and 277 (English electric, I don't know the model) and maybe a 1500v emu.

Hi, I just wanted to ask/make sure I am not doing something wrong but right now I can see Velaros only in the maglev depot, is that how it's meant to be? Because Velaros travel on electrified high-speed rail track IRL, don't they?
Top
Post Reply
23 posts