Does anyone have any idea which screen capture program to use if you want to make some screenshots of the classic Transport Tycoon. It's for my website Transport Tycoon Extreme. Thanks!
Top

Yes I remember Owen going on about that over and over again way back!

Now how do i use it? The .zip file has 1 file in it, and it's a non-recognised file!
Posted by Raichase. Visit my Flickr! Gallery, Blog (get a feed of everyone at once at Planet TT-Forums).
Raichase - Perfect timing, all the time: [13:37] * Now talking in #tycoon

Oops. I didn't check that. I only did a search on the net. But I downloaded it before, so here it is.

Vthief is what Owen suggested many times, you will see his reply a bit later on
Well, back to work, lot's of it in the near future
Top

okay, thnx... BTW printscreen does not work on with Transport Tycoon. It has something to with video buffers of something. Anyways, thnx for telling me...
Top

Right, do the following:

2. Open an MS-DOS Prompt and type:

at the command prompt. You need to do this every new DOS session.

4. When you want to take a screenshot, press F12. You can take multiple screenshots - each is saved as a .VTF file in the current directory.

5. Return to the DOS prompt and type:

This should display all VTF files in the current directory, in a slideshow-type way, I think. If it doesn't (I haven't tested it), type VTFVIEW blahblah.vtf, where blahblah.vtf is the name of a VTF file, obviously.

What did I say

Thnx for the help
Top

Ok ... I decided to go retro for a bit and I resurrected my old Transport Tycoon CD.
Then I got an urge to try a screenshot.
I forgot that the original version did not have a screenshot tool.
PANIC
I took a ride on the Google bus and traveled from one end of the internet to the other in search of a suitable DOS based screen capture tool ... preferably free.
I found some old stuff out there that produced weird results such as refusing to function or attempting to enter areas of my realm that were banned to them.
PANIC #2
Then as I was preparing to abandon the Google bus, there it was ... a link that referred to these erstwhile forums we are all so very fond of, and it said "orudge" too. One click later and here I be. Naturally that which I sought so eagerly was all this time right under my nose. I should have known.
A couple of clicks later and I was the proud new owner of a Vthief installation.
Having great faith in the almighty SROTU, orudge himself, I promptly followed his directions, pressed upon F12, and took a screenshot.
VTFVIEW proudly displayed the results of all my efforts and named it 0000.VTF ... but there was something strange ...
PANIC #3
I thought the world should hear about this. Pressing b as directed, VTFVIEW produced 0000.BMP which I opened in my E-Paint application and saved as 0000.png, a format encouraged by all who frequent these forums.
I present the results below for your edification and commentary.
WHAT WENT WRONG?
HEEEEEEEEEEEEEEEeeeeeeeeeeeeeeeelppp! 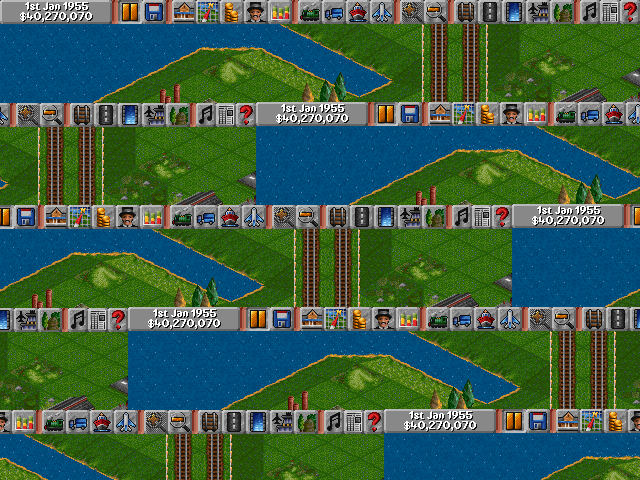 You failed to clearly indicate the first file/program that demonstrates this issue.
To get a good answer, ask a Smart Question. Similarly, if you want a bug fixed, write a Useful Bug Report. No TTDPatch crashlog? Then follow directions.
Projects: NFORenum (download) | PlaneSet (Website) | grfcodec (download) | grfdebug.log parser
Top

DaleStan wrote:You failed to clearly indicate the first file/program that demonstrates this issue.

I wrote:VTFVIEW proudly displayed the results of all my efforts and named it 0000.VTF ... but there was something strange ...

VTHIEF does not display what it does. It merely takes the picture. The game itself was fine and displayed properly. The problem lies somewhere between the scan done by VTHIEF and the rendering done by VTFVIEW which is the first program to display the output of the scan. The png is a true copy (albeit somewhat compressed) of the vtf issued by VTFVIEW. I suspect VTHIEF mangled the scan and that VTFVIEW merely delivered on what it was given.
wallyweb on tt-forums: Screenshots - Projects - Releases
wallyweb on Simuscape: Projects - Releases
Other Stuff: TTDPatch 2.6 "Nightly" download - cirdan's OpenTTD branch (New Map Features)
Screenshot Of The Month Contest Winner: August 2015 - Tied May 2016 - January 2018 - December 2018 - May 2019
Top

I have more information that may help towards the resolution of my problem.

First of all ... In my quest around the web I came across a very old post (2003) in another forum. It described the same problem as appears in my screenshot above, with the only exception being that it was a different game from TTO. Unfortunately, that post was the last in the thread and there was no resolution. So, the problem is not unique.

Next, my environment ... Windows98SE OEM running on a Compaq Deskpro 300Mhz CPU with 196MB RAM.

Some observations on running TTO without invoking VThief:
1. From the MS-DOS icon ... no problems.
2. From Restart in MS-DOS mode ... no problems.
3. From a reboot into Command Prompt Only ... TTO refused to load without a mouse. Invoking the mouse driver before calling TTO solved that.

Now, a new problem (probably related, maybe not) has arisen. In my quest for the mouse driver in 3 above, I loaded the wrong driver (The MS default one that only does two buttons). I had been using the Logitek drivers but they were hidden away under several layers of folders and were not where I expected them to be.

Now, VThief loads ok but it no longer does the screenshot thing. Furthermore, with VThief loaded, the mouse icon in TTO is extremely erratic, doing all sorts of things on its own, opening windows, scurrying about, scrolling suddenly. For some strange reason it seemed to have an affinity for the land inform tool. Exit TTO, stop VThief, restart TTO and the mouse behaves.

Don't ask me why, the answer probably lies in some obscure thread in a psychology forum somewhere out on the web, but I decided to trash my Logitek set up and go with the Windows default driver. Sure enough, the erratic mouse issue appeared in TTO with VThief loaded, no matter how I accessed DOS. Stopping VThief cleared the problem.

In a brief return to sanity, I searched in vain for my long lost Logitek install disk, went onto the web and downloaded and installed the Logitek software. I thought I'd be back to where I was before. NOT! The mouse icon in TTO with VThief loaded is still scrambled, no matter how I access DOS.

Obviously there is a conflict somewhere between VThief and my mouse setup.

Any hints as to where to go to resolve this would be greatly appreciated.