Sorry I didn't reply sooner, I came off straight after posting the 'A-HA!' message. I haven't got a program that saves PCX files, so I've just posted the one with the fixes you made. Hope you don't mind!

Thanks csuke! My first train! In the game! I'm getting carried away!

I've not been on much recently, because I've broken and then fixed my PC a couple of times. It's fixed now though, so I'm back!

Just a few questions though:

- It looks like it's a few pixels out of alignment with the track; is this because the blue boxes I put around the sprites is larger than the ones in the TTD GRFs?
- It was supposed to be in both company colours, but it isn't, only the blue shade it was coloured in. The page in the Wiki said I should colour the carriages this colour and TTD would replace it with the company colour. Same for the 2nd colour. Is this my error, i.e. choosing the wrong colour, or do you need some extra code in the NFO to make it company-colour compatible?

Bit 1 of the misc-flags property (27/1C/17/17) must be set for a vehicle to use 2CC.
To get a good answer, ask a Smart Question. Similarly, if you want a bug fixed, write a Useful Bug Report. No TTDPatch crashlog? Then follow directions.
Projects: NFORenum (download) | PlaneSet (Website) | grfcodec (download) | grfdebug.log parser
Top

Is that for the first company colour as well? I don't want to make any excess work for anyone. If it needs some coding, then I'll just recolour it back to yellow.

I've also got some initial ideas for different liveries from British railway companies that utilise the 2 company colours. For instance, if the player wanted an Arriva train, they would refit it to that livery and the patterns on the sides would be drawn in their colours. Just an idea, though.
JontySewell.net | twitter | last.fm | tumblr | YouTube | RaW 1251AM
Top

The main CC is applied by default, but the secondary CC needs that bit set so the second CC isn't unceremoniously dumped on vehicles that are not supposed to be CC. (eg those in USSet, DBSet[XL], &c.)
To get a good answer, ask a Smart Question. Similarly, if you want a bug fixed, write a Useful Bug Report. No TTDPatch crashlog? Then follow directions.
Projects: NFORenum (download) | PlaneSet (Website) | grfcodec (download) | grfdebug.log parser
Top

So have I coloured the sprites wrong then, because I only get the blue they are, no matter which company colour I choose.

edit: yep, you've used the standard blues instead of the cc ones

Sorry, I've not done it yet, what with my PC problems, Christmas and everything. Watch this space, though! I'm also going to try and start a village station like the one in the picture a few pages ago.

Oh, and Merry Christmas everyone!

I've had a go at drawing one of the sprites for the station platform I posted a pic of a few pages ago, but my PC is completely buggered at the moment and FF crashes when I try and add an attachment, so you can't see it yet. I'm hoping to have fixed it by this time tomorrow, though!

P.S. I know everyone says that you should finish a train to perfection before starting a new one, but I can't modify the Pacer at the moment because I lost it from the backup and FF also crashes when I try to copy it into SpriteEdit.

The idea is that the hut goes in the middle of any station. I'm also going to do ramps that go down to track level at each end.
stations.png (1.42 KiB) Viewed 3915 times

UPDATE: Changed the red to Company Colour (I'm sure it's CC this time:- I used Szappy's SpriteEdit and it tells you which is CC:D)
Added some small bits of second company colour, but SpriteEdit doesn't say which 2CC is (understandably) so I don't know if it's right. Anyway, it looks OK without 2CC.
Did the first south ramp. Slopes are difficult! Also added a little dirt path going to a company-coloured gate. It looks so English!

When I'm done (all views:- might take a while!), I would be really happy if someone/some people would code it, as an English Country station. Then, perhaps I could work in collaberation with PikkaBird on his UKRS, or with the people who are making the BR set (if it's still going)!

Bit quiet around here at the moment...
Five posts in a row!

Anyway, I've fixed my PC for now, and here's the south ramp: 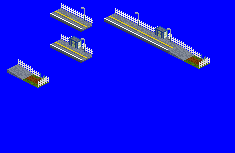 Excellent. I was thinking of doing something similar myself, until I remembered that I can't draw...
He's like, some kind of OpenTTD developer.
Top

Phew, updates thick and fast! I was talking to Aegir in IRC, and he told me the hut went outside sprite limits, so I've made all the platforms more compact:

that looks excellent!
"On the other hand, I have different fingers" -- The rascal formerly known as astath, loathing you and more specifically your religion. Anti-theist, be like it. -- Last.fm -- Official TT-Dave Worley Fan Club -- Good times.

There is a problem however, with the trains. The trains won't be stopping at the end of the yellow lines, but rather drive all the way to the end, so they will stop on the ramp with the first two carriages. Or you code them as non accessible station tile, but that means that you can't use it as drivetrough stations, only for terminus, which would make no sense for such a layout.
*** Ce French Train Set ***
*** Visit my transport related pictures on Flickr ***

Do you get what I mean?