athanasios wrote:Why should we stick to 8bpp for a + grf?

IMO, 32bpp will only work if everything is in 32bpp, else things still end up looking funny. While I do see some great results in the 32bpp camp, I don't see any great progress in an attempt to make a 32bpp version of every original sprite.

Dear Athanasios, do you want to limit TTDPplayers this set too?

And the general idea of this set is 8bpp Replacement.. 8bpp wont go away anywhere as is already stated.
PS: And I stopped the propaganda to support Dave Worley since he got a nice new red hat now.[/color]
I know I have a BBCode error in my signature but I really cba to fix it.
Top

Draw it in 32bpp, convert to 8bpp, and provide the 32bpp version for optional activation...

*but* make sure you add some noise (dither) to the conversion

The point was to adjust existing 8bpp sprites and create liveries in 32bpp and not draw from scratch and convert back to 8bpp.
Regarding TTDP players they are already restricted in many things. They can use 8bpp opengfx. If they want + sprites, they have to use OTTD or wait till TTDP gets support for 32bpp. But + shouldn't aim to be compatible with TTDP. Eventuallly + is going to have a lot new sprites. TTDP currently cannot support so many sprites.

regards
athanasios
http://members.fortunecity.com/gamesart
"If no one is a fool I am also a fool." -The TTD maniac.

I think if OpenGFX is in 8 bpp, any OpenGFX+ should also be in 8 bpp.

Creating a set in 32 bpp is just fine, but it should not be an extension of the aforementioned OpenGFX set per se. Nor should it be advertised as an extension of OpenGFX.

Personally I don't feel like wasting time for an 8bpp extension of OpenGFX. Yet the extension could have both 8bpp and 32bpp and parameters to use both 8bpp and 32bpp or only one (e.g. for TTDPatch). The lack of a 32bpp OpenGFX project and a + OpenGFX has resulted in various sprites here and there which were not completed and were never coded. I think it is better to open a new thread for + OpenGFX and let the artists decide in which depth they wish to draw. Of course anyone will be allowed to convert/draw the missing depth of a sprite, if the artist provides only one of the two depths. Take into consideration that this project will aim for normal tileset (64x31). The size is small and allows pixel drawing.

I suggest that this thread also hosts 32bpp pngs, but with the limitation of drawing 32bpp sprites only for already existing 8bpp sprites.

Those interested (artists, coders) for a + OpenGFX please pm to me, as it is not wise to expand more here.


FooBar wrote:Creating a set in 32 bpp is just fine, but it should not be an extension of the aforementioned OpenGFX set per se. Nor should it be advertised as an extension of OpenGFX.

I respect your opinion, but I do not view OpenGFX as a "set". OpenGFX has the aim to replace all the original sprites with new ones and so become the standard/official OTTD artwork.
Since OTTD supports both 8bpp and 32bpp we should first provide sprites for 8bpp and then draw an equivalent for 32bpp. For me sets are grfs like DBset, Canadian Stations... On the other hand grfs similar to New Ships, aviators aircraft, generic road vehicles could be part of a + OpenGFX.

regards
athanasios
http://members.fortunecity.com/gamesart
"If no one is a fool I am also a fool." -The TTD maniac.

I think the Opengfx should remain for full 8bpp. Its still simple, its blitter works very fast, and many artwork designed for 8bpp, we don't need millions of colors to achieve a wonderful graphic, why we need 32bpp? Personally I dont like to mix 32bpp artwork with the 8bpp ones. Its make confusion. I think the two projects should remain separated.

As far as I am aware, 8bpp is much faster than 32bpp, and as such it is still important that this project remains seperate from 32bpp. If the graphics are just 8bpp versions of 32bpp then thats fine, but particularly for things like openttd on mobile phones and old computers, we should keep it seperate.
previously known as daylight
Top

As you said Athanasios, the aim is to replace all current graphics. Same is with the current 32bpp Project. so take the other project as 'OpenGFX 32bpp' and be happy

This thread here however will stay as 8bpp. And btw, don't mess up OpenGFX and OpenGFX+. The non-plus is yes, not a set, but a replacement, but +pack will be a set imo.

The other thing is that when we also start gathering all files from Blender thread again it will be a b**** to maintain. Let OpenGFX(+) be 8bpp and the other project 32bpp. The people will start to confuze those two anyway, why should we help them doing that?

So a no from me. But let's see what Zephyris thinks too, although I doubt he doesn't agree with me.
PS: And I stopped the propaganda to support Dave Worley since he got a nice new red hat now.[/color]
I know I have a BBCode error in my signature but I really cba to fix it.
Top

I'm also in favour of keeping 8bpp and 32bpp seperated. If "we" one day achieve a full replacement of the original graphics, i'll love to play with them, and i then also want graphics for new and additional features in 8bpp, and not a mix of 8 and 32 bpp. If one day the 32bpp project finishes or is complete in great parts, i'll also love to play with it, but then only with 32bpp.
And, like already pointed out, 8bpp is better for older pcs or portable devices. I guess even my pc would have problems with handling a complete 32bpp set...
Top

In terms of a 8bpp or 32bpp "+" set again I think the projects should be separate:
An 8bpp "+" set's role is to make some of the new features newGRF has made possible easily available and in a style identical to the openGFX graphics - things like rivers, coastlines, driving-side specific road graphics, livery overrides and tenders, etc. These will always be optional.
A 32bpp "+" set is 32bpp versions of 8bpp graphics, not additional features!

In terms of organisation all big projects are a nightmare, and recently with me being busy the openGFX project has fallen apart a bit. Part of this problem may well be the overeagerness of artists to produce the "+" graphics - for example at the moment I am distracted by my generic road vehicle set which in many ways is a "+" set. It is tedious to go through and simply draw your own version of hundreds of sprites! The biggest thing for the time being is not to worry about the "+" set, or the 32bpp set, or what they are going to be called, or how many sprites are getting lost and never coded, just draw the graphics and push someone to get them coded! The way to make a project stall is to discuss it to death, the way to get it going is to ignore the problems and just get the graphics done - once the graphics are done all these problems are irrelevant.
GRVTS/eGRVTS --- Generic Tram Set --- UK Town Set --- zBase ---RichardWheeler.net
Top

What do you think of these toyland mushrooms?

Very nice! Couple of issues though - in the fifth and sixth sprites you've used toyland water action colours, and there should be seven sprites (so one more rotting stage it looks like).
Top

Argh.. k I'll do the seventh

.. And I'll run the rotten things through palconvert anyway later because they shouldn't have any action colours in, the first ones though have cc as in randomising colours. And I think that let's stick to default ttd palette even for toyland.
PS: And I stopped the propaganda to support Dave Worley since he got a nice new red hat now.[/color]
I know I have a BBCode error in my signature but I really cba to fix it.
Top

But you can't. Toyland uses a different palette. And, for the umpteenth time, the palette is not encoded in the GRF.
To get a good answer, ask a Smart Question. Similarly, if you want a bug fixed, write a Useful Bug Report. No TTDPatch crashlog? Then follow directions.
Projects: NFORenum (download) | PlaneSet (Website) | grfcodec (download) | grfdebug.log parser
Top

Ok.. then let it be toylandish.. I'll complete the last tree later though.. Now, I want to show you a taster of some building, I don't know what building though

.. Mayeb it will replace the mall

the reflecting part will eventually be a glass-windowed wall like here. And I'm not happy with the already finished glass wall at entrance either.. But stay tuned 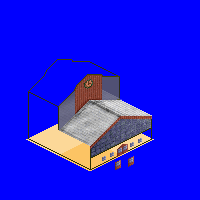 The differences between the toyland and normal palette are irrelevant for most graphics, it really isn't something to worry too much about. 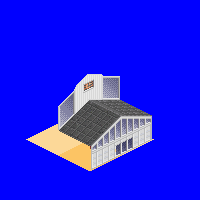 
The first version of unknown.png reminded me of a small theatre I know in one town.
Top

Ok.. the last wall to do :)And after that I think I'll let Zephyris add some noise 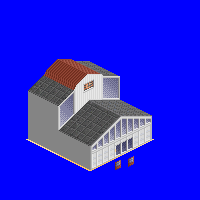 PS: And I stopped the propaganda to support Dave Worley since he got a nice new red hat now.[/color]
I know I have a BBCode error in my signature but I really cba to fix it.
Top
Post Reply
3423 posts