Hi all, I've spent the day working on some NewObjects for the American Road Replacement Set, and rather than muddle up the release topic any more I decided to start a new one.

What I've got so far is very, very simple; basically just a proof of concept. The main focus so far has been with road-overlapping objects that allow you to create the look of an american-style freeway, in 4-lane, 6-lane, and even 8-lane variants, complete with transitions (no corners yet, though). Unlike Dutch Road Furniture, which basically just adds some shoulder to the sides of the road, these objects cover the whole road surface in order to change the paint markings on the road to create the full effect of a true freeway. This inevitably leads to some nasty graphics glitches however, so the objects have been designed to be "doubled up", such that each object overlaps another when placed side-by-side along the road. This effectively stomps out 99% of the glitching, but the placement of the objects might take some getting used to at first. Once things like intersections start getting thrown in, such "doubling up" of the graphics may not be practical, so some glitching is to be expected, though I'm trying my best to make it a non-issue.

I've also thrown in some (very) basic parking lot objects, since that seems to be something people would like to have available.

There is no slope or ground tile support yet, so using these objects on anything besides flat ground will not work, but it's enough to get a feel for what it will be like. Also the menu for the freeways may not be completely understandable at first glance, so you'll just have to play with it to figure out what everything is. Here's a picture showing the basic result: 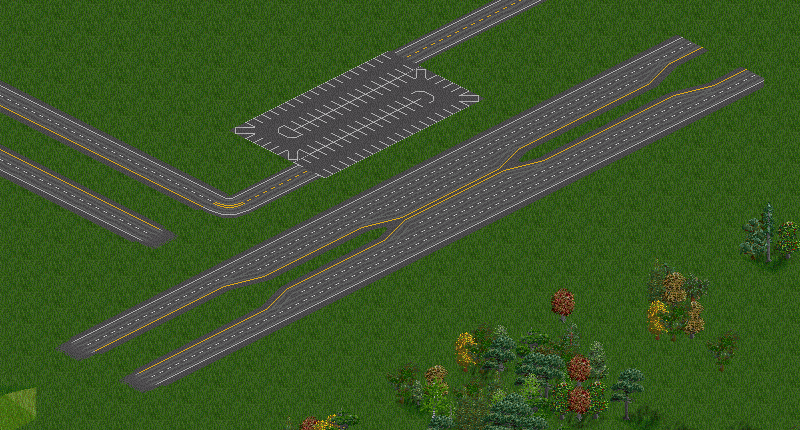 Note that there are objects along the top edges of both roads, not just in the middle of them
objectspreview.png (117.12 KiB) Viewed 7569 times

I have many more ideas for things to be included in the set, so this is in no way a representation of the final product. That said though, if there's anything you would absolutely love to see in such a set I'd be interested in hearing your suggestions, maybe it'll give me some new ideas. Play around with the taster and let me know what comes to mind.

I like the fact that you have decided to do

. Looks beautiful. Now players will be able to build a motorway. Waiting for a new version of this set.
I also like the fact that now I can use exactly the same cover roads, including bridges. 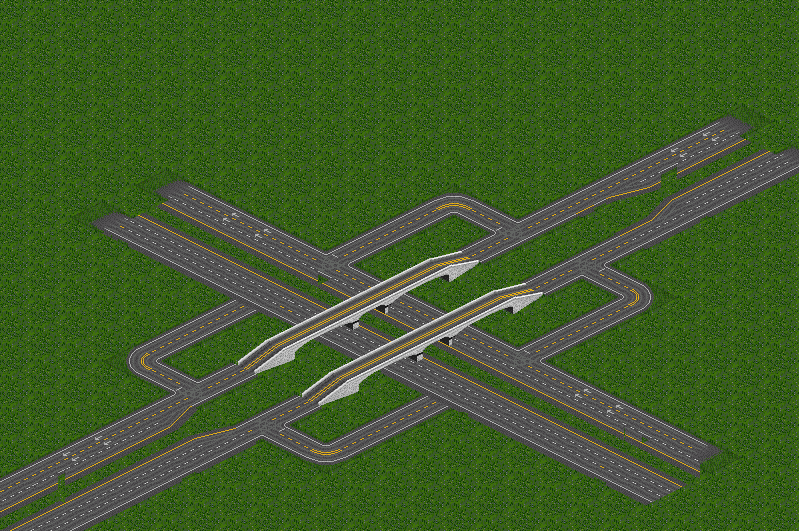 Great, but somewhere there are yellow lines somewhere, and somewhere white.
Top

yes, is difference
(Everybody) SkiddLow's Back, alright.

Well, clearly these objects are not very intuitive to use in their current state. Some proper gui sprites and a clear in-game description will definitely be necessary to help clear that up.

There are two separate objects that need to be placed for each section of road, not just the one in the "middle" as you've done. The other must be placed along the "top" edge of the roadway, this will cover up the rest of the road. I'll add a picture to the first post to show the results when done correctly, maybe that will help in understanding it a little bit.
WSF Ferry Set [WIP] || American Road Replacement Set || NightGFX Base Graphics Set || Wasteland [WIP] || RattRoads || American Bridge Replacement Set [WIP] || CONVEYOR BELTS || Cursor / GUI Replacer
Top

Mind the pillars randomly placed in the HOV lanes... 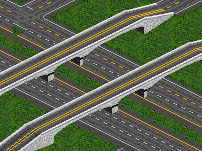 How about, as a suggestion, overlaps for freeway onramps (which would overlap/hide the t-intersection)
My screenshots
A fractal heightmap generator for openttd
Top

kamnet wrote:Mind the pillars randomly placed in the HOV lanes...

Yes, it's a good thing drivers in TTD don't know how to get out of the slow lane!

How about, as a suggestion, overlaps for freeway onramps (which would overlap/hide the t-intersection)

Should be possible, as long as you don't mind your vehicles seemingly veering off the road at the last second every time to make the exit.

And mind you they would only be 1 tile long, though that's not really a problem. I'll have to experiment with this one and see what I can come up with.

Ha, nice one! Maybe you can make the Jakarta highway system!