I've done a REAL thing - I've only coded a chuffing train! (it doesn't chuff, though).

After the various BR Set meltdowns over the years, I am in possession of a repository of sprites which are also available in a couple of places online.

I've taken my favourite Class 153 and used it to learn how to code with NML.

I attach an Alpha grf with:
A Class 153 in Regional Railways livery (its original colours)

I'm NOT going to put it on Bananas JUST YET. But it will go on. 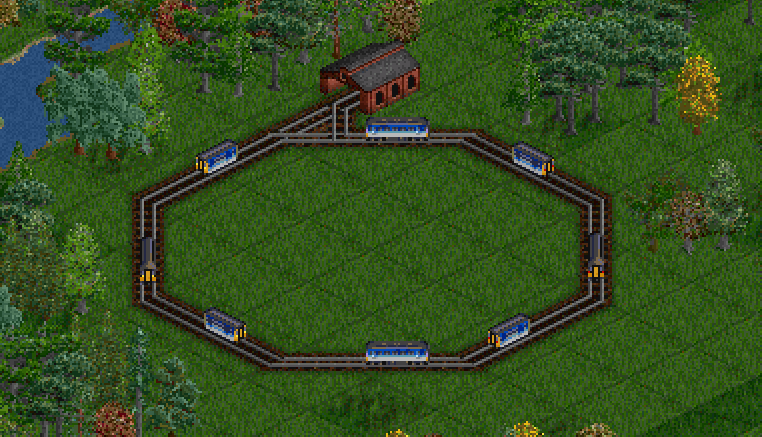 Features:
- I have given it 36 passengers - 1/2 of the real life capacity. This is the only game balancing I have attempted (and will do the same for any further British stuff I do).
- Lights work correctly (white headlights, red tail lights)

There are the following issues:
- The purchase and running costs are NOT aligned with any set, including the default.

I would like to add:
- Livery refits to match the colours 153s have held since the end of British Rail.
- More balanced costs.

I have made the following assumptions about the sprites:
- As per all the work which was drawn for the BR Set, BROS, etc, I have assumed a GPL v2 License exists on the sprites.
- Even if it does not, I've taken the liberty of coding the sprites anyway - I imagine there'll be very few objections to this.
- I am not getting into a copyright argument - considering the number of sprites floating around the forum "awaiting a coder" I'd hope this was welcomed!

Most importantly:
The sprites in the repository were not identified by artist. As such I've used a pseudonym: Brian Robert Sett (B. R. Sett) as the graphical artist. I intend to do this for any of the BR Set stuff I eventually come round to code. If you can show me that you or someone else did the graphical work, I will change the credits to reflect that.

Do a Scooby-Doo next, then you can learn how to code pax / mail refits, also cargo loading states

Dave wrote:- Whoever drew the Regional Railways livery managed to use a company colour, so the light blue stripe goes the colour of your company.

it seems a little bit misaligned?! have you tested it with other grfs? but good work at all.
Top

it seems a little bit misaligned?! have you tested it with other grfs? but good work at all.

It almost certainly is. I'm going to look into it at the weekend - I'd like to get this one as close to right as I'm able before moving on.

Thanks for the comments, everyone.
Official TT-Dave Fan Club

I've corrected the issues I laid out above, I think. First post updated.

Pikka's kind advice has been implemented, I've compared the alignment with the passenger carriages of OpenGFX and corrected accordingly, and I've also shuffled the sprites now so the head and tail lights are all aligned (although still only number 1 end - I'm not convinced having asymmetrical views is all that worth it, but we'll see.

The costs are still off but I'm ITERATING MY WORK AND SHEEEEEEEY- well you know the rest.

There's an updated GRF and image in first post - also below with all units reversed so you can see the different lights!

And there, in all its glory - 153311 serves the small village of Porthouse!

Necro! Looking good Dave! Was there anymore progress with this?

Nope. But maybe when I come back round to playing again. I'm in a cycle of not doing so atm...!
Official TT-Dave Fan Club

Anything Sprinterish, chances were it was me. Consider my borking of CCs as proof, I guess? (my HDD crashed so I have no backup of sprites to back that up).