Screenshots of your games! All Transport Tycoon games acceptable (including TTDPatch and OpenTTD).
Post Reply
61 posts

After playing openttd for a long time I decided to create my own screenshot thread;
First of all, I'm playing a japanese style game but I had some problems with the newgrfs before starting the game so the town names are english

Secondly, in this country their is one national transport company divided in 3 sub companies: National railways, Interurban railways and the latest founded company High speed railways. High speed rail is still in test phase and only serves countries closest to Punborough, the city where all rail development started and still is being improved. This city is the intellectual capital.

So naturally first a screenshot from Punborough, home to the countries oldest university well known for innovation and high end technology, and even though being small and remote it has frequent rail connections to almost all cities in the country.

Second screenshot shows Cadinghattan, the first major city after Punborough situated on a small stroke of land. The city's appearance changed a lot after major investments from Cadinghattan to integrate the High speed line via bridges next to the city centre.

Next shot shows Suninghall - Dunfingburg region. Suninghall main station is for now the end station of the Interurban Habourne - Suninghall line. An extension has already been prepared and will be executed soon. Dunfingburg's main station is now also the last High speed terminal since the project has started. Plans are to create a second HS station further away from the centre to server Funnington and Prinfinfor greater area once test phase has succeeded. This way the city centre can be preserved

Kaguyaki Transport, 18th Oct 2035.png
This area shows a fine example of integration between all companies. In Suninghall Platform 1 to 3 are national railways where 4 and 5 are Interurban. You can see the bridges prepared for the extension of the line. For now however it is still a turning loop. Dunfingburg has 2 platforms as HS terminal and all others for national railways.
(339.13 KiB) Downloaded 5 times

I quite like these!
|||| My OTTD/TTDP pics ||||Currently slighty obsessed with getting Platinum Trophies||||Retired moderator||||
Top

I still need to spend A LOT of time on OTTD to get mine to look like this.
Very much a retired regular poster..... If you can say that

Now a moderator for a full time streamer. PM me for details.
Top

Thanks for the kind comments!

First screenshot shows the new HS station in Suninghall constructed out of the centre, with Interurban Railways serving the station by connecting 2 lines creating an Interurban line connecting all cities around Cadinghattan Bay.

Second shot show Wunthill's main station. The area has just been completely remodeled. HS line has been extended and runs through Wunthill too Fardhead Cross.

Last shot is Funnington, which is the only city center connected to Prinfinfor greater area via an Interurban railway. The HS line is not yet connected to the network, but will be as soon Tabourne's authorities allow the extension of the station.

Shot one shows Leborough bay's main station for Greater Prinfinfor's Interurban network. 3 out of 4 lines use it as terminal. It evolved from a single line station, to it's current form with HS extension from Fardhead Cross.

Second shot show Fardhead Cross main station. Served by 2 HS lines, 2 Interurban lines and terminal for 4 National lines you can reach all possible destinations with a maximum of 2 transfers. It's also the Nort terminal for the Cadinghattan bay Interurban line.

Nice shots! I like the big plaza with the tower in the middle. Also, you have an interesting variety of trains with some... unorthodox combinations

Emperor Jake wrote:Nice shots! I like the big plaza with the tower in the middle. Also, you have an interesting variety of trains with some... unorthodox combinations

Yes well honestly I can't be bothered about their configuration, I just want to build and improve my network!

I mostly care about integrating all infrastructure nicely in cities.
Top

A lot has happened lately: HS Rail perfected the Vacuum train and implemented it into the entire country, IU invested heavily to connect a lot of local lines increasing the density and service level of the network, and on political level some city centres merged to form big urban areas modelled as Prinfinfor.

1. Prinfinfor main station, where all but 3 NR lines stop, and the only Prinfinfor centre's HS halt.Prinfinfor East and Prinfinfor South can also be seen. Prinfinfor East is installed next to Exposition park where the skyscrapers are the first landmark people coming from the East see. Prinfinfor South is a halt for an IU line half circling the city center and eventually ending in Tabourne East, and 2 National Railways lines. Due to space issues in the centre no IU line stops at central, however frequent Greater Prinfinfor regional trains are operated by NR to guide passengers to following stations connected to IU netwerk.

2. Prinfinfor - Leborough Bay Main station. The station is a huge center used for many different purposes. It includes hotels, restaurants,bars, a museum and many more. Also 30 % Of trains coming from Prinfinfor Centre stop here where aforementioned IU line to Tabourne starts.

3. Prinfinfor - Dunninghall is constructed next to one of the infamous millenium towers. Having 2 out of 3 Prinfinfor IU lines attending here,next to 70% of passing NR traffic from Prinfinor central, makes it an often chosen starting point for tourists to visit the city.

4. Prinfinfor Exchange, a station not often visited by tourists, but important nonetheless. 2 IU as well as 4 NR lines halt here.
It also attracts lots of people from the suburbs coming by car, profiting from it's position on the outskirts of the centre.

5. Tabourne's East station, which was constructed in a very late stage of the city's development. 2 IU lines where added, after NR made an extension from it's Cadinghattan line, creating a somewhat ringlike system around Tabourne bay which was asked for by city council since ages.

6. An overview shot of Tabourne Bay.

7. A close shot of the the trackworks heading to Tabourne. Here no less then 6 NR lines and 4 HS lines meet.
There is no other spot on the map where this little space gives way to that many different lines.

8. The trackworks before Funnington. Here 2 HS and 3 NR lines head for Funnington Central, where 2 other HS and 3 other NR lines branch off to Prinfinfor. Underneath the only IU line in Funnington heads for the suburbs. Although less lines pass here then previous entry, it sees way more traffic as it's integrated in a bigger urban region.

9. The latest addition to the IU network, a terminal as extension for the line coming from Prinfinfor - Leborough bay, and the startpoint of the newest IU line to Tabourne East.

And lastly, the map

Loving the screenshots. I like the town up in the snowy hills, like the way it sits on the hillside in the shadow of the papermill

First shot shows Prardtown, where the station building has been built across the street from the actual platform due too space restrictions.
The lower platforms are reserved for interregional transport, where the upper platforms are intercity only.

Third shot shows Feham, a small city where the infrastructure was not adapted to say the least untill nearby region capital Drendinbridge invested a fortune.
The 2 platform station could hardly handle the heavy oil trains combined with all of Drendinbridge passenger lines passing. The station was upgraded to 4 platforms and a failed tunneling project from years ago was transformed to redirect freight underneath the city. the small passenger harbour can be seen together with a small tram line connecting both. 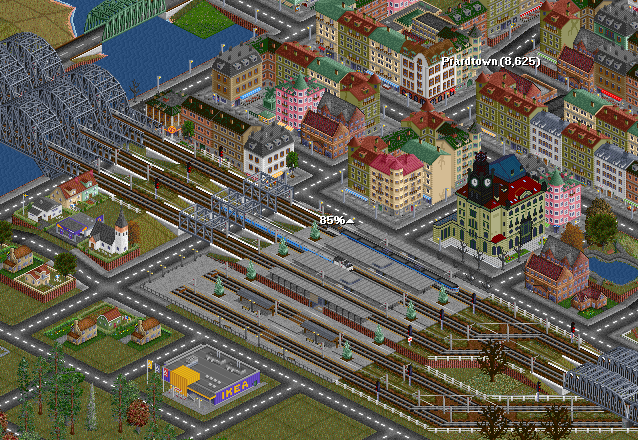