Screenshots of your games! All Transport Tycoon games acceptable (including TTDPatch and OpenTTD).
Post Reply
928 posts

Following on from a discussion in #tycoon...

So, lets see how it pans out. Perhaps it can rival Jim's thread in all its glory! Or perhaps not

At any rate, here's the scenario I'm playing at the moment, along with ttdpatch.cfg, and a newgrf.cfg

Freihaven Pass, 1938. When the tracks through the area moved from being a lonely passing loop to a full-blown double-tracked mainline, engineers decided it would be easier to avoid the snow if the new track was built lower than the original. However, funds would not permit the lowering of the other track, as that would be quite a good deal of landscaping. This work has all been done in preperation of the expansion to Freihaven Station, as Freihaven is quickly emerging as the ideal main interchange for the rest of the network, instead of Schweinford.

Freihaven Station, 1938. During 1938, much work was done to expand the stations capacity to allow for terminating shuttle trains from Schweinford, as well as through trains that terminate at Schweinford (it will take a lot more work here before this station is capable to handle the current terminating traffic). This is about one third of the way through the stations multi-thousand DM redesign.

The second shot of Freihaven shows the station nearly all the way through the upgrade. Trackwork is mostly completed, and the redesign of the station concourse is now underway.

EDIT: Urk, it all ended up out of order. Order *should* go, "Freihaven Pass", "Freihaven" and then "Freihaven 2" 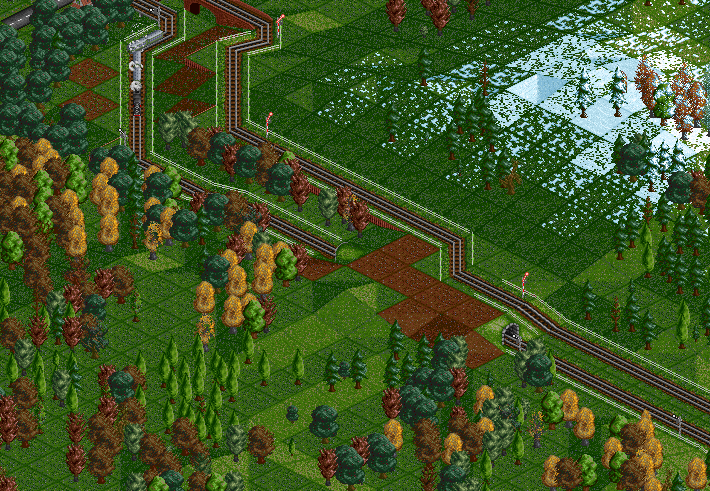 The two shuttle trains that will run connecting services between the Schweinford Interchange and Freihaven Interchange have been purchased by the end of 1938, in the form of two VT-137's. High-speed express DMU's complete with luggage racks, they will be a twice-daily service between the two towns. Certainly a lot faster than waiting for the twice weekly mainline express train that continues beyond Freihaven. Also, tickets are cheaper. Early patronage levels indicate that there is clearly a good market for this level of shuttle service, and a note is made to investiage this further. Perhaps with more 3-car sets?

By mid 1939, Freihaven Interchange is finished. At least, for the time being. The next plan on the cards is to increase the stations capacity once again for trains to terminate when coming from the north-western line (currently all of those trains continue through to Schweinford), as well as build a new terminus to accomidate the planned western and south western lines. These will probably be built at a 90 degree angle to the current tracks, as there are no plans to have through trains running from the south-west or south line into Schweinford (the station simply wouldn't have the capacity, nor the room to expand). 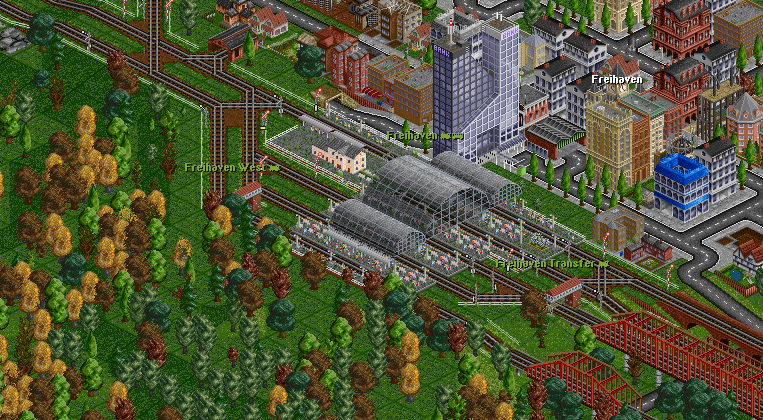 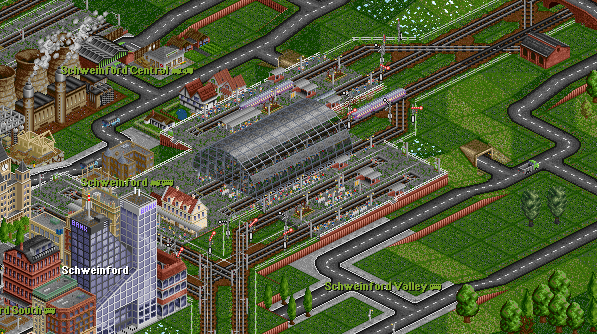 Now, rather than going to bed (which would be the sensible option), I let lack of sleep get the better of me, and came up with this rather silly design...

It seems to work okay so far!

Now, note that all of the "empty" platform tiles are all part of the one station. The top two are for coal/food/goods trains coming in from the east, whilst the other hodgepodge of platforms are to service the ever growing (9 trains from 4 coal mines) coal traffic coming down from the alps.

Yes, I think I better get some sleep before I start building platforms over platforms, lomo style

Nice screens and you definantly deserve your own thread for your excellent screenshots!

I never knew there was a 'plant trees' sign cheat. Learn something new everyday i suppose

Some nice screenshots indeed, looking forward to the next ones!

I'm not sure whether I should smile, because your networks are awesome, or cry, because I'll never make anything close to them

More madness from beyond the real world...

The first two shots are based around Michelford, where a new industrial line has been opened up to support the fleet of lorries struggling with the towns ever expansive coal mine.

An old BR75 was pulled into duty here, along with 5 brand-spanking new gondolas, simply because the lorries could not keep up with the coal production. Two new deep-bore tunnels means that the full train does not have to go up any hills, thus saving expenses to be spent on more expensive locomotives later. 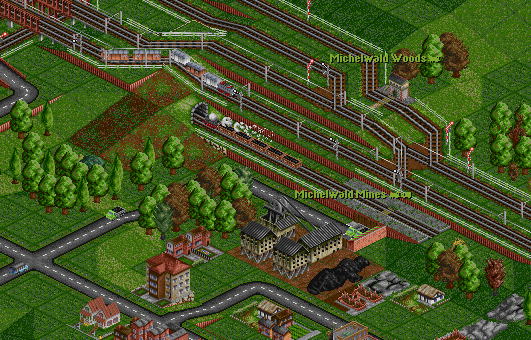 Meanwhile, plans are already been drawn up to get more food up to the mountain towns. Construction of a new food proscessing plant at Muhlford (the planned terminus of the alps line) should help, but there is the small matter of getting the raw materials UP the mountain in the first place. Enter from stage left, a pair of Krokodils.

Also enclosed is a shot of the sidings, taken before the truck-loading bay was fully constructed. The food provided by this plant shall be shipped by truck all around the mountains, to help encourage favorable town growth, and to feed the ever-growing number of ski-tourists that venture this way each year.

Plans to have the passenger link to the town built are due to be finished in 1950. Assuming the town co-operates that is, they have been rather tricky of late... 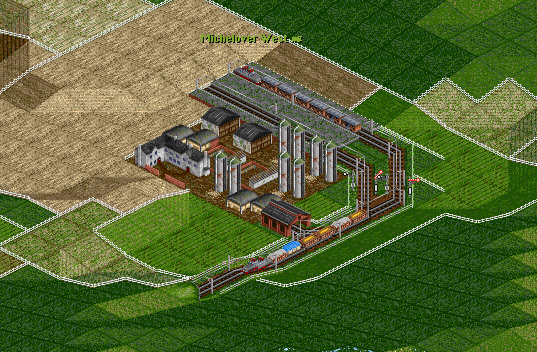 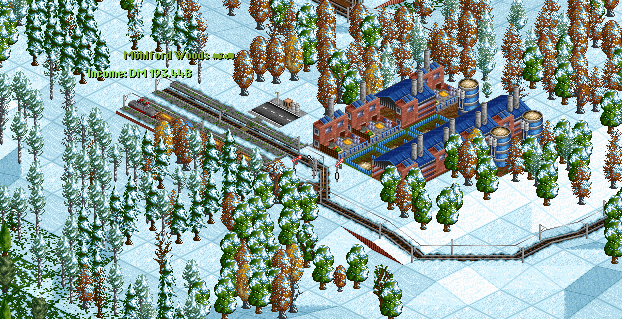 To open your own thread was one of the greatest ideas you ever had! I am always waiting for your great shots appearing in the screenshots thread. But from now on, there is direct way to find them.

I will pay the earned tribute...
Top

Thanks for all the encouraging comments guys, but I'm just sharing pictures of my games. I've always aimed to have visually pleasing networks, and the fact that you guys enjoy seeing them too is the icing on the cake

The final batch for tonight shows the completed Central-West line, as well as the construction of the new Northern Branch.

The first picture shows Pfungbruck, one of the towns to be majorly affected by the upgrade. After many weekends of rail shutdowns, and non-stopping trains, the station upgrade is nearly complete by Winter 1946. Due to the town having a very slow growth (no employment, and the current rail service, while high-quality is infrequent), there was no need to expand the station concourse anymore. Thus, the whole station was wired up to be part of the new line, which was now to run via Pfungbruck, to increase train-stopping-frequency.

Also enclosed is a shot of Cloppenmund Terminus, a terminus where the track-space and platform space far outstrips it's current demand. Thats all part of the master plan though, as it prevents more station work from needing to be done in later years. Currently, residents are still getting used to the fact that trains are only departing from platforms 2-3 and 5-6. Occasionally you have the confused resident waiting on platform 1, only to begin a fast dash to platform 2 to get his train.

(A small trackwork error at the northernmost platforms was pointed out to me and has since been fixed. However, the rest of the station seems to work as normal

Two ET-11 sets were purchased to run on this line, as they offered a good combination of speed and power, whilst still having the advantages of an MU (faster turn around time, invaluble at tiny terminii where room for shunting is nil, as well as allowing shorter platforms). The final shot in this post shows the first of the pair at the first stop north of Cloppenmund, Innsgen. It's spring currently, and the trees are starting their green sprouts, and the baby birds are everywhere! 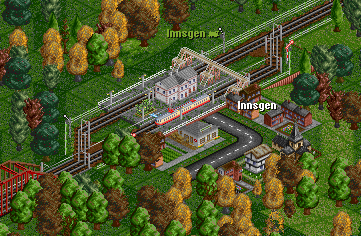 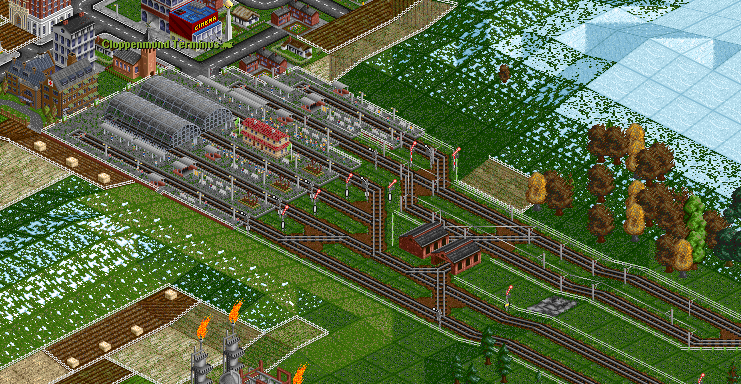 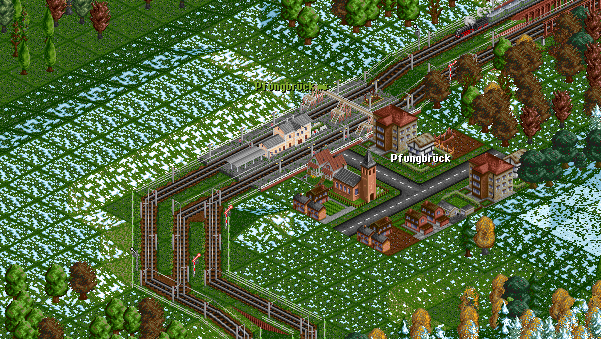 Next stop on the line is Cloppengen, a small town very dissapointed that it wasn't included on the mainline. A nearby coal mine ensures that this town will have a part to play in the years to come!

The second shot on display shows the ET-11 joining the mainline to head into Pfungbruck. Just to the north of this junction is the aforementioned coal mine, as you can imagine, it's an ideal place to be. Just to the south of the junction, an older BR18 is rattling along with an all-stops to Cloppengen*.

Finally, we have Pfungbruck in Spring, with the station upgrade completed. The station was designed back in the early 30's, and was expected to have to cater for long, cross-country steamers such as BR18's and BR01s on all-stops trains. However, today the reverse seems to be true, as, unless patronage improves, the all stoppers will soon not be stopping here, and passengers will have to catch an ET-11 into Cloppengen, to change onto a BR18 there.

Indeed, the plans for a complete bypass are already being drawn up...

* Currently as the line is still more or less single track, the Central-West line is only serviced by BR18's with mainline coaches. Eventually, when proper turn-around facilities are built at Freihaven, and patronage improves, it is planned to have regular express trains going non-stop between Freihaven and Cloppenmund. Hopefully this will happen PRE-electriciation, which is not planned for many years, but we will have to see how progress on other parts of the network goes first (I'd far rather have more towns connected than a fancy express service at this stage of the game, as the allstoppers are making enough profit to survive). 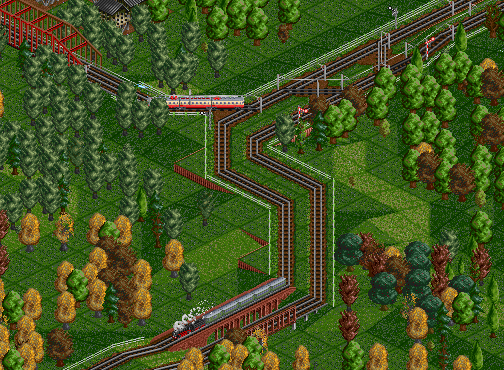 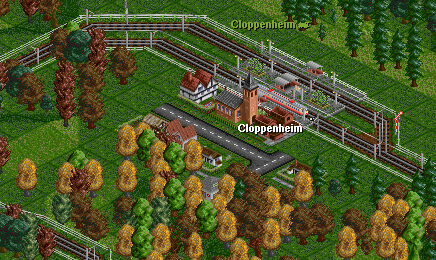 Here we can see the minimal work done at the northern junction. Literally, it was a case of laying some more rails and slapping the overhead wires down (and then signals, which cost a packet...). Far simpler than some earlier junctions...

Wildeshaven is the current terminus. Home to both a dense forest, and an iron ore mine, it's certainly under-sized. Most workers are now choosing to live in the city, and travel out here each day on the shiny ET-11. Who could blame them?

Finally, a nice shot showcasing the old and the new, as both a BR18 and an ET-11 load at Pfungbruck, now well into the summer months. Who knows, could this be the last train stopping at this station behind steam? It could even be the last steam train to pass through the station, if the bypass goes ahead. 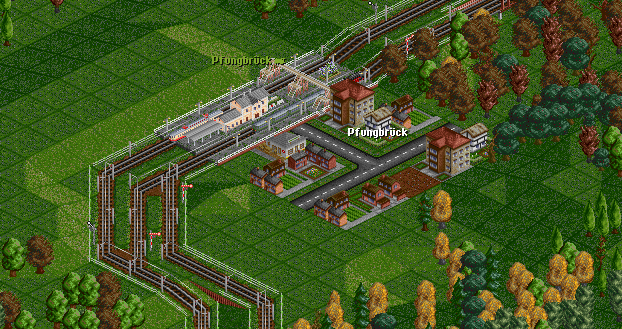 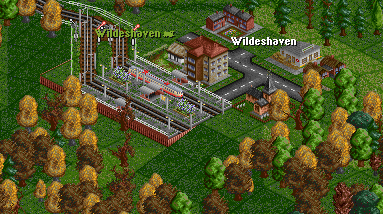 Also, have a savegame.

Nice screens Rai!! Keep them comming!
Due to cutbacks, the light at the end of the tunnel has been turned off.
Top

I love your screens!

All shall kneel before Raichase

I warrant you to post more screenshots, as I have some spare drool in my throat and mouth

Because I NEED to see more of his screenies, that's why.
Formerly known as Lachie
Top
Post Reply
928 posts