Screenshots of your games! All Transport Tycoon games acceptable (including TTDPatch and OpenTTD).
Post Reply
107 posts

THIS SAVEGAME IS FINISHED AND UPDATED FEBRUARY 2016

TIP: If you want to download the savegame and running it, maybe you'll lost into a lot of trains and into a 8000x8000 map that you never seen. I recommend you watching my excels and this website http://www.trenscat.com/renfe/ to get an idea of that are you watching.
TIP2: Some stations have got in his name "Sense Servei" in catalan, it means "Without service". Some stations and some railines have been builded quite different from reality to allow the schedules. Remember that TTD is an unrealistic game, and this is why I like to do realistic things into unrealitisc game, it's funny

This OTTD savegame is made on a Catalonia + Aragon + Valencia heighmap about 8000x8000. I used OTTD patch with timetables for this.

All catalan railways (without subways) have been represented in this savegame with its corresponding traffic in a 24h timetable.
Remember the savegame was made in 2008 so timetables aren't updated to 2016. Traffic hasn't changed so much anyways...

There are some traffic types running across those networks:

Rodalies de Catalunya:
Commuter trains running on conventional network at 120 kph. They run from 5 am to 1 am, aprox. Those trains will be easy to find in the savegame because they are red and they are the main traffic in Barcelona surroundings network.

Long distance trains
This assorted kind of traffic include trains between France and Alicante, express trains between Barcelona and Valencia and some night trains.

To understand the savegame it's necessary to read this thread, and see the excels with the timetables. I've explained the meaning in this thread, long time ago.

I hope you enjoy the savegame and it helps you to expand your knowledge about Catalan towns and Catalan railway network.
Last edited by Artamir on 19 Feb 2016 19:58, edited 3 times in total.

Here are the most important thing of this savegame: TIMETABLES!!!

I did a 24h timetables duration:
(Timetable is aproximated) 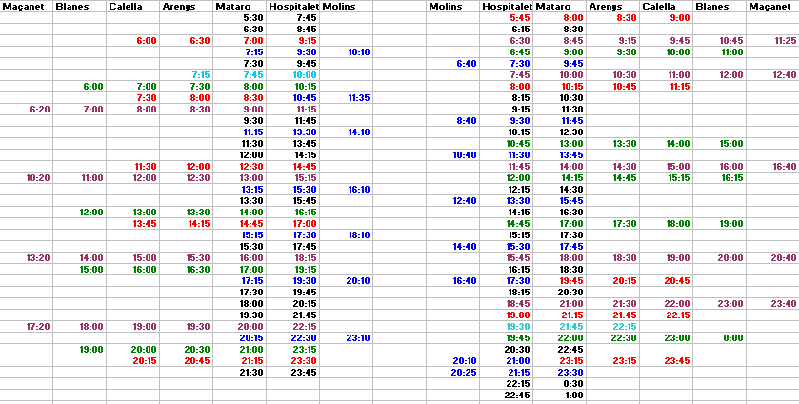 There are no trains doing passengers service until 1:00 to 5:30 hours 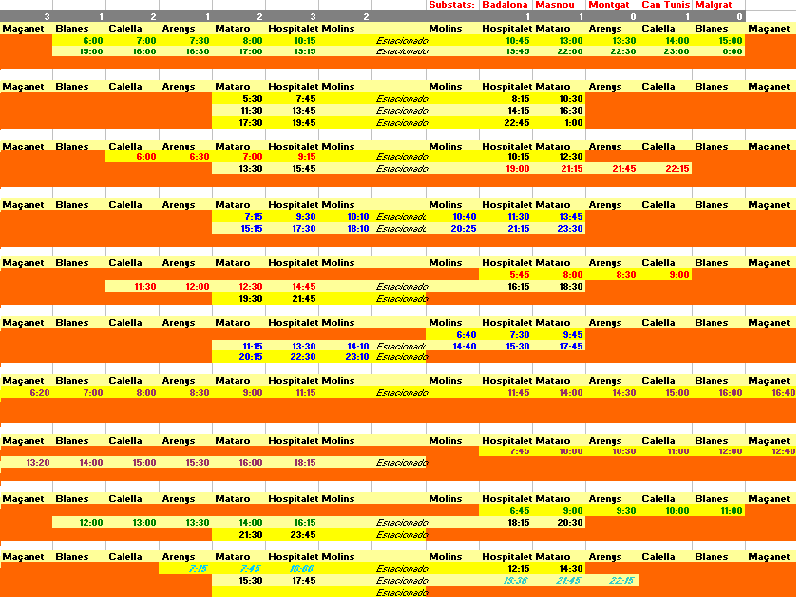 Numbers in grey means the number of trains that are "sleeping" in this station.

The problem of having a time in which service of travellers is not lent is that the trains must remain parked in the nearest station at their next service. There in order to prevent the collapse of a receiving station, routes without travellers service can be made until near substations and parking the trains until new order. Another problem is that passing frecuences have got several limitations.
For example >>> Train destination "Mataró" continues, coming back without service to "El Masnou" using one platform for parking

And my first train running in the practise

Wow, that sounds and looks impressive!

Well, I think most people prefer shots of impressive and large stations and not of complicated timetables. I prefer an impressive transport organization hehehe.
Some important stations at this moment:

Hospitalet del Llobregat: It will be the destination of a lot of "Rodalies" lines (Commuter trains) 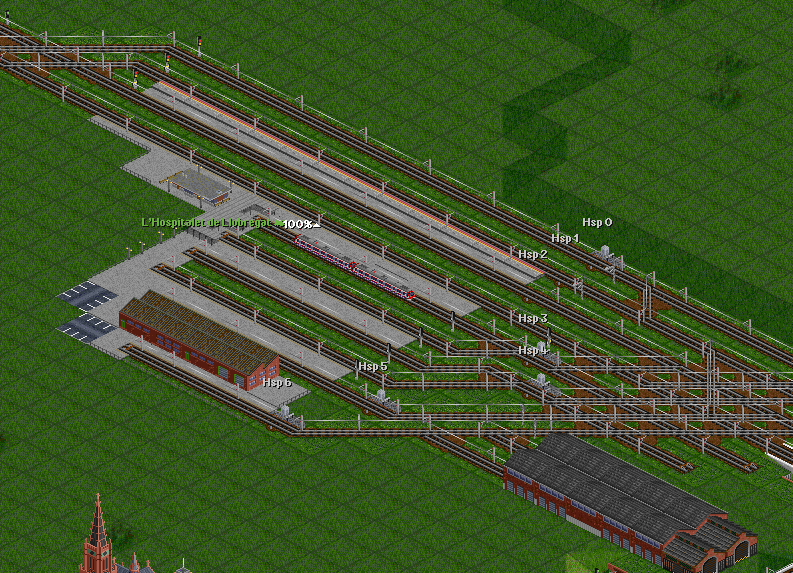 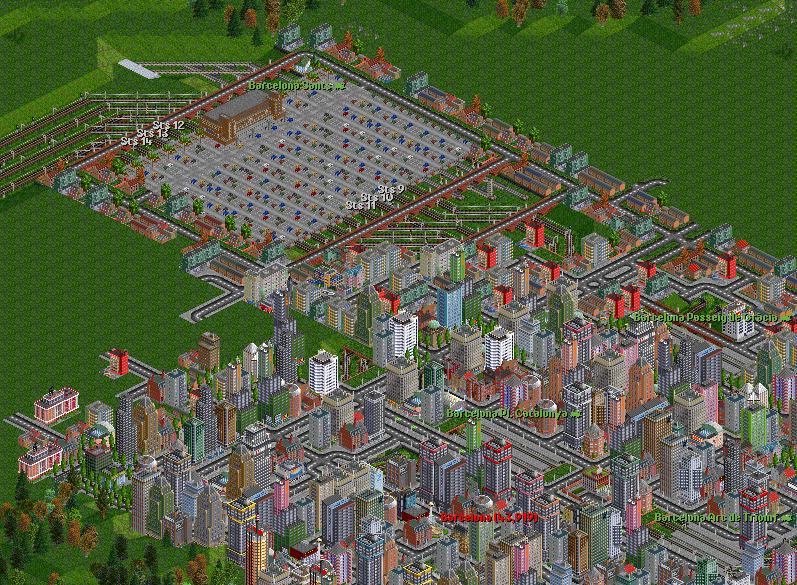 Most important Barcelona's Depots. At the right exclusive Talgo depots. 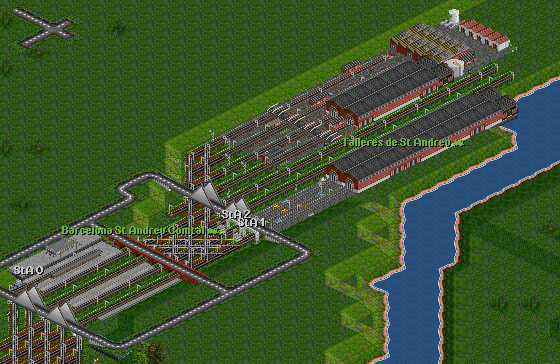 I've tried to do 24h timetables before and failed miserably - although this is looking really promising!

Unfortunately, would this mean that there's a huge backlog of passengers to move once the first train of the day starts out?

JamieLei wrote:I've tried to do 24h timetables before and failed miserably - although this is looking really promising!

Unfortunately, would this mean that there's a huge backlog of passengers to move once the first train of the day starts out?

Hahaha, unfortunately ottd doesn't know about 24h or rush hours. But I'm doing now the timetable with all stations. I'll post when I have finished

I think that this time won't fail, because I did a lot of things with timetables: Basically, I used to synchronize trains with diferent route, speed, and properties that share all or a part of a railine to avoid that faster train stops before the slower.
The only problem is that do timetables is very, very... difficult, but in my opinion the result is awesome!!!

Here are two shots from my last game: 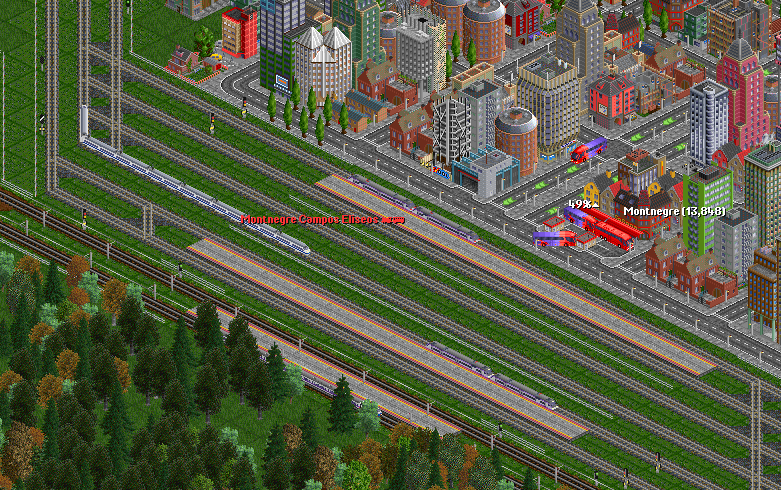 You can see in this shot that the first train AVANT (Max Speed 250km/h) runs normally for the next station and stops for a few time. At the same time, the faster train AVE (350 km/h) runs behind of AVANT ¡¡WITHOUT LOSING HIS SPEED OR STOPPING!! They are totally synchronized, allowing AVE to advance AVANT in this station. The same with my other railines, but this example comes from a high speed line where all stations allow advancements. In mainlines there are not a lot of advancements, only the faster train wait until there is a sufficient between both to not touch itself

To synchronize trains I often use a greater time that the slower train needs to complete all his orders, and putting the same route time for both:

I hope that someone can understand this >_<"

I see you timetable in ticks, this is much better in my opinion partly because it takes away the weirdness of timetabling by no. of days (you can trains loading for literally weeks otherwise) but also you can shave time off the schedule because a tick is a much smaller unit.

Ameecher wrote:I see you timetable in ticks, this is much better in my opinion partly because it takes away the weirdness of timetabling by no. of days (you can trains loading for literally weeks otherwise) but also you can shave time off the schedule because a tick is a much smaller unit.

Of course, because of this I toke ticks

I hate days. In this savegame I use virtual minutes (there are some ticks). Days is a useless unit for doing timetables.

Time between stations is the same than autofill time, but clearing seconds. (15m 45s = 16m) All the timetable is tested and runs perfectly.
*(adelantado = early)

Wow, I never thought that anyone would use timetable as such in OTTD, thank you for proving me wrong. As I expected, though, it seems to be hard work. Congratulations, then !
Top

Hypolite wrote:Wow, I never thought that anyone would use timetable as such in OTTD, thank you for proving me wrong. As I expected, though, it seems to be hard work. Congratulations, then !

Many people prefer building a lot of tracks, roads and airports. They prefer building than organizate a perfect infraestructure usage. Building for me is boring on ottd, I prefer organizate all train services and thinking about how doing a usefull railservice without traffic jams

(I hate seeing a lot of trains stopped one behind each other). It is very complicated, but slowly it will be very nice to watch

.
Timetables are a usefull thing, but not all people like them

I agree with you, I don't like building either. In fact, if there was some kind of fully build scenario where it lacks only trains and a little bit of planning, that would be great.

I'm already jumping everywhere when I come across scenario with pre-built roads, and it's nothing more enjoying than buying advanced AI and refactoring/optimizing his former tracks. Generally I don't need timetables, but I can see your point with different train speed. Instead of letting them decide when to stop, by putting signals every two tiles, which is a little silly when you think about it, you can finetune timetables to make trains running without stops between stations.

A question arise then : do you play with breakdowns ? As they can jam a normal network, I imagine they can also completely break up timetabled ones ?
Top

I play without breakdowns and I often use some cheats like money and tunnel cross (to do building easier). Mmmh, I think that use breakdowns with timetables... the problem could be on laaaarge timetables... But I think is possible to do this timetabling style with breakdowns, with some difficults of course hehe. The trick is putting more time at first and last station. In real life, trains could be hours in his final station for doing maintenance and waiting for his next orders. Is very strange that a train arrives to his last stop and comes back in few minutes. Putting more time between trains and more waiting time in final destinations for going to depots could be the solution for breakdowns.

Problems could appear in long travels.

I have other ways to allow advancements with and without timetables: dobled beacon railine (Allows trains using both tracks to the same direction if there aren't trains running in the opposite direction)

Timetables with breakdown is possible. Nothing is impossible

It looks pretty much like the tricks used in normal game to avoid breakdowns, except for the longer wait time at the stations, of course.

Nothing is impossible, indeed, but would it still remain a game ?

Ah - when I do it, I use hours and minutes

It's much easier to comprehend, even if you get some odd values such as a metro line taking 3.5 hours to go 10 stations, or stopping for 10 minutes.
Any opinions expressed are purely mine and not that of any employer, past or present.
Top

This is, frankly, superb. I didn't think it was possible to go down to such detail in OTTD.

I wonder if it would be possible to accurately simulate a real timetable. I use the UK scenario a lot, and it'd be fantastic to actually work it out so that timings are fairly accurate (eg a 2 hour journey in real life, takes 2 hours in game)...

I'd love to do it myself, but this sort of thing requires a patience and organisational skill that's probably beyond my attention span

To make an accurate timetable, you must have some sort of accurate distance between stations, given the speed of the trains used, that would require a nice piece of patience too

The problem mainly lies in waiting-at-station times really, since they're often too great in proportion to the travelling time.
Any opinions expressed are purely mine and not that of any employer, past or present.
Top

Mmmh, the problem is that in OTTD scale is not accurate... So if you want building stations like real life... There became too big. So, I think is not too important that journey time is the same in OTTD and real life

Three first trains running according to schedule at 100%

(Note: On timetable, there are only arriving times, to calculate departure time you have to add 2 minutes in all stations and 3 minutes in Barcelona's stations.) 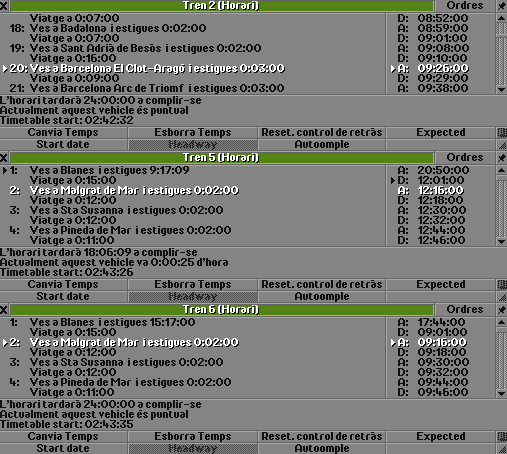