In 2015, the inevitable happened. World War III broke out, and powerful bombs were launched. These bombs were so powerful that half of the earth's crust was literally scraped off, and even the earth's orbit was altered.

However, in 1960, a group of scientists and architects from across the world had met in Geneva, Switzerland. With the Cold War set to explode at any given moment, they formed the Humanitarian Protection Project (HPP), and began work on five underground cities under the United States. These cities were designed to survive anything, with complete buildings being built underground.

When they discovered that World War III was being planned by many governments, many corners had to be cut, and no method of connecting each city with transportation was ever established. Transmitters were built in an attempt to make sure each city could communicate with one another.

After the dust had settled, the cities still stood. However, no traces of even small life remained on the surface of the earth. Fortunately, the scientists had developed genetically-altered seeds that enabled plants grow in harsher conditions than normal, allowing these cities to grow plants.

To keep order, the HPP had designated New Atlantia as the headquarters of The New World Committee (NWC), the main authority.

However, the scientists soon discovered that, due to Earth's altered orbit, it is on a collision with a comet. This comet, once it impacts earth in fifty years, will fill Earth's atmosphere with noxious gases (a situation similar to the one 64 million years ago with the dinosaurs). Almost immediately, two solutions to this problem were suggested.

The architects in La Manta Fissure and Trennion Gorge have drawn up plans for "Geo Domes" - domes that will cover each city, creating a new environment. The technology has been proven to work - many parts of the HPP cities were made using it. However, the scientists argue that these domes will take too long to construct, and that the disposal of waste generated by their fusion power plant requires too many people.

The scientists in Solaria Plain and Garcona Basin have started the Interplanetary Space Project. The ISP wants to build colonies on Mars. This requires building rockets to transport people and equipment to space, as well as developing technology for building and maintaining these colonies. The architects argue that this project hinges on too much non-existant technology, and because it would be in an experimental phase, it wouldn't be safe.

Throughout this debate, the NWC has had to remain neutral. They realize that if they take a side, the other will protest, fighting will break out, and nothing will be accomplished. However, as more citizens of New Atlantia take sides, this task becomes increasingly difficult.

This debate's main focus is on the Uranium deposits outside of La Manta Fissure, and oil fields outside of Solaria Plain. When the earth's crust was scraped off, vast mineral deposits were exposed. Oil and uranium can be used to make nukefuel, which can either be used to power rockets or fusion power plants.

The NWC knows that it needs a method of connecting the cities and moving the resources. However, due to the fact that it must remain neutral, the NWC must support both proposed solutions, and the uranium will need to be divided between the fusion power plant and the ISP. This is why the NWC has contacted you. As one of the few remaining neutral people in New Atlantia, your management skills are necessary to manage a transportation network that can satisfy both the architects in the east and the scientists in the west.

So, can you connect the cities and unite the people? Or will the New World fall divided?

EDIT: Also, if you're looking for good futuristic music to listen to while playing this (because you've listened to Everlasting Skyscraper too much), look here. It's some great synthesizer music. 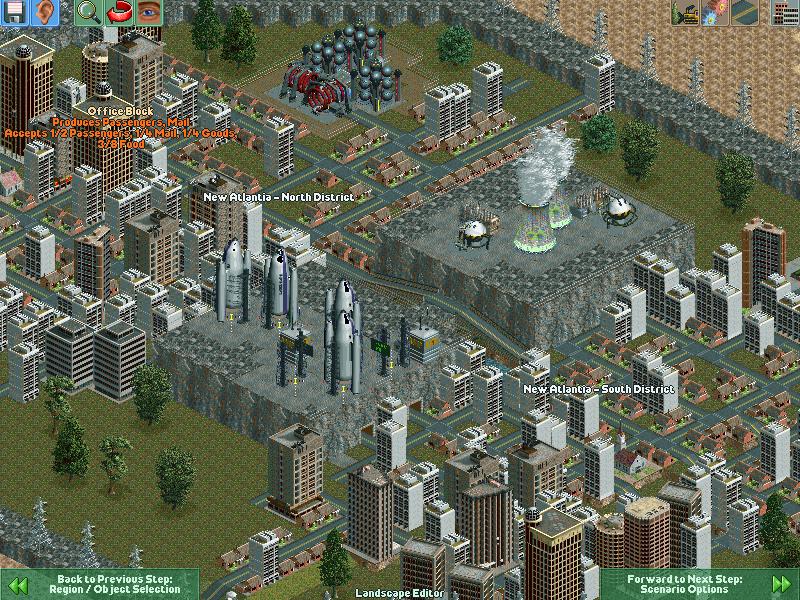 Looks great! Installing LoMo so I can try it (Got new hard drive!)

This is my signature.
Top

I don't have LoMo, but the story is great, also scenario seems to be allright, so here toy are, "I loved the story and the scenario."

Very cool. I've played it, and found it's real easy to make a profit (I first built maglev from the Oil Wells to the NukeFuel Industry.).

Dan's Railroad Gif Roundhouse: http://www.trainweb.org/rrgifroundhouse/
Thanks to him for all the cars drawn above.

ssmit132 wrote:Very cool. I've played it, and found it's real easy to make a profit (I first built maglev from the Oil Wells to the NukeFuel Industry.).

That is the question.
Nick - Creator of the virtual railroading review series: