Edit: I cant belive i actually managed to take the diff and merge it with the miniin code and then compile it all back into a working game.. got to love the dedication of the people arounde these forums.
Top

Im not sure if we are to post problems with the different patches included within the miniin in here or in their respective forums, but in Advanced Auto Replace you cant select the last wagon on the list in order to auto-change it. I cant even make the auto-change for wagons work at all, but that could just be me.

Found a bug with diagonal crossings, it seems the check for valid rails is bypassed when a train is on the tile, resulting in the road being built and the train being disconnected

Edit: new save showing the borkation...

Im not sure if we are to post problems with the different patches included within the miniin in here or in their respective forums, but in Advanced Auto Replace you cant select the last wagon on the list in order to auto-change it. I cant even make the auto-change for wagons work at all, but that could just be me.

You're allowed here to report all problems you find in the miniIN version. I only do not understand your problem with the patch. Your sure it is that patch?. You have a screenshot?
Top

Disregard my last post. I re-compiled the game from scratch and now the patch work like a charm.

i'm glad to hear that

Well, got a nice bugreport here.

The first time it occurs in the attached savegame is with r5828. There I get:

From r5829 onwards I get the following assert:

The savegame can be found here. Sorry for its size, but the bug occurs within a few seconds of starting it.

I really don't understand how, but both Expresso and Sacro's bugs seem to be caused by Wolf01's drag-and-drop land buying patch that was added in 5828.

I noticed some odd behaviour with PBS. If a train are forced to stop outside a PBS signal block due to the fact that all the paths are taken/blocked, that train will stay there and not do a track/path check until the entire block is empty of trains or in other terms.. it will stay there until all the PBS signals are green. Then and only then will it do a path request and enter through the block (even thought there are several paths for it to take through the PBS block it will not do a check for those paths until the block is totally empty)

In a high capacity PBS block this behaviour can shut down the entire main line. Lets say you have 3 one way tracks linked together through a PBS block (so your trains can switch between the 3 tracks) A train comes up to the block, but are forced to wait outside the block due to no free tracks for it to take. The train now waits and blocks one out of 3 tracks. Here is the fun part. While the other 2 tracks are still open, trains can just speed up to the PBS block on those tracks and as long as there are open tracks for them to take through the PBS block they will take those tracks. The first train is forced to wait and wait and wait, even though there are free tracks for it to take it wount do a track/path check until the PBS block is totally empty of passing trains.

Then all you need is for a 2nd train to be stoped outside the same PBS block and the result is total chaos.

For me it looks like that a train that is stoped outside a PBS block wil not do a track/path check through the block before the entire block is empty, while moving trains does this as they come up to the PBS block and thus bypass the train that stoped outside the block.

In a high traffic block the train that is forced to wait outside can stay there for a very long time.

Its weird - but yes, reverting the dragdrop does seem to stop the error. But it shouldnt matter...

Anyway an interesting screenie - most of the tiles it complains about are this tile: 34CA7D which is a station tile... or at least is some of the time!!! 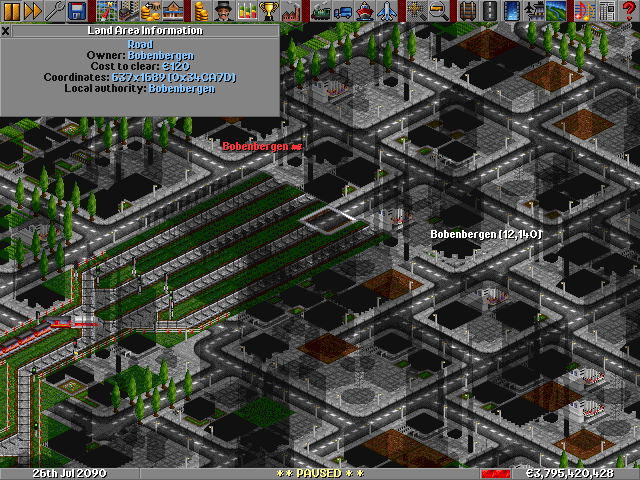 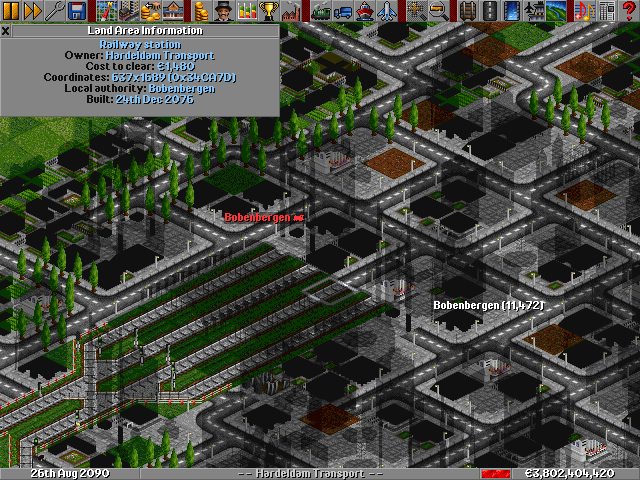 Ouch!! Nasty little problem that one.

Road placement uses the CmdPurchaseLandArea routine to buy the land before placing the road. DragDrop code had moved the check for vehicles inside its loop, allowing the land to be purchased anyway (it "continues" rather than errors).

The change, in r5838 restores the original test, and now means the DragDrop will fail totally if the first tile has a vehicle. A minor inconvenience compared to an assert!

Sure, the DragDrop code had been naughty - but who would guess that when the game builds a road it buys the land using CmdPurchaseLandArea first!
OTTD NewGRF_ports. Add an airport design via newgrf.Superceded by Yexo's NewGrf Airports 2
Want to organise your trains? Try Routemarkers.
--- ==== --- === --- === ---
Firework Photography
Top

, because i coded it. It's part of the advanced town handling price system.

We really need to add a wiki page for every patch in the miniIN (imo), that tells the user how to use certain things and what are the features of that patch. Maybe a secton for telling other devs what has changed is good a good idea, too
Top

Maybe if you use a routine in an unconventional way like that, you could add a comment in the header of the affected function.

I noticed some odd behaviour with PBS.

Well, the current version of PBS is unsupported (its just been made to work with the MiniIN for those that cant live without), with plans for it to be totally rewritten once the YAPF pathfinder is complete.

But you're right that something has changed.

PBS signals appear to be broken, as you said; the trains in my example are restricted to 41km/h after being stopped at a PBS block as well (using r5722).

At a guess, Im going to say something in the trunk changed, and caused PBS to have fits since its not considered at all when changes are made.

2 notes on your post; include a revision number and a picture is worth a thousand words

sc79 wrote:2 notes on your post; include a revision number and a picture is worth a thousand words

I was pounding on how to take a screenshot that showed what i was talking about, in the end i just gave up the entire screenshot thingy

I figured out where PBS really shines though and thats with RR station exits. Since the trains get a "check" when they are done loading/unloading and they then move 1/2 cm thowards the exit signal gate - PBS kicks in and does a proper path check out of the station. Makes for one really efficient station exit - however as we both knows it cant really be used for entrances or even in normal x-ings, but stations exits it really rules.

Cant wait for the new YAPF to kick in.

1. Intercontinental airport is nice but shoud be smaller. I think 2 squares in wide.
2. Load commands work fine, but when i sell vehicle and buy new one, new commands are not coppied.
3. New type of small airport is bugy - all aircraft crash like on normall small airport.
Top

Yes, that commuter airport isn't really adequate for the big aircraft - although I'm sure DC-9, BAe146 and Fokker100 will run just nicely on it, but that's about it.

Guess why the Commuter airport is listed under "Small airports" in the gui?? Cos its a small airport, with all the small airport restrictions. If you try to land a 747 there, there is a good chance it will crash.
OTTD NewGRF_ports. Add an airport design via newgrf.Superceded by Yexo's NewGrf Airports 2
Want to organise your trains? Try Routemarkers.
--- ==== --- === --- === ---
Firework Photography
Top

Pitty the slim long airport - what is it again - didn't make it in the miniIN/nightly - how come?

-- Perhaps we could use some kind of path-finder for movement of planes on airport tiles and have the option to construct a custom airport out of differemt parts...but that's a whole another topic.

Well, it doesnt actually affect track building, just the cost of buying the land. You're right that it can get really extreme though. I usually have it turned off early in the game (especially if im using expensive train sets, hard difficulty settings or, god forbid, only passangers/mail), otherwise im actually forced to abandon construction around towns once they reach 2-3 thousand population. Then turn it back on once the profit starts to come in. If you do a lot of construction around towns, it actually works pretty well to keep the runaway profit in check (and trying to bulldoze a path through a 50k+ town even late in the game becomes nasty).

Pitty the slim long airport - what is it again - didn't make it in the miniIN/nightly - how come?

I believe it wasnt accepted into the nightlies because it had a few issues, and Rich dropped it from the MiniIN patch to keep them both in sync.
Top
Post Reply
610 posts