All along, plans were around to extend the Säffle mainline to a town called Billdal (no picture shown, see routemap). There was only one real option for which route to go - via the tiny Ljunginge. Despite a population of below 1000, Ljunginge soon became the seaside hub of Hawthorn & Co. Buses from Åkersberga, boats from Katrineholm, mainline running right through. 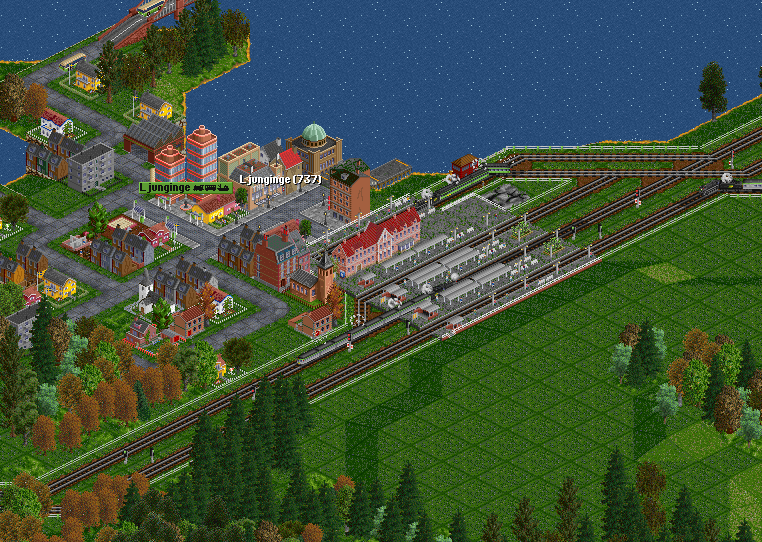 And this extended mainline to Billdal could not also terminate in Landskrona, like the Malmö mainline does. Therefore, nearby Stockvik underwent a massive re-design to be able to handle the load. At times, this layout is not sufficient. This picture shows an average load for Stockvik, but there are 7 trains in the picture nonetheless. It turned out rather pretty, I have to say. To the north, trains run to Malmö and Billdal. To the southwest, they head to Landskrona. The eastern route is the original mainline from Ljungby and Höllviken to Stockvik itself.

A routemap for 1949. I could not get a better-looking view, so apologies for a large screenshot. Request if you wish!!

It is quite funky. The train for Stocktuna is a separate line running from Trelleborg to Bålsta. Through Härnösand, that 3platform station is part of the mainline down to Sala. At Härnösand, the middle platform can be used in both directions, while the two outer platforms are one-way stations only. Wide picture alert:

Will the future pictures use Swedish Houses 1.0, or do they already?
Top

I recently added the 1.0 version of Swedish Houses, but I've only been playing with it for 2-3 in-game months. That is, after these pictures were made. Future pictures will be using the 1.0 Swedish Houses

Would you like to upload any savegames of your favourite openttd save game...
hehe
Check out some of my work
Top

No, I wouldn't at the time. I'll be creating a SaveGames topic soon, perhaps. I want to finish this myself before I let others go for it

They will be save games from these screenshot thread, correct?
Top

yay! but i just have to say, I really like the screenies (have i said that before?)
Check out some of my work
Top

petert, I might release two savegames from this game - one from the earliest save and one from the last save. As said, though, only once I have finished myself

http://www.tt-forums.net/viewtopic.php?p=837484#p837484 Posted these under the Random Screenshots thread instead. Same game as the 100-year progress of Barnwell, picture shown a few pages back. Same style as well, same town with about 100 years in between

It is quite funky. The train for Stocktuna is a separate line running from Trelleborg to Bålsta. Through Härnösand, that 3platform station is part of the mainline down to Sala. At Härnösand, the middle platform can be used in both directions, while the two outer platforms are one-way stations only. Wide picture alert:

Wow! I love how the railway line goes right under the centre of town - this is something I always try to do, but always end up removing the town and replacing it with a bridge, so I can have all my points and signals in there

. Looks really impressive though, all the high-rises!
Posted by Raichase. Visit my Flickr! Gallery, Blog (get a feed of everyone at once at Planet TT-Forums).
Raichase - Perfect timing, all the time: [13:37] * Now talking in #tycoon

Why thank you Raichase! I've not been playing this game much lately, I'm sort of running out of "fun" areas to expand into. I've made a massive redevelopment of Sala (see routemap) and extended the network westbound. I'll bring screenshots of those areas sooner or later. When I get around to it

A new set of pictures from the current game, for your eyes only. Let me start by announcing the addition of a few NewGRFs! I have updated to the Swedish Houses 1.0, but I also added two other house sets; Suburban Renewal Houses 0.11 and the UK Town set. In addition to those, I've added two NewGRFs for the trams in Höllviken - New Tram Tracks v0.4.1 and the Dutch Tram RC1 (r26). If you view this routemap from earlier, the only addition is a southwestbound expansion from Sala to Billdal. Pictures of both those towns to come.

I will start, however, with a huge map. I've made it .jpeg to decrease the file size (the .png ended up being about 5.5 MB), so apologies in advance on a non-perfect image quality. The picture shows Höllviken and Gustavsberg in 1956. The town of Höllviken has undergone a massive infrastructure redesign, with tram tracks in the middle of large avenues. A motorway has also been constructed between Höllviken and the town of Västerfors, passing by the new International Airport outside Höllviken. Airplanes fly from Höllviken to Gävle, Ljungby and Sala. The Höllviken Airfield will remain in use for flights to Umeå. Large picture alert:

The town of Nässjö was by-passed when the mainline was built in the late 19th century. Since quite a while back, however, it sees regular bus services (buses were recently upgraded to lighting quick Brill IC-41s) to Bålsta and regular commuter trains to Hallstahammar. The junction does look odd, I agree, but it does the trick very well. It looks pretty, I must say: 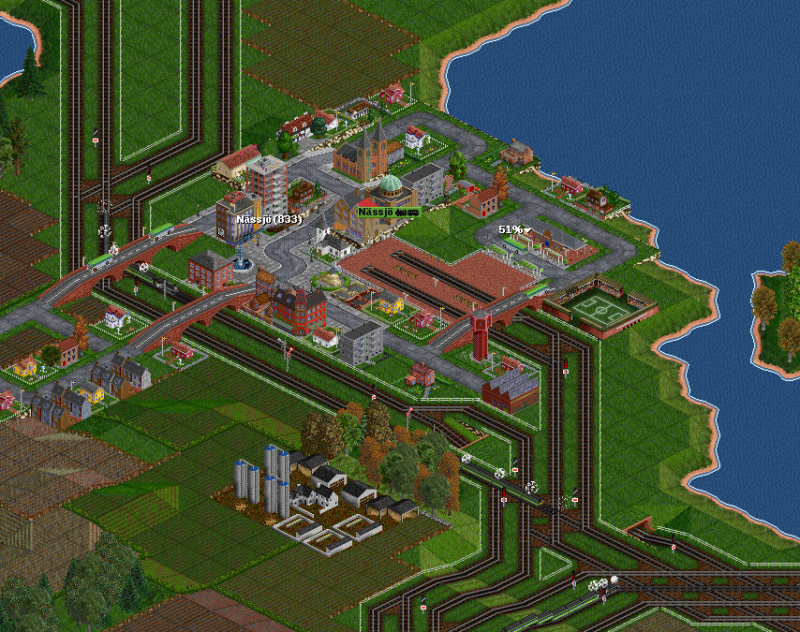 The town of Sala, where expansion certainly has taken place. The airfield east of the town sees regular service with old Fokker F.VIIs, relocated here when the new airport in Höllviken opened. The station itself most often serves as a place for passengers to change trains since very few trains actually pass through Sala. They terminate here: 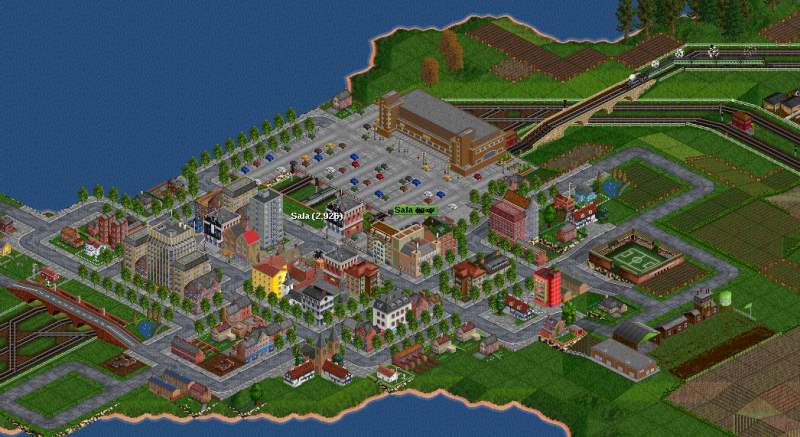 The next station after Sala is Mjölby (to the bottom left of the old routemap). It's a large station for a small town, mainly because three mainlines meet here. Tracks to the right lead to Sala, the tracks from above leads to Billdal (see routemap) and the tracks westbound eventually ends up a in town far to the southwest called Kungsbacka (not present on routemap). The layout is quite simple, two separate bays using waypoints to send them the right direction. This area sees no steam trains anymore either. It's all operated by the new fancy diesel trains. 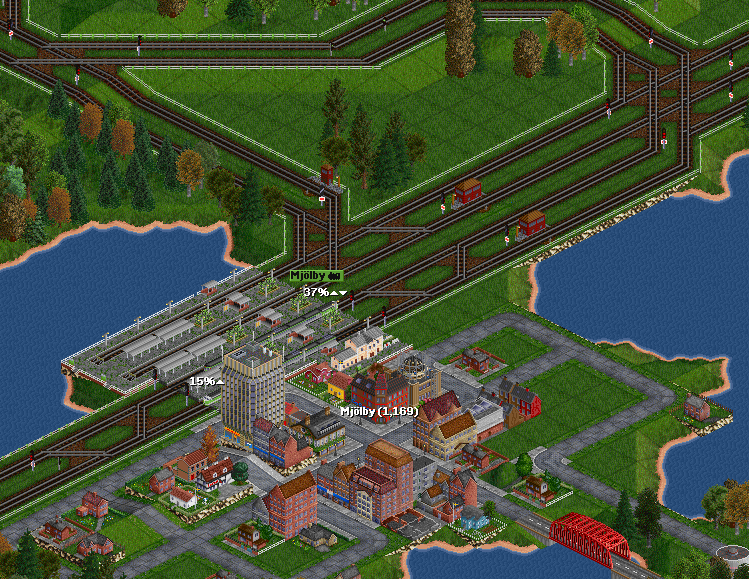 North of Mjölby, we find the aforementioned town of Billdal. Local trains run to Åmål and Bollnäs, and commuter DMUs swing south down to Mjölby. Nothing much to add. It's all quite standard, the layout. Some of the last steamers built run the Billdal mainline (one present in picture). 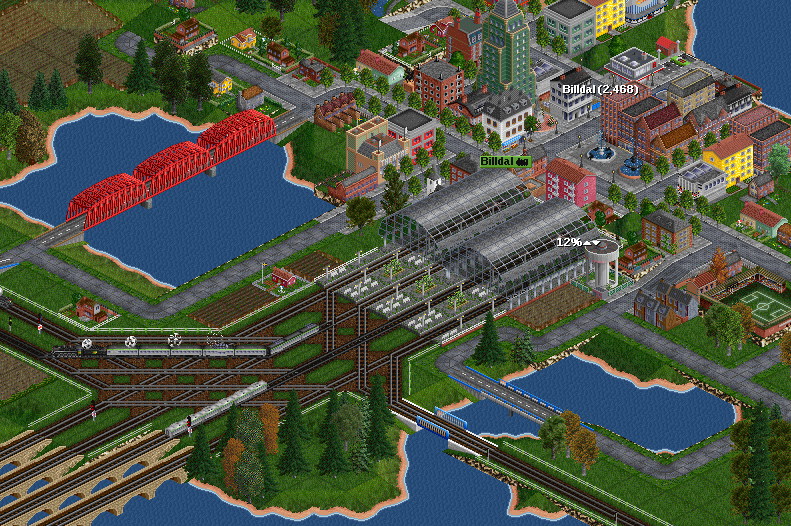 To round it all off, a picture of a rebuilt Ljungby (old layout here). A new airport has been built to transport passengers from the ever-increasing metropolis Höllviken. Surprisingly, this station layout functions very well, albeit not being very realistic. You can always have two trains entering the station at the same time as two trains leave. There's an unusually low amount of trains in this picture: 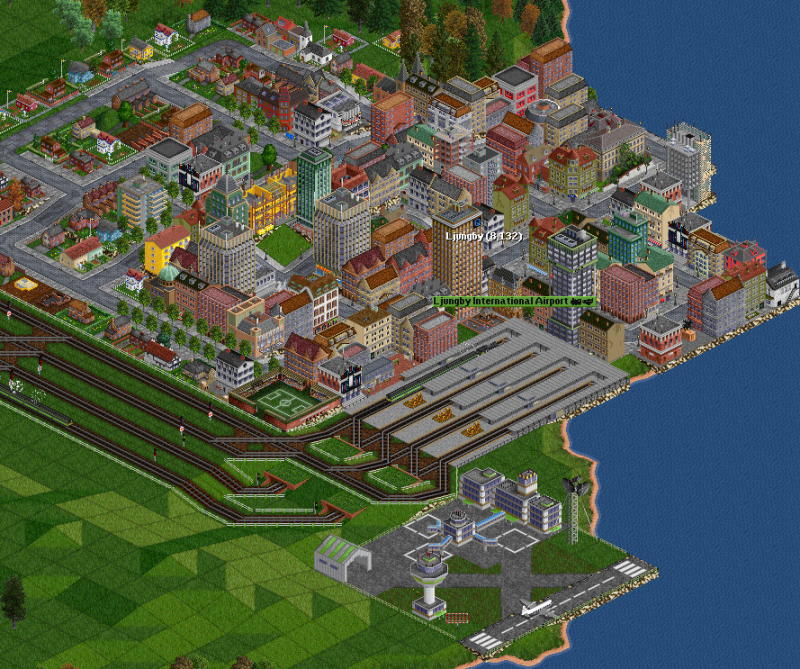 As always, requests (perhaps more of them large screenshots) are welcome!

Nice thread Chrill!! Do u use the scenario linked in your signature?
Top

No, that's a very old map which would need quite some editing to be playable at it's best. I plan to take care of that and release a new one sooner or later though. This map is randomly generate by the in-game map generator

I love the station at Nassjo with the building on the other side of the bus stops, it looks good

That is good, may have to borrow that idea!
|||| My OTTD/TTDP pics ||||Currently slighty obsessed with getting Platinum Trophies||||Retired moderator||||
Top
Post Reply
278 posts