Company Value GS is a Game Script that uses the goal list to rank companies by their current company value. It can also be used to challenge companies not only to be the first to reach a user defined company value target as a goal, but also to do it as fast as they can.

- Reach target company value below:
In this mode, Company Value GS uses the goal list window to also rank companies by their current value. The target value, which is set on the next setting, is used to determine the progress of every company in relation to it. Each company is given the same challenge, to become the first to reach the target value. Once reached, Company Value GS pauses the game and informs every company of the winner and the time it took to reach it since its inauguration, while asking if they want to continue playing. The moment any company continues playing, the game is unpaused and Company Value GS switches Goal mode to ranking mode.

Amount of debug messages to log:
- Essential:
Logs only the minimum necessary, when Company Value GS is reaching key points, such as pausing the game, reaching the goal, switching game mode.

- Too many:
Logs more details for loading, saving, starting and initializing. Also logs creation and removal of company goal details during Goal mode.

- Insane:
Logs every internal variable changes and every goal computations in near real time.

v3
- Added a feature to Goal mode: displays how many days the winner company needed to reach the target company value since the day of its inauguration.
- In the unlikely event that multiple companies reach the target value simultaneously, then the one with the highest value wins. If their values are identical, then the newest wins.
- Changed the amount of debug messages to be displayed on the various preset levels, and shifted all the near real time logs to Insane preset.

v2
- Fixed a bug that was causing the ranking order to be displayed in na unordered manner, when switching from Goal mode to Ranking mode.
- Unpausing the game is done immediately now, and not after company goal clean up, which improves responsiveness.

I took this GS to do some sort of competition between AIs. Each game started in 1960 and 3 Random AIs would try to be the first to reach a Company Value of €25.000 k.
Once that happens, I take note of the winner and how long it took to reach the goal. Then I start new games every time I get the winner of each game, until I get a sizeable sample and display it in a scoreboard of sorts as below.

Here's a screenshot of my last match. 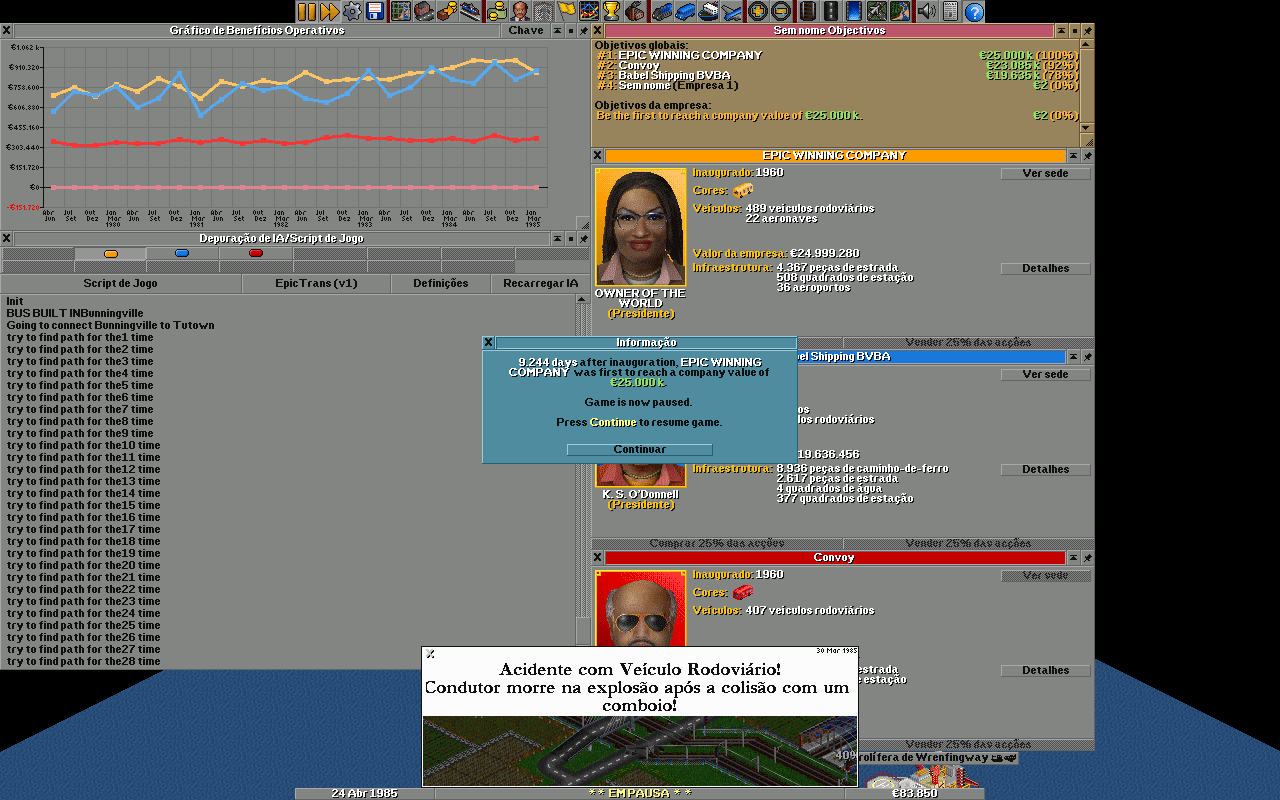 I attach the savegame of it and the config file used for all these matches.