Woah there, signals in tunnel entrances?

Perhaps I need to be keeping an eye on OTTD updates?

I think it's some king of patch, at least the previous game was made with Chhill's patchpack 8...

JGR: nice screens, but can I ask for how many game years do You need to build this?

And I especially like that someone is using my set

If you want, You can get company coloured buses automatically by setting the first parameter to 1.
Edit: could we get a legend to the network map?

As for game years, the map is twice as large as the last one, and I fiddled the game year to something 2010ish at the beginning. Under 50 years is nothing really, spent 20 times that on my TTDP game, that said I do use build whilst paused liberally.

I didn't realise that the Ikarus set was yours, Colossal. 'Tis a nice set ^^
As for colours, honestly I've left just about every colour setting on default.

The network map legend is the same as the previous one, broadly speaking. Though the map itself needs more work. I'll likely add a legend to it when it's near completion.
Ex TTDPatch Coder, Grumpy Greymuzzle
Avatar by MoonsongWolf.
Patch Pack, Github
Dad-Coder since April 2018
Top

Screen 5:
A quiet town on line R11, with a dock and a bus service to the neighbouring towns...

Screen 6:
One of the more busy stations on the network, this (recently redone) station serves lines: R7, R9, R13 and E4 which pass through, and lines R2 and R6 which terminate there.

Screen 7:
This rather minor town is the terminus for the local line up the north-east coast of the map, L9, which uses DMUs.
The mainline runs the standard 2200 EMU stock, lines R1, and E1 (which does not call at the station).

Screen 8:
Slunningpool is one of the busiest stations around, and is in many ways the centre of the whole network.
It's served by 84 trains on 6 routes.
The section westward to Fretfield is the only 4-tracked line on the entire map, and the junction particularly on that west side has been revised several times.

Screen 9:
This is one of the towns on that line. Express routes E1 and E3 bypass the town, whereas route R3 stops at all stations. Line R15 runs past at right angles.

Screen 10:
Fretfield is a major terminal and transfer point. About 77 trains call there, on 5 routes.

It's been a little while since I last posted, so here's a few more.

Screen 11:
A wee little village sits on a coastal road and bus-route.

Screen 12:
Foxton Moor sits on a minor junction. Routes R1 and L8 pass through, route L7 terminates there and route E1 runs through without stopping.

Screen 13:
Here's Slonningstone and some of the surrounding towns. Routes R21A, R13 and E3 are in the picture.
Sloningstone is a somewhat interesting being situated on a slope with lines on two levels.

Screen 14:
A new branch of route R9 from Trunfingfield northwards was built, as the original line beyond Trunfingfield was under-capacity. The new branch heads to the town of Windborough, which has been growing significantly in recent years.
Another two platforms were added on to the rather plain station there.

Screen 15:
Originally a cross-over station, two new platforms and connecting track have been added at Gonham too, such that trains to/from the north-west can pass onto the south-west line. Route L6B uses this new curve, to meet increasing demand along those lines. 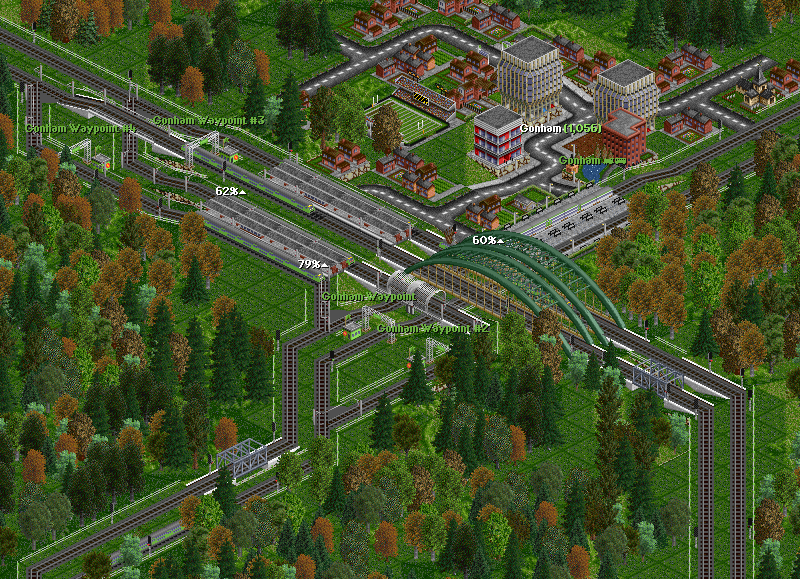 That network map is amazing. It looks so spiffy and professional, and there's so much detail!

The Routemap looks really professional! How much time did you spend on creating it?
Top

Thanks. I kept updating it as I added modified things in-game, so I'm not sure how much time it took in total, quite a lot though probably ^^.
Ex TTDPatch Coder, Grumpy Greymuzzle
Avatar by MoonsongWolf.
Patch Pack, Github
Dad-Coder since April 2018
Top

Screen 16:
The station at Ponnville, is particularly busy, as it sits across the widest trunk route on the map, now used by 5 lines.
A new track branch was built, heading northwards out of the shot, to Slunningpool Central, to connect to the branch line from there to Cardham (R13B).
That branch line was discontinued, and a new line, R22, was set up starting at Fretfield to the south-west, running along the new track and following part of the route of the old branch to Windham Junction in the distant north-east.
The idea was to connect the main trunk to Cardham without running any more trains through Slunningpool main station, just to the east of the shot, which is already overloaded, being the busiest rail station on the map, with a train arriving about every 1.5 days.

Screen 17:
Buses can be rather inadequate when it comes to moving lots of passengers around large cities, especially when there's more than one major rail station.
To solve this a circumferential metro, L14, was built, connecting both rail stations and easing pressure on the (very overloaded) local buses.

Screen 18:
This is on the other side of Slunningpool. The bus route running through Duntburg has been unable to meet demand since the day it was built, even when parts of it are excessively congested. A new line, R23, also deliberately avoiding Slunningpool, was built to shadow the bus route from Cardham in the north-west down to Hartfield in the south-east, before diverting southwards to Sedingworth Falls, another significant junction.
This line also conveniently solves the issues of overloaded local buses in Sedingworth Falls too, as it stops in two points in the town. 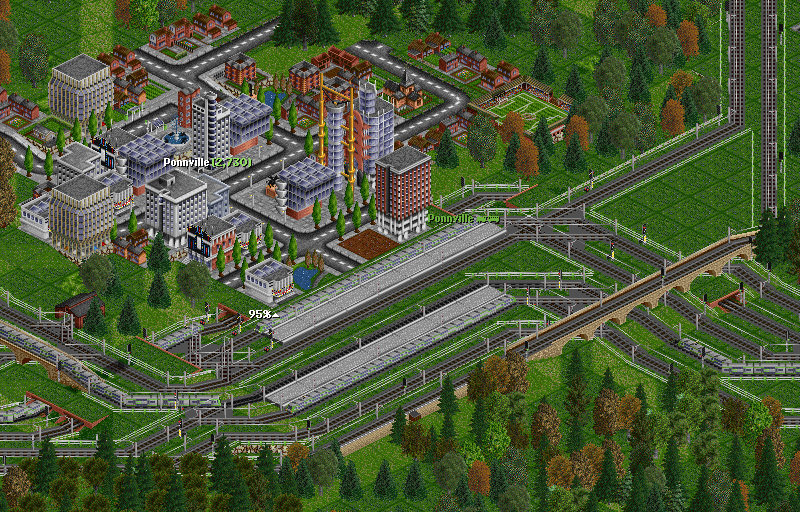 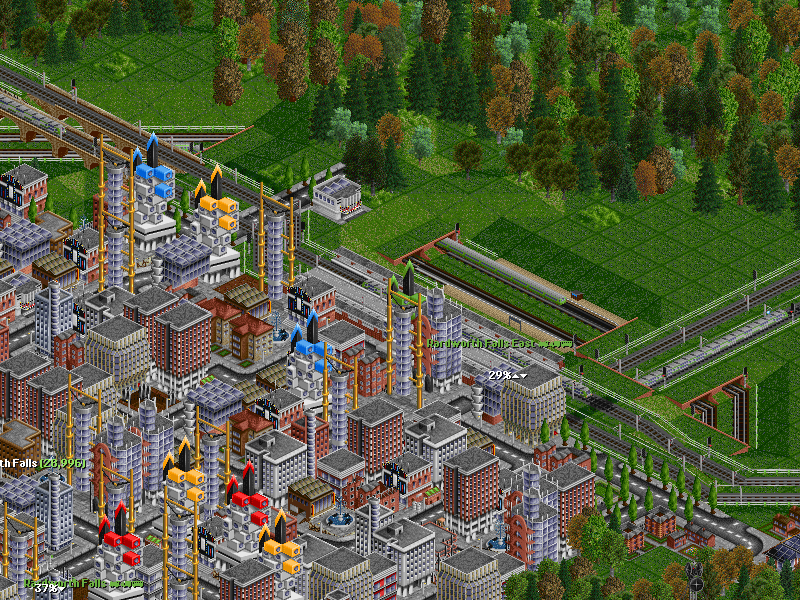 Those are quite high capacity trains you got there

Purno wrote:Those are quite high capacity trains you got there

Most of the trains I'm using have a capacity of 999 passengers, 415 bags of mail. Some have more, some less. Most of the trunk routes are still overloaded though.
The 2200 is the best train in the set (2.00 beta 3) for medium-speed rail, to the point of being a bit unbalanced, which is why they've more or less taken over

Screen 19:
This is the second-busiest rail station on the network, with a train arriving about every 2 days. It is also the station with the most trains with orders to stop there, by quite a large margin, at 111.

Screen 20:
This town is a major passenger port, for ships eastbound across the bay. There is a rail route around the bay, with a change, but that would quickly saturate without shipping support.

Network Map:
Updated quite a few things.
In particular: Added L14 and R23, axed R13B and replaced with R22 which runs along part of the old route, re-routed and extended E6, branched and extended R14.

On the Scr 19... Is that a train shadow in the tunnel? It seems so (didnt know that this was possible), but first I thought it was that "cigar shape" UFO what's not fitting into the screen due hight

Yep, (clickable) train shadow in tunnel and it works with roadvehicles also.
Patch by SmatZ and can be found here: http://dev.openttdcoop.org/projects/cli ... repository

Playing with my patchpack? Ask questions on usage and report bugs in the correct thread first, please.
All included patches have been modified and are no longer 100% original.
Top

I wouldn't want a ride on that railway line... 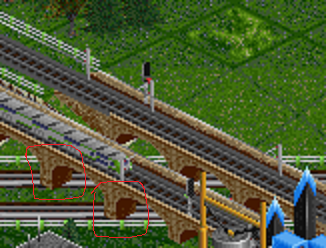 I wouldn't want a ride on that railway line...

Screen 21:
The rather mediocre bus service was not enough to meet the demands of this growing town, so the diesel line L11 was extended through, and then all the way to Fruntborough.

Screen 22:
I got a bit fed up of the default aircraft. Dinger 200s only vaguely resemble flying machines and they're far too cheap to buy/run. The AV8 set looks nicer and is much more realistically priced (read: expensive), so I decided to give that a spin instead. On the upside airbus A380s have a higher capacity too.
I also largely redesigned the NW-SE section of the station, going from 3 platforms to 5, building switch-over tracks at both ends, and adding some bypass lines for express trains (E6). The station had become a bit of a bottle-neck, which wasn't helped by my extending line R21B to terminate there.

Screen 23:
This is the largest city. Moving passengers effectively between the 3 stations using only buses/trams was becoming impossible, so (with the help of the bulldozer) some short-range rail lines (L15, L16) were built instead, one of which also runs through Sedingworth Falls, to deal with congestion there and between the two towns. I again used Cunning Disguises™, however horrendous clipping errors prevented me from completely hiding one of the lines. 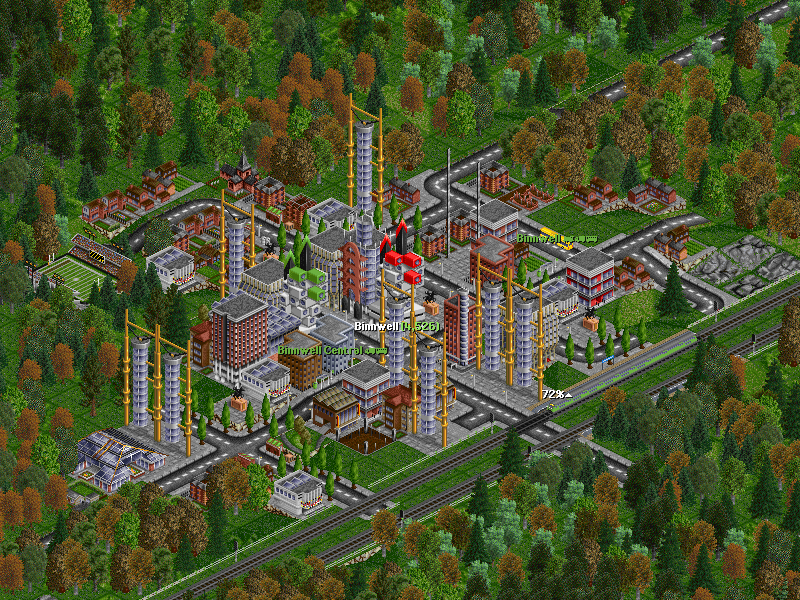 Screen 24:
A rather similar story at these two towns too. Hudingville is a fairly significant interchange point, and having every line use a separate station with a spotty bus service didn't work very well.
Grindhattan Ridge is interesting though, as it wasn't that long ago that I founded it. It's managed to grow rather alarmingly in the meantime, and the train line bisecting it became rather overloaded.
The new local line, L17, neatly solves both of those, at least for the time being.

Screen 25:
This is the station just to the south-east of Branington Airport in Screen 22. The line coming in from the south used to stop at the platforms on the edge of town, which, through the miracle of distant-join, were part of the same station

. This was fixed however when those platforms were assigned to a different station and the tracks extended such that they ran through the main station and merged with the mainline. The line (R21B) was then extended to terminate at Branington Airport.