Screenshots of your games! All Transport Tycoon games acceptable (including TTDPatch and OpenTTD).
Post Reply
107 posts

Ahh, I thought you just meant with other cargo routes.

--UPDATE--
The year is 1989. As the latest stretch of track is completed and the line opened - Dacca to Ho-Chi-Minh City, GlobalTrans HQ in London explodes in cheers. After almost forty years of hard work, the founding dream of GlobalTrans is completed. The entire world is bound up in rail, from the west coast of North America, to the east coast of Asia. To mark the occasion, a new department is opened up within GlobalTrans's Rail Division; InterRail.

In stations across the world, from New York to New Delhi; London to Los Angeles, decrepit old signs are being taken down and replaced with glittering new ones, each one signifying the elevated status of the station.

The InterRail network is coloured black (the North American line running Los Angeles to Boston, which is not signified here, is also part of the network).

The Transportation Revolution was the dream of one man; J.D. Carpenter. He worked non-stop his entire life to achieve that dream, and he never stopped enjoying himself as he drove towards it. But, by the age of 84 years old, it had all become too much for his body. Sheer determination had kept him going for the last few years, but now that he had completed his life goal he was ready to leave this world and move on.

His eldest son and the heir of his empire, Ben J. Carpenter, in his first act as owner of GlobalTrans, granted his father his final wish. His body was to be taken in specially commandeered trains from Los Angeles, in the extreme west, to Ho-Chi-Minh City, in the extreme east, before taken to his final resting place in London, next to the headquarters of GlobalTrans. We are going to follow Mr. Carpenter on his final journey.

How do I get embedding to work?

Ohh... before I only put the end of the URL into the tags.
Top

I had a quick question - is there any way to make a train use a particular platform without waypoints? Or, if there are platforms with track afterwards and platforms which terminate, will the train go to the right one?

Also how was the video? Is it worth putting the next leg up?
Top

Wasila wrote:I had a quick question - is there any way to make a train use a particular platform without waypoints?

No, it isn't possibile.


Or, if there are platforms with track afterwards and platforms which terminate, will the train go to the right one?

If you're lucky, yes

! But you cannot be always lucky, so you must use waypoints.
Top

Wasila wrote:I had a quick question - is there any way to make a train use a particular platform without waypoints?

No, it isn't possible.

We are talking about OTTD, right? Probably if i look the pictures

As the richly decorated coffin of the founder of GlobalTrans is flown across the Atlantic, his successor is giving the InterRail network a onceover - it won't do to have the funeral train stuck in traffic. As a result, the entire Istanbul-Tehran line is upgraded. The messy bits of unused track lying around are gone at Istanbul, replaced with a streamlined and planned station. Every interim station, from Tel Aviv to Basra, is doubled to 4 platforms - no longer is the Baghdad-Basra stretch full with stationary trains. Tehran is also given a couple of extra platforms.

Well, it's been a while. With Civ V still not working, and nothing else to do, I have returned to OTTD

Trans-Atlantic Landbridge - Sticking it to Realism since 1997. 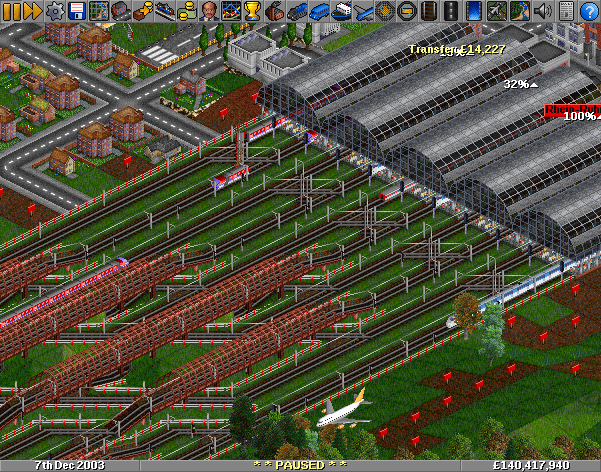 An ailing Rhein-Ruhr has been rejuvenated, with its mess of track being replaced by a pre-planned system.
Top

A couple of screenies from a random game I just found:

OK... another go... I'm playing with the England and Wales Scenario, using UKRS2 and NuTracks, among others.

With a loan of £500,000 provided by the British government, British Rail set up in 1930 to create a national integrated transportation network, while competing with companies also supported by government funding. After an extensive consultation period, it set up its first line; Luton-Stevenage. A mere months later, a branch was added to Hitchin.

Soon Luton has become a major hub, with three stations connecting to destinations such as Bedford, Oxford and Slough.

Here one can see two express trains running on the Luton-Oxford line.

Finally, and most importantly of all, London is connected. Paddington offers trains to Salisbury, Reading and Luton....

...while London Waterloo runs to the south coast, where one can enjoy the refreshing sea air of Portsmouth and Southampton. The two London termini are connected by the Orbital Railway, which can just be seen at the bottom of the above picture.

I know that people probably don't look much in here anymore

, but I'm trying to improve my design, not just building two track lines straight away. Feedback would be appreciated!
Top

I think people actually look your screenies but they dont give feedback. I like those British screenies and i think those arent just normal two track lines in the newest shots.

Looking good so far can't wait for more. I've started my own british game so if u don't mind may get a few pointers from you

Your words are much appreciated. I've discovered a certain enthusiasm for this map, and have decided to press on with my posts for now.

There's a war on! The year is 1941, and after a bumper turnover of a million pounds registered in '39, profits have remained stagnant. Nevertheless, the network continues to grow - apparently people still need to travel during conflict. Thanks to the new black liveries, designed to be invisible from the air, there has not been a single bomb strike on British Rail land. On the other hand, dozens have died from collisions between buses and trains, thanks to the growing competition for commuters around London.

Six termini are planned for London, and so far four have been built. Seen below is the newest, London Liverpool Street:

In the SE of the map is the latest branch of the Orbital Railway. The line on the east runs along the Thames down to Southend, but the line to the north is the most important of them all. The original line ran to Chelmsford, but since then an ambitious new branch has opened, despite the midst of war. The London to Ipswich line, or Great Eastern Main Line, is the longest yet, and its aptly named 'Streak' stock can boast speeds of over 100 mph.

An empty Streak on its maiden voyage, waiting for a Chelmsford train to pass.

An expanded London Victoria, in all its pixellated glory. The first two trains, running from the top, are from the Sittingbourne stopping service. The third is an Orbital train.

I have been doing some research for this map, and some of the major lines will be based on reality. I shall, however, be using artistic licence wherever I find it suitable

Plans drawn up, and abandoned, in 1939 have been put into action now that war is over. An ambitious new line, further and faster than any before it, stretching from London all the way to Birmingham New Street - the so-called 'West Coast Main Line'. An extra £100,000 were borrowed by the Company (Infra Maintenance + UKRS + NuTracks = money issues after 18 years of play!), and construction began. The line finally opened in 1948, with 4 trains operating at over 100mph.

A newly busy and expanded London Liverpool Street, with a shiny new branch to London King's Cross, home of the East Coast Main Line to Cambridge.

Meanwhile, profits at the Company slump. The source? Most likely this little hold-up on the LDN Victoria - Sittingbourne/Ashford line. The train on the left has two other behind it. Also, yet more are killed on the shamefully dangerous roads to Hornchurch. You'd be better off going by train anyway.
Top

Expansion's on hold after this happened ^. Just thought I'd point out how difficult this set-up makes it to make money. The only thing I could afford was a tramway within London to try and get more of my journeys completed (turning the link graph offs sends my profits sky-high). I'm considering turning off infra maintenance.

EDIT: Returning the link graph settings back to what I had set them at, with a low effect of distance of demand, initially seemed to solve the problem, but profits have gone down again since. The trouble has already claimed on AI, 'Something Awesome', or TerronAI, which went bankrupt after about a year of the difficulty. Syntrans has survived so far, but after NoCAB got into air travel it hasn't had to worry a bit.

After the postwar slump, British Rail ordered a stop to all expansion plans so that it could place its resources in improving the efficiency of the existing network. While, over a decade of investment later, it is in many places just as overloaded as before, profit reports cautiously hint at a recovery, partly thanks to a soaring income from the much expanded road department. One new line has opened to represent the new optimism, running from Birmingham to Nottingham.

This is the network as it stands; not much different from a decade ago, but with more ways for those in the South East to avoid going through London. For now, Manchester Piccadilly underlives its potential as the company focuses on expansion around Birmingham.

Birmingham New Street. The train in Solihull is on a stopping route to London, while the identical one loading in Birmingham is an express. The diesel(!) train between the two is on the new route to Nottingham, while the black steam train is headed for Gloucester.

I was busy building a new line when a jam here was brought to my attention... my stopgap solution seems to have failed. This is that ancient Luton-Oxford line, but as you can see all the trains are now diesel; one of the few lines to have converted. I tried switching on real life liveries for this one. The long trains are express.
Top
Post Reply
107 posts