In my personal opinion... they look awesome!
Looking forward to seeing them released so I can play around with them!
Fairy's Finescale UK Set
Fantasy Industry Set concept
Top

Very nice with a bit more varied colouration like that.
Top

Erato wrote: ↑21 Jun 2020 00:47 The shop sprites will be cargo aware, and will display boxes in front of them if you deliver goods and food to them.

I appreciate clever coding like this. House sets can be much more advanced than they appear.
Help me test Industries of the Caribbean and Lumberjack Industries!
Top

Some more research later, we have yet another update.

It's been a while, and I've added a bunch of stuff for the DPRK trackset. You might want to take a look at the parameters though, as this version can add up to 24 tracktypes, and a has lot of customisation options.

In line with upcoming changes to the house set, the station set will also be redone. Unlike how v1 was made, the dprk station set will be split up in NewGRFs based on theme, instead of having an arbitrary 'add-on'. Up first, DPRK Stations v2 Platforms. Filling up practically all station IDs available right out of the gate, this newgrf is as good as finished. The code has also been cleaned up, making coding faster and more reliable. Stay tuned for more updates.
DPRK Stations v2.0 - Platforms - 05/10/2020

The next DPRK newgrf to get an upgrade is DPRK trains. Twitter has once again proven a great source of narrow gauge train pictures. By the way also the only source, it seems. I also decided to make the Juche EMU usable however you want, instead of either unrealistically or just not.

Another NewGRF hot off the press. This newGRF contains a large amount of completely useless things to spice up your stations. This NewGRF adds a variety of eyecandy station tiles and waypoints, again using up almost all available IDs. Please note that the trackset will be updated to match the new depot sprites soon(tm). I also added a bunch of stuff that I would've considered excessive for the platforms newgrf, but it's not like I had the IDs available to add it to that NewGRF, mainly in the form of platform end waypoints.
DPRK Stations v2.0 - Eyecandy - 18/10/2020 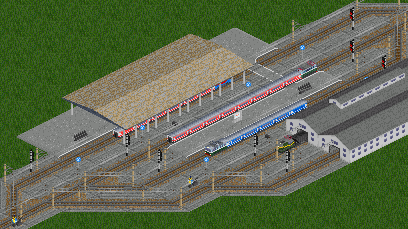 It's like christmas all over again. Brand new trains? Check. Freight overhaul (again)? Check. Same bugfix twice in a row? Same bugfix twice in a row.
This update for the North Korean Train Set contains just about everything I still wanted to add, but never did. The Korean State media published a small article on a new locomotive earlier this week, so I added that, as well as an EMU I had yet to add. I always wanted to make freight feel like it wasn't just an after thought. I never liked the look of the intermodal wagons, so now I've changed them to be significantly more realistic, based on photographs, instead of just me guessing what kinda containers they'd have. I added a bunch of open wagon types. They're by far the most common type of freight wagon, so only having 1 type seemed rather silly. North Korea still uses a lot of brake vans. To think the only variety I had was really ugly, not really ideal, so I fixed that.
I intend for this to be the last update for the North Korean Train Set. I hope you like it.

It took me over 3 years, but it's finally done. I had a blast making this NewGRF. I hope you've enjoyed playing with this set as much as I've enjoyed making it, and I hope you'll continue to have fun playing.

Dual gauge tracks are set to appear by default if you have the North Korean track set and narrow gauge trains. What exactly is the problem there?
No pics no clicks. Seriously.

I changed the DPRK trackset to work better with the Australian bridge set, which has a few bridges that look a lot like North Korean rail bridges. With this the trackset should be just about done.
DPRK Tracks 1.4 - 28/10/2020 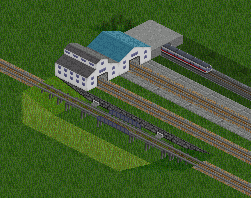 Changelog:
Added: Option to replace signals on tracks not from this newgrf with new signals
Added: Option to add only urban 3rd rail tracks
Added: Underground depot for underground metro
Changed: Bridge sprites no longer have ballast
Changed: Tweaked urban ground sprite
Changed: Depots now match the ones in the station set, with blue roofs for urban and modern

Changelog:
Fixed: Incompatibility of metro vehicles with some tracksets

tbh I've been waiting for the fixed industries set to play with it because of the issue with the excessive weight of the goods.

Mizari wrote: ↑01 Nov 2020 13:21 tbh I've been waiting for the fixed industries set to play with it because of the issue with the excessive weight of the goods.

I actually can't fix it. When NML updated, industries changed so much that I can't recompile the NewGRF without redoing the entire thing. That basically puts me off doing anything for it.
I've tried some stuff, but even some visual stuff like stockpiles for secondary industries are very different now, so I'd have to figure out how that works. EDIT: I can use a different newgrf to patch it. See below

I'm also redoing DPRK Station Building and Houses. The scale for that will completely different, so the sprites wouldn't match up anyway.
As you can imagine, completely redoing DPRK Industry does not take priority, and might take a while, my apologies for that. That is If I'll end up making it at all.

Fixes an issue with DPRK industry v1 that made cargoes very heavy.
No pics no clicks. Seriously.

I see. Thanks for the information. I'll keep that in mind when doing the remake of the industry set, should I ever do that.
No pics no clicks. Seriously. 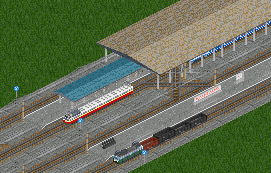