The TransRapid Track Set is a maglev track replacement set. The Transrapid system is a German high-speed monorail train system using magnetic levitation. The tracks in this set are based upon their real life equivalents at the test facility for the system in Emsland, Germany.

Development Topic
You are now in the Transrapid Track Set development topic. If you're looking for a download, you should visit the release topic.

Development related stuff should go here. Compliments and help on installing/configuring the set are better placed in the release topic.

That's why I decided to start creating something that does look like the real thing: the TransRapid Track Set. 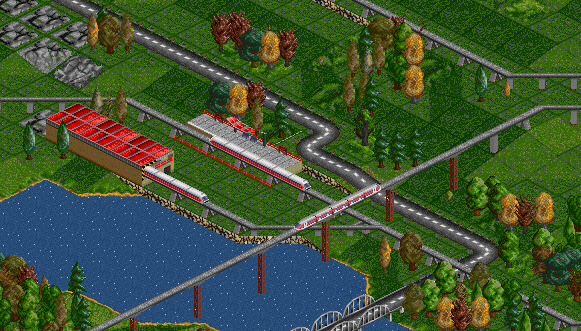 I thought about how this could be possible and couldn't see how it was done, your illustration shows it beautifully and I think it's great! I might use MagLev more if the tracks looked like that, the only problem I can see is bridges and tunnels, how will you do those?

edit: the default maglev tracks aren't that unrealistic, the guideway style they have rather than the monorail type track used by transrapid is what is used on the Japanese maglev system.

Ameecher wrote:the only problem I can see is bridges and tunnels, how will you do those?

Maybe I should start with that kind of stuff to see how it looks and how to make it look good. If it doesn't look good, I wouldn't even use the set myself!


Ameecher wrote: the default maglev tracks aren't that unrealistic, the guideway style they have rather than the monorail type track used by transrapid is what is used on the Japanese maglev system.

True, but it doesn't reflect the tracks used for the TransRapid maglev system (hence the set's title

Real elevated maglev track is impossible w/o code changes. I had worked on that problem some five years ago (when doing my first TR) , but since then nothing happened, code-wise.

I´ll try to dig out an old screenshot.

That's (unfortunately) true. The tracks in the screenshot above are based on optical illusion, but I don't think it's impossible to make it look good.

Go ahead and dig up that screenshot. I'd love to see what you came up with back then.


Tunnels shouldn't be too much of a problem. Stations look acceptable already, but the platforms should be a bit higher. I have to see how NewStations can help there.
FooBar's Tram Tracks | TransRapid Track Set | Metro Track Set | OpenGFX base graphics set | FIRS Industry Replacement Set
Dutch Tram Set | Dutch Trainset 2 | Dutch Road Furniture
Top

You can save yourself some effort by forgetting about level crossings. Roads should go under or above but not across these track types. Seeing as how you will be relying upon illusion, bridges may be a bit of a challenge. It seems to me that the original TT (not deluxe) had an interesting monorail bridge. Unfortunately I don't have it installed and my CD is buried somewhere only an archaeologist could find it, so I can't produce an image.
wallyweb on tt-forums: Screenshots - Projects - Releases
wallyweb on Simuscape: Projects - Releases
Other Stuff: TTDPatch 2.6 "Nightly" download - cirdan's OpenTTD branch (New Map Features)
Screenshot Of The Month Contest Winner: August 2015 - Tied May 2016 - January 2018 - December 2018 - May 2019
Top

Just what I've been looking for!

I wonder if it would be possible to prevent building a road across a maglev track?

Just what I've been looking for!

Thanks! Will take some time though before it's finished. Probably a couple of weeks before I will release some kind of beta, but don't keep me to that, I'm a busy man.


Hairysteed wrote:I wonder if it would be possible to prevent building a road across a maglev track?

NewGRF can't do that. Such a feature would require modifications to the game. I think I make it look like a road going under the track; should look good if you don't let you road vehicles used (as they would drive over the track!).
FooBar's Tram Tracks | TransRapid Track Set | Metro Track Set | OpenGFX base graphics set | FIRS Industry Replacement Set
Dutch Tram Set | Dutch Trainset 2 | Dutch Road Furniture
Top

I sure hope this will be OpenTTD compatible... although I can't see why it wouldn't. I definately see a need for this grf, since the most popular trainsets at least in OpenTTD seem to be DBSet and UKRS, both of which have Transrapid.

Edit: Could you do away with the fences?
Top

Hairysteed wrote:I sure hope this will be OpenTTD compatible

It sure will. The grf will be compatible with both TTDP and OTTD.

I can, but that would also remove the fences for the other rail type. Maybe I can come up with my own fences. I'll make it a parameter option to choose between default/mine/no fences.
FooBar's Tram Tracks | TransRapid Track Set | Metro Track Set | OpenGFX base graphics set | FIRS Industry Replacement Set
Dutch Tram Set | Dutch Trainset 2 | Dutch Road Furniture
Top

Could you draw the concrete pillars like this /\ as seen here instead of one straight pillar like this |, or would that be too close to the edge of the block (since the tracks themselves have to be in the center)?
Top

Good effort with the illusion

A bridge should only add the pillars and nothing else. May be then it looks good.
Your track looks really good, but without fences it would look even better

Hmm... I'm a bit concerned about what the tracks would look like on stations.

Well that's surely possible - we have stations now with raised "parts" such as footbridges, buildings, etc. It could be a building underneath with stairs to platform level above. I'd use the set if it was released.
Official TT-Dave Fan Club

Thanks for all the interest in this set!

I'll try to answer some questions/give my own opinion.

I plan to do that, in fact, I already made some attempts. It seems to be possible to fit it all in one square, but I have more difficulties getting the shape right. The /\-shaped pillars are definitely on the list though.


zero1000 wrote:A bridge should only add the pillars and nothing else.

I'll keep that in mind when I get working on bridges.


zero1000 wrote:Your track looks really good, but without fences it would look even better

Thanks! I'll eventually add an option to disable the fences.


Hairysteed wrote:I'm a bit concerned about what the tracks would look like on stations.

Currently not too bad actually, but it would look better with some kind of optical higher stations.


Dave Worley wrote:It could be a building underneath with stairs to platform level above.

I think "underneath" will be a bit difficult, because there actually is no "underneath". But I think there are some optical tricks to create an "underneath".

myself, as probably all others can't wait to get my hands on this set when you are done. keep up the good work

when you come to the bridges, why not just continue what you already started, just expand the pillars
Member of the

I like this a lot! good luck with it, and if the patch doesn't develop the changes, OTTD may endorse in this
The occasional look back at your past can teach you a great many things...
Top

Users browsing this forum: No registered users and 16 guests