Current version available at the DevZone.

Note, from v0.9.0 ISR does not support TTDPatch. TTDPatch players should use v0.8.2 which can also be found via the link above.

This is a project to work on the original industrial stations, made by Arte Pro, Norfolksouthern, and Oz.
I am working along with Aegir and Oz (and I hope the other 2 artists join in too, but they haven't been around lately...) Eventually, Born Acorn, Zimmlock and Ben_K also joined the project, collaborating with their fantastic art.

As for the coding, after a long bracket, Maedhros gave a push to the set preparing pretty much all the basic coding, and then mart3p continued the work, adding a lot of new features.

Here are some new features:
- Full coverage for all the basic cargos for temperate, arctic and tropical climates; and some of the advanced ones (mainly PikkaBird's Industry set and the ECS)
- Compatibility between tiles and freedom to combine them
- PBS sensitive tiles: some tiles react when they detect a train entering the track. The "train shed" facility opens its doors, for example.
- Animated tiles: some tiles include animation when they detect train activity. The "overhead crane" facility starts moving forth and back when a train is loading / unloading.

Current version available at the DevZone. However, currently we are in the process of adding a lot of new parts, so check out the latest posts for the most up-to date versions.
The GRF is still very incomplete, and since a lot of new parts are constantly added and stations categories are constantly switched, it's possible that you find trains stuck inside non-track tile stations and the program might crash.
To fix a savegame where you had an older version of the industrial stations renewal after updating the GRF file: first, deactivate indstatr(w).GRF in your newgrf list. Then, load the game, make sure that in the "new graphics status" you have the Industrial renewal set deactivated, replace all the stations with any other stations and save it (Note that even if after unload the Industrial Stations Renewal your stations look like default, if you don't replace them, this won't work) . Now, exit the game, and activate again the GRF file in your newgrf list. Then, you load again the game, activate the set, and manually replace all the stations.
It's a bit long to do, and it can be a nuisance to re-build anew all the industrial stations you had, but hey, it's a test GRF and our coder is doing an awesome work compiling all the work.

OMG! Let's use that for the farm sprites!

Can we see them normal size? Not pixelated?

yes: Download, open with Irfanview and press the '-' button at the top bar, et voilá
Top

I don't have anything special with cows, but those ladies look quite ok. Nice work. Can't we place them in the countryside somewhere random, in stead of those grain-fields or sth?
Contributor to the The 2cc Set and Dutch Trainset. Inventor of the Metro concept. Retired Graphics Artist.

But there are also white/brown cows where I'm from, i.e. cows with white "background" color and brown spots.

Or how about an easter egg: The lilac "Milka" cow?

Let's not stop at cows!

Sheep? Cows are the way to go! Cows > everything.
When in deadly danger, when beset by doubt, run in little circles, wave your arms and shout.
Never attribute to malice that which can be adequately explained by stupidity.
Top

Bring in the pigs and horses!

Moo? You got Mad Cow Disease or something?

Good sprites though, means the "Mooing" from farms is now actually coming from something.
My OpenTTD screenshot thread.

Very cool!!
Can we occasionally place one or a few on tracks close to farms? The fences around the rails might be broken in certain parts, and... "Cow dies in fireball after collision with train"

and the train would break down!
Top

That sprites are amazing

I'm glad you liked them!

Actually this was just a silly joke to show something new that is coming:
I was tralking with Aegir and we decided to renew the Industrial Stations set. Currently it is quite old, and with the last patches, some glitches have appeared.
So we decided to make justice to such a nice set, and with the help of Oz and hopefully the other original artists: Norkolfsouthern and Arte Pro; we will give a boost to this set.

Basically this is what we have in mind:
- Make more stations. To have at least one station for each cargo (paper, iron ore, water...)
- Make common elements, so that one can have a combined station that looks nice (eg: oil + coal) Common elements include common track bases, stop buffers, platforms, office buildings, etc.

Take a look at the images to see a preview of what's coming:
- As you can see in "industrial.png" the bases have transparent zones (the ones in blue) so that they can fit any climate and most important, any track type (monorail, maglev, narrow gauge...)

- Now this is the original meaning of the "moo" joke: I began drawing a new livestock station. This is done from scratch, but I might also use the original sprites and put there pigs.
In "cattle.png" you cans ee a cattle dock, with some sheds and an ellevated dock to make them ride the train. The platforms to the right are the default platforms and ramps. As you can see they match the height and the wall of the cattle dock, so you could for example add a ramp at the north end of the cattle dock if you want.
All the livestock tiles get crowded depending on the waiting cargo. This is where our friends from the 1st post enter

More is to come! 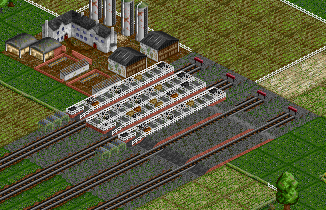 wow, that looks very good, much better visable as the original cattle station. me likes

Snail wrote:"Cow dies in fireball after collision with train"

Think of the Cow!
i think explosion would be beter

SanchiCircle...
I'm just going to throw my 2c in and say that they look grand, but the fences are overwhelming and I can't really make out that they are actually cattle.
I'd still use then and then they're fantastic... I just think you should maybe tone down the fences a shade or two to allow your MOO-ness to stand out.

edit: but on second thoughts, your current fencing is the same as the fencing around the fields... maybe it's just the quantity... maybe enlarging the pens will work...

Ouu, excellent. I was thinking about doing this just last week, then remembered that I'm starting my masters next week and won't have any more time to devote to this. I'll share my ideas with you, but of course I'm not expecting you to follow anything I say (Also, I won't be a prick and take credit for these ideas either). My plan was to make extensive use of non-track tiles for elements such as grain stations I & II, the coal station, chemical stations and so on. And then for the track tiles, have an assortment of booms, cranes, oggers and such that would piece together with the non-track tiles. As well, they were to have uniform ground-sprites (which I'm glad to see you have), and they were all going to be compatable with the snow-line, and varying yard elements from the up-coming version of the Canadian Stations Set.

Now that you've started though, I am requesting two things, can I (or you, doesn't matter) make snowy ground-sprites for the set that will be implemented? And, can I encorporate the new ground sprites into the Canadian Stations Set so that my yard sprites will mesh? On offer are some chain-link fences you can have for the perimeter.

Hey, lifeblood, who says that you must be out? Join in!
Even if you don't have too many time to collaborate, any helping hand will be appreciated. Even if it's just comments, or advices, it's always good to have someone pointing flaws, or details.

I was thinking about the snow too, if you can help with it, that would be excellent! And yes, you can use the ground sprites for canadian stations

I'm glad I can be of assistance. Post your ground sprites, and I'll get started with the snow.