You may have noticed a theme among my recent releases, so why not take a winter vacation to Honolulu with Hale!

The base tropic houses, particularly those in OpenGFX always seemed a little lacking to me, mostly because there are so few of them, but also because the style didn't really fit with the types of games I wanted to play on tropical maps. I've also wanted to draw houses inspired by the various neighborhoods around Honolulu every time I've visited. This past week I finally decided to act on these two feelings and drew a simple set to replace the base set tropic houses as a static grf. 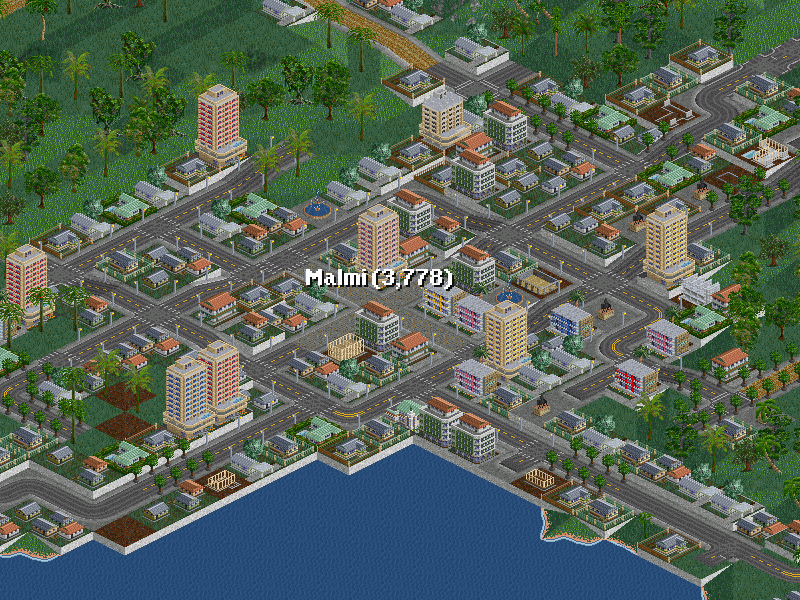 What Hale is:
Hale is (currently) 8 houses, 3 apartment building, and one temple/church to replace the equivalent existing sprite in the base set. The sprites are drawn by myself, and each is inspired by a real building or buildings somewhere in Honolulu, mostly Downtown, Mo'ili'ili, and Kahala thus far. This version of this GRF is intended to function as a static grf, so you can use it multiplayer games that use tropic maps with no Newgrfs loaded.

What Hale is not:
This version of the GRF does not add any new buildings or other features to the game, it only replaces sprites to give your games a bit more Aloha. The current version does not replace the tropic office buildings, nor does it yet replace the arctic offices that also get reused in tropic, though both of these are planned for later. There is generally no intent to replace temperate sprites with the static grf version of this set.

What Hale might be in the future:
In addition to replacing those aforementioned office buildings, I would like to make a separate full town/house set Newgrf as an outgrowth of this to allow for greater variety of houses and architectural eras/styles. The small set of base tropic houses is very limiting, as most of the building need to look plausible from the 19th through 21st Century at least - a period that saw rapid change and development of building styles and types in Hawaii. 1880s bluestone shophouses in Chinatown, 1970s Waikiki hotels, and 2010s high-rise condos are all conceivable styles to add that just can't fit within the framework of the base set houses

This actually looks really good. We've been needing more varied houses in openttd for a while now, so I hope this ends up becoming a full house overhaul one day

This looks really quite good. I love the work you've been doing recently.
No pics no clicks. Seriously.

IT'S SO GOOD!!!
Former NewGRF Coder and Sprite Artist.

This looks great, I'll have to try this with Cindini

Just what I was thinking LOL!
Do you like drones, quadcopters & flying toys? Check out Drone Strike Force!

Lovely! Really happy to see the increase of tropical play lately, as it's become one of my favorites. Well done, thank you.
Top 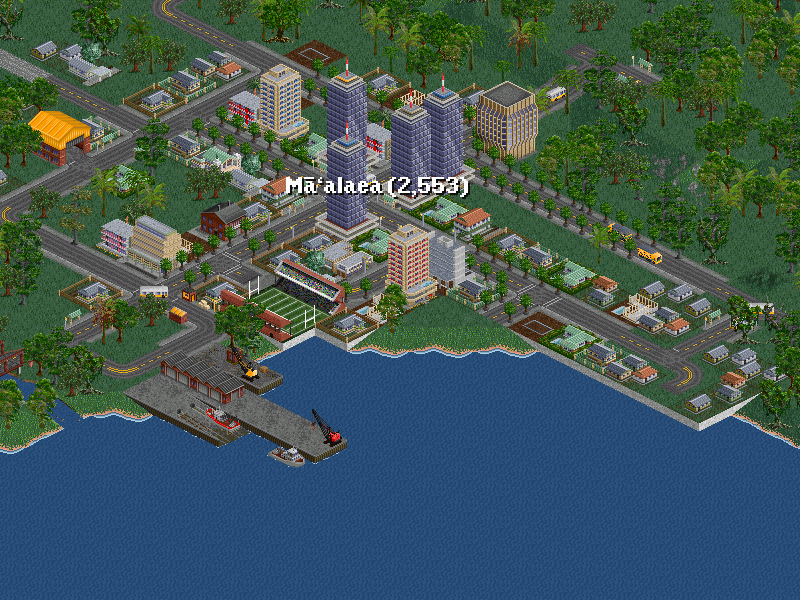 This version replaces the arctic office buildings that also show up in tropic. In OpenGFX, the tall office buildings that are shared between tropic and arctic are particularly incongruous, being rendered and clamped rather than pixel-drawn sprites, and with large areas of bright Company Color. I took care to select Honolulu office buildings that matched the built-in dates for these buildings, could fit in both climates, are somewhat analogous in shape, but which better fit the Hale and OpenGFX art style. I have retained some subtle CC accents to keep the spirit of the buildings, and have provided snow sprites, so they will still look alright in Arctic. Likewise with the 1960s 'Shops and offices' building shared by these two climates. There has also been a contribution to towns' public art programs.

supermop wrote: ↑10 Jan 2022 02:32 ... The small set of base tropic houses is very limiting, as most of the building need to look plausible from the 19th through 21st Century at least

Totally agree, it is an exact reason why I startet HotHut tropical houses replacement project, inspired by African and Middle East architecture.
Top

This version replaces the Tropic 2-tile office building with a sprite inspired by a contemporaneous office building in Waikiki, as well as some subtle changes of two temperate buildings that get reused in Tropic so that they match the theme a bit better. Small improvements to other sprites, particularly using Zephyris' new Ogfx pavement texture.


Thanks to Andythenorth for sage advice on pixel contrast, particularly regarding how to get remotely close to drawing a lava rock wall with the 8bpp palette! Thanks To Zephyris for the fresh looking pavement as well.

Sorry - noticed a couple errors with two of the office buildings, so issuing this quick update to fix:

Why isn't it on bananas?
Top