OpenGFX+ Stations
The stations in OpenGFX have always been lacking. The double platforms are extremely unrealistic, and being limited to what the basegame gives is a bit of a shame, so I made a newgrf that gives you the freedom to do whatever you want. Want Maglev stations on monorail? Sure, why not. Everything is possible 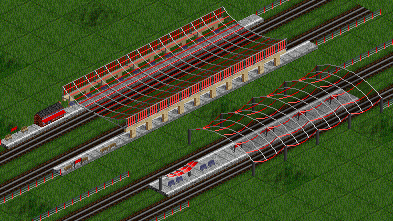 [+] Spoiler
Do whatever, just use GPL v2+ when you use this stuff.

Very nice, not overloaded set, which has always been missing. Well done! Thanks Erato

If you let me, I would have some suggestions:

1. Buffers for end stations
It could be as station fields, or as in CHIPS stations, where it would appear itself at the end of the station, where there are no further tracks. 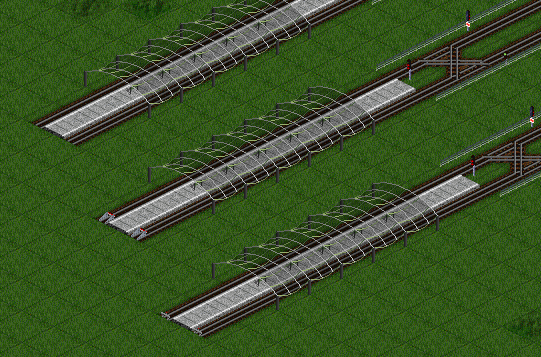 2. Passengers at the station
Although I'm not a great eyecand player, this is a detail that definitely makes the game more enjoyable. Passengers are displayed at Japanese and Kiwitree stations (I don't know others). Especially in the case of Japanese it is interestingly done, where passengers "move" around the station. In Kiwitree, on the other hand, graphics are better suited to the number of waiting passengers - at the station you can already see a dozen or so passengers, you can also see when it expects 1000 and when 5000 passengers.

3. Set OpenGFX + on the station list to replace the original ones.
These stations are no different, so they could (?) replace the default.

4. Small roofs facing the other way 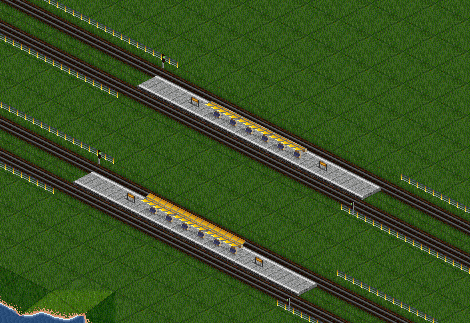 Thank you, Erato. I hope your work finally makes recycling graphics more acceptable (provided the coding provides something new), because without it stuff like this is impossible.
Top

Really appreciate this set - was something I'd been hoping to see for literally years, and even had a few false starts at sprite kitbashing!

Of course the Base set stations are very simple and an OpenGFX+ set should be a simple grf too, but the single sided platforms really showcase how odd the various shed structures are, particularly the supports for the Maglev roofs look very underwhelming when they are just directly on the grass without any base. The wide open sides also look kind of odd on the edge of a platform

Station.PNG
(1.23 MiB) Not downloaded yet

I feel a short foundation / pony wall where the roof structure meets the ground would go a long way towards helping these feel more substantial rather than floating - could be drawn as a slice of grey platform edge, bricks filling in the bottom of the arches, or just grey footings at the bottom of each column. Are you just referencing sprites straight from the base set, or did you chop these up at all? I'm happy to pitch in with a bit of pixel art / architectural perspective!

LaChupacabra wrote: Passengers [on station tiles] are displayed at Japanese and Kiwitree stations (I don't know others).

Just for the record, "passengers on station tiles" is a feature derived from NewStations first implemented in v0.4 (march/april 2005).


LaChupacabra wrote: Especially in the case of Japanese it is interestingly done, where passengers "move" around the station.
In Kiwitree, on the other hand, graphics are better suited to the number of waiting passengers - at the station you can already see a dozen or so passengers, you can also see when it expects 1000 and when 5000 passengers.

Again, both features, passengers "moving around" and  showing "amounts of passengers", had already been in NewStations v0.4.

I chopped them up from the spriteset on the openttdcoop website. I did some minor editing to make the island platforms work for instance, but that's it.

If you let me, I would have some suggestions:

1,2,4 I have no intentions to make any original sprites for this.
3 Can't really, and even if I could I have no reason to.

Falsehood aside, and just for the record, they did it better.
No pics no clicks. Seriously. Also stop using Modern Maglev Trains. Use RIMS instead.

How accessible is the 'automatic' layout shown by the default stations - whereby a 5 tile or longer station places the roof only over the center section and leaves the platform ends exposed? Would it be possible to apply this behavior to the island or side roofed platforms as shown:

For what it's worth, I made some modifications to the sprites to give the side walls / columns a foundation so they look better when sitting on grass in non-platform configurations. I also made the Maglev roof a bit more substantial in structure, and improved CC elements on Monorail and maglev:

Platforms Revised.png
(87.07 KiB) Not downloaded yet