I've been working on various small things on and off, but never shared them. The VACE (VTOL) project stemmed out of one of these, but I have a few others. I figured I'll just share a few of them here. Some are just sprites, some are tiny newgrfs not worth putting on Bananas.

After messing with aircraft for a while, I decided to try out a couple ships.

The first is the one closest to my heart. Those of you not familiar with the upper midwest US may not realize how large the Great Lakes are or appreciate the amount of shipping traffic in that crosses them. I grew up seeing these ships when I'd pass through Duluth, MN, and later when I lived there. Duluth is the most inland port in the US. Most of the ships carry taconite pellets and grain. The most famous of the Great Lakes Freighters was the Edmund Fitzgerald, which was made famous (outside the region) by the Gordon Lightfoot song in the 1970s.

This isn't any particular ship, just sort of an interpretation of the kind of ships I saw when I lived there.

Fun fact: because of they only travel in fresh water, the ships tend to last much longer than saltwater vessels. Typical life is 40-50 years, but there have been ships in use close to a century.
My NewGRFS:
VACE: VTOL AirCraft for Everyone | Martian Industries | Martian Town Names | Experiments and One-Offs
Top

I saw a reference to a solar dynawing sail supertanker proposal and decided to give it a try.

I don't like the profile views, but I was too lazy to draw the sails at an angle.
My NewGRFS:
VACE: VTOL AirCraft for Everyone | Martian Industries | Martian Town Names | Experiments and One-Offs
Top

I've started working a bit on Martian Industries again. I got frustrated trying to deal with a tree farm clipping issue and decided to try out a Martian tracked vehicle I call a Marscat.

I'm not ready to take on another set at this point, but I may end up doing a mini-grf with a few ships in it if I get ambitious.

I do think a Boeing Pelican would be a really nice late-game "ship" though.
http://www.boeing.com/news/frontiers/ar ... /i_pw.html
My NewGRFS:
VACE: VTOL AirCraft for Everyone | Martian Industries | Martian Town Names | Experiments and One-Offs
Top

I've been thinking about this for a while and decided to finally see how it would look. I don't know how far I'll take it, but... 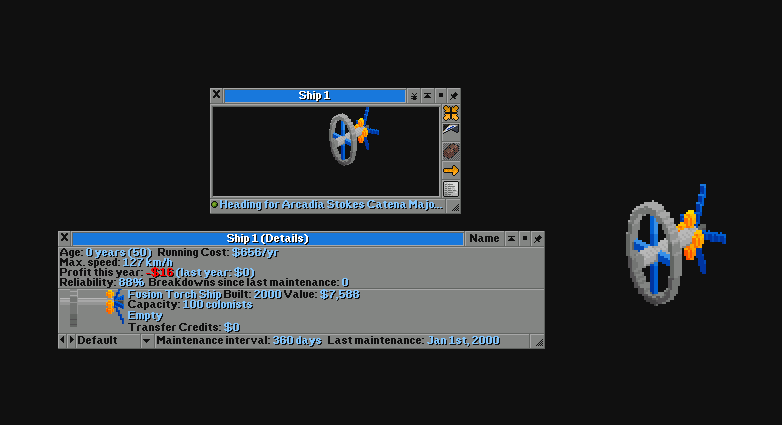 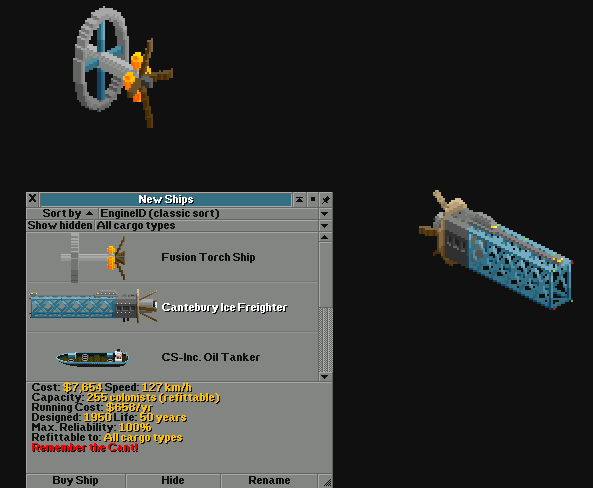 I'm only starting out on buildings. I don't have the hang of them yet, but here's an initial concept for an asteroid ice mine.

It's something I've never seen in OTTD, and along with the black water as "space", it is an unique idea, I like it!

I've been playing around with terrain a bit. I added starfield to the black, otherwise a ship would just look like it was standing still. I don't have a good pattern for it yet though - its too regular.

I've also started converting over the land tiles. For now I'm using the OpenGFX temperate base. I also threw in a nav-sat as a buoy. Oh, and did a quick passenger liner.

helios-passenger-liner.png
(61.23 KiB) Not downloaded yet

I'm on the verge of making an official project out of this, but I'm wondering, is this of interest to anyone else?

For vehicles:
Ships would be the primary transport.
Monorail to get cargo to ports
Aircraft (spacecraft) possibly for very short range hops - I'm thinking 128 or less.
RVs, probably not, though but maybe trams.

Interesting how individuals who have never shared a similar thought with each other end up with near-exact visions.

Back when you started on Martian Industries, I started thinking about how a space-based scenario would work, and you've pretty much nailed what I saw. Oceans as space, ships as spacecraft, docks and airports as spaceports, airplanes a short-hop transport, monorail or some other future rail for long haulage, trams as high-speed intrastate transport, RVs for occasional slower intrastate transport.
Do you like drones, quadcopters & flying toys? Check out Drone Strike Force!

but I'm wondering, is this of interest to anyone else? 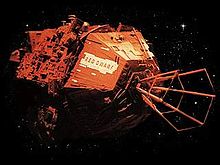 I've always loved near future, physics based sci-fi. Books like Unincorporated War, The Expanse series, The Heritage Trilogy, RPGs like Diaspora, and then watching the Expanse TV series got me psyched up again.
My NewGRFS:
VACE: VTOL AirCraft for Everyone | Martian Industries | Martian Town Names | Experiments and One-Offs
Top

When your toddler asks you for a dinosaur, what can you do? Anyone know the cargo capacity of a brachiosaurus?

oftcrash wrote:When your toddler asks you for a dinosaur, what can you do?

A whole young generation in need of fun transport and eye candy. I tell you, market share will sky-rocket!!

Euhm, 5? Not too many, not too few.
Fuel consumption may be crazy though!
Being a retired OpenTTD developer does not mean I know what I am doing.
Top

Thumbs up for a Flinstones Set!
Top

I always felt a fantasy-set would be fun to be play with. Tree houses and steam-punk trains and stuff.
...
But Dinosaurs one up that

Caro capacity could be improved by some, err, storage equipment:

No reason why dinos and steampunk can't be together!

I was messing with a steampunk idea a couple years ago. I created an airship, but it was too blocky. Something like that would be easier to start with a 3D render. I just read the Aeronaught's Windless recently though and it got me thinking more about it.

I'd happily contribute though if someone else wanted to take it on.

You read my mind with the brachiosaurio.

I have this "little" friend on my list of future vehicles for Famous Cars; Exactly for continuing with the flintstones vehicles.

But i only have two hands, and i work in many many sets at same time. It's complicated to make all.
NewGRFs__
City names/Landscape: Naruto | Planets | Lovers | Halloween | Kaijus
Vehicles: Famous Cars | Super Cars | Racing Cars | Cars Cars | Improved M Cars

I found a good render of the train from Firefly's Train Job episode. Very cool mag-lev/monorail. I'm going to fiddle a bit and see if I can come up with something similar.
http://www.leestringer.com/Images/Firef ... 026_hd.jpg
My NewGRFS:
VACE: VTOL AirCraft for Everyone | Martian Industries | Martian Town Names | Experiments and One-Offs
Top

The Visitors arrived suddenly, their citadels appearing without warning around the world. They spoke of vast empty worlds in need of colonists, and offered that opportunity to the people of Earth. In exchange, they would provide advanced technologies. There was hesitation at first, but the examples provided by the visitors proved too tempting. Soon, governments and corporations were lining up "volunteers". There were those who objected, stating that no one ever saw or heard from the colonists again. Their cries fell on deaf ears as more advanced goods placated the general populace. Who knows, maybe they really are colonizing the stars. Or maybe they are being eaten by aliens. Either way, there's money to be had in the transport business.

alien-citadel.png
A Visitor citadel rises darkly out of the forest.
(351.76 KiB) Not downloaded yet