Some thing i have been working on for abit now.

what's currently in the set 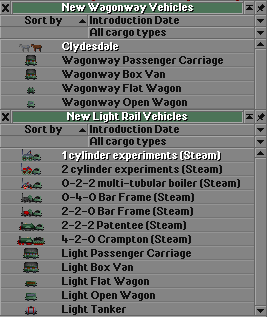 Last edited by Izel on 22 Jul 2010 14:27, edited 4 times in total.
If I have seen a little further it is by standing on the shoulders of Giants. Isaac Newton


It's better to ask forgiveness than it is to get permission. Grace Murray Hopper
Top

Interesting! Good start, but honestly, I'd lower the speed of the Trevithick, other than that, great looking start. Just need to find some time to play with it now

why not a screenshot for such nice project. 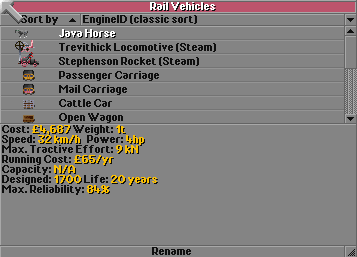 Question. How can one horse provide 4 hp?

FooBar wrote:Question. How can one horse provide 4 hp?

I recently heard somewhere that the horse power used to be the average power of one horse (during a day IIRC). So, the peak power of a horse actually is much higher than 1 hp

Edit: Wikipedia says (citing a Nature article) that a peak power of 14.9 hp has been measured for a horse (though only for a few seconds). The average power of a horse is said to be less than 1 hp.
"The bigger the island of our knowledge, the longer the shore of our ignorance" - John A. Wheeler, Physicist, 1911-2008
Top

I guess it's an average value since a peak value wouldn't be statistically correct in this one. And a horse for that matter always operating on peak power would 'break down' in no time. Furthermore would the value for 'life' not be 20 as a result of it.

However this is a promising set! Now I can start my company in 1700!

why 1700? set it back to, oh i dont know, 1000? 0? probably would need some sort of recoding to get it BC, but anyway, lets play transport tycoon through the dark ages. once one has the capacity to go back that far then others will.
Top

It's not an exact comparison, since most machines don't run at maximum horsepower all the time either. A team of horses will do the work of a 35 horsepower tractor, but require 1.2 times the labor to do it.
Who is John Galt?
Top

the power a horse can deliver over long times varies widely between breeds. a racing horse would usually have less power, but higher speed than a working horse.

the original horsepower definition by james watt (i think) involved a working horse that goes around a mill, and counting the average amount of times it could go around per hour.

the maximum tractive effort figure of horses should be significantly higher than many locomotives, because the static friction of hooves on dirt is higher than steel on steel by and order of magnitude, or when was the last time you saw a horse slip? the force that a horse can deliver to accelerate is almost at any time limited by its power, not by the friction.

you could of course also include other working animals like mules or donkeys, balancing speed, power, running costs and reliability between them
You might not exactly be interested in Ferion, but if you are, have fun

Laughs ass off (see screenshot below).

thegreatpl wrote:why 1700? set it back to, oh i dont know, 1000? 0? probably would need some sort of recoding to get it BC, but anyway, lets play transport tycoon through the dark ages. once one has the capacity to go back that far then others will.

You go play trough the dark ages (and wait a lot). I'll start at 1700 since this set earliest vehicle is introduced in 1700.

I'd like to know how you got the NARS to be compatible w/this set. I can't get the early equipment to show up with it.
Regards,

Sorry this set is for UKrs so i just test with that,
but Horse may have multiple NewGRF engine sets on to get NARS to work with it,
in testing thou this cores problems at the dates i change stock introduction from UKrs.
this will be fixed in next up date.
If I have seen a little further it is by standing on the shoulders of Giants. Isaac Newton


It's better to ask forgiveness than it is to get permission. Grace Murray Hopper
Top

I don't know if you have more engines planned to complement those already available. If not, these locos might fit in nicely:

This is such a great idea! I think it would be great to play a game starting at 1700 (at the beginning of the Industrial Revolution), and thanks to the UK pack and eGVRTS, we can transport passengers and goods and stuff early on. Just make sure to use a road texture that shows the cobblestones (Total Town Replacement).

I think we may need an early canal-boat & barge GRF to go with it, however. And wouldnt it be cool if some of the industries acted like oil platforms, with a certain date they became available? Like printing press, 1580 CE. Factories would be like 1750 or 1800... etc. Some of the industries obviously wouldn't be around until later... I havent used the ECS or Pikka's Industries, but maybe they already have that functionality in it?

I dunno. Would be a bit of a project... but I think horse-drawn canal boats and later steamers would be helpful to transport larger quantities of goods.

This website has some good period information on Britain's infrastructure in the 18th-19th century: 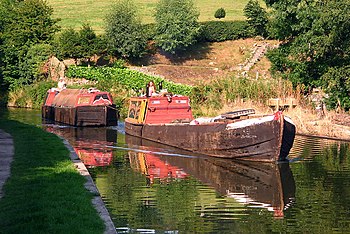 2CC ships, has some early ships. How early i forgot.
Top