This pack includes the ECS metro train imported to Prague, capital of Czechoslovakia, in 1974 from Soviet Union. It's been running till 1997 on 2 of the 3 Prague's metro lines.

The blue version is the russian counterpart - type E, as it can be seen in Moscow, Petersburg and Budapest metros among others.

The model is handmade in 3D Studio MAX, hence the imho nice antialiasing and shading. Those dots on the sides of the roof are not aliasing problems, but air intakes. Yes, the model is detailed.

In version 3.0, the 81-71 train was added, the successor to E/ECS. It features both Prague and Moscow liveries. E and ECS will now become obsolete in 2007 and 1997, respectively.

Version 3.5 brings the 81-71M train, a modernised version of the original 81-71. Currently running on Line A in Prague, it is planned to replace the old 81-71s on Line B. Also new is the addition of the metro starting sound and a "=M=" prefix for all the trains, so they can be easily found in the scenario editor.

The last and newest Prague metro train, the Siemens M1, is included in the final 4.0 package.

Special thanks to Plastikman, Oleg and Andel.

update 19.3.2006
Version 2.5 released with Prague graffiti livery - can be coupled with the clean Prague one.

update 19.7.2006
Version 4.01 with a small bugfix, the train ordering (driving carriages at the end / carriages inbetween) now works as it should.

update 30.8.2006
4.02 changes the E, ECS and ECSG trains to be single units and they will face opposite directions when coupled. I also bumped up the reliability to 96 and added a section in the readme on how to improve the reliability with my trains. As an added bonus, I've added the 81-71M prototype train (white livery), which is currently running on line B, transporting passengers.

update 8.3.2007
4.1 - all trains now have separate bogies, which is mostly visible in tight curves. Next, as pointed out on ttdrussia forums, the E train is in fact the EZ train, so a rename of the DAT and the internal name was necessary.

update 30.10.2007
4.4 - fixed weight of the ECS graffiti version and did corrections to the Siemens M1 Vodafone paintjob.

update 5.5.2008
4.5 adds the russian modernisation of the 81-71 train, the 81-71.6K, and the Maracaibo version of the Siemens M1 train. The latter uses overhead wires instead of third rail and doesn't run underground, that's why I've chosen for it to have dark windows. I've also updated the 81-71M unit with better graphics and limited the Vodafone M1 livery to the year 2007, as in real.

update 31.12.2008
5.0 brings the czechoslovak prototype train R1 that was supposed to run in the Prague underground before a political choice saw it replaced by the ECS trainsets from Russia. The pantograph version, R2, planned for the Bratislava light rail system is included too, as well as its company colours version. Furthermore you'll find the Warsaw 81-71, the Kiev 81-553 Slavutich (similar to Prague's 81-71M) and the 81-71.5M Krasnaya Strela from Moscow. Fixes include proper sound for road crossings, overhead sparks position on relevant trainsets and incorrect double bogies (static and moving) on the Moscow and Prague 81-71s.

update 30.4.2011
Added Moscow's 81-71 retro train and Prague's Siemens M1 in the KB advertising livery, along with a company-coloured Siemens Metro unit inspired by the abandoned M2 concept for Prague's line B.

update 15.9.2011
A small update to 5.5 to complete the advertising liveries on the M1 train - the blue Citibank from 2011. All the M1 trains are now non-obsolete, so you can build a colourful metro system at any time. 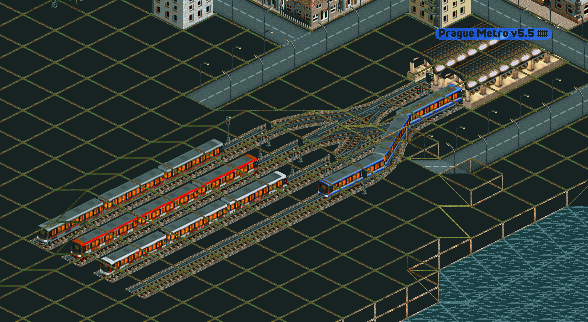 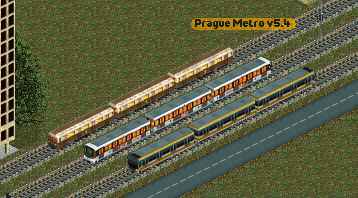 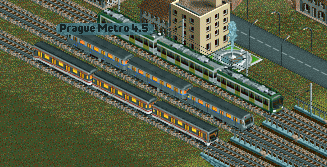 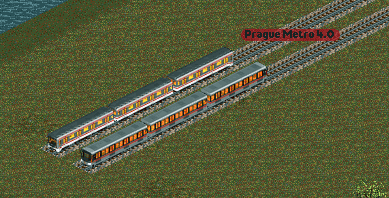 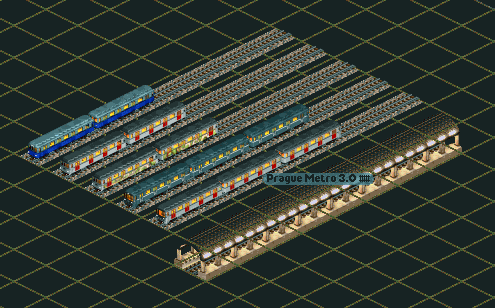 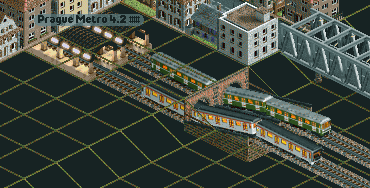 Thank you, thank you. Great work

My released packs are no longer online. In case you own them, please contact me or upload them on a Locomotion site.
Top

Looks good, will try it when my workload isnt as heavy

These cars are beautiful. Good work. Thanks.
Take a look at the trains, planes, buses, trams and ships at
http://www.YouTube.com/user/metromaster2010
Top

beautiful *sniffles*
Andel
Quis custodiet ipsos custodes?
DISCLAIMER: The views expressed in this post are not necessarily those of Andel, who will do and say almost anything to get the attention he craves.
[/size]
Top

Thanks for the nice comments!

I'll have a go at those other liveries soon as I've found some good pics on the net.

You can still see them in Budapest on line 2 and 3.

(I guess they're in operation in Moscow as well as other cities in the former Eastern Block.)
Indivisibiliter ac inseparabiliter
Top

Really? That's cool. In Prague ECS hasn't been running since 1997. Only the 81-71s (followup to ECS) are running on line B, other lines are serviced by modern Siemens trains and renovated 81-71s.

So here's a test version of the Moscow/Petersburg/Budapest livery. The Locomotion palette doesn't like the lower blue part obviously. Also the bright roof looks boring, maybe some gradients would help... 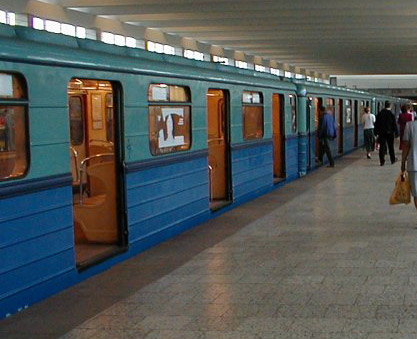 The blue may be a tad bright, but apart from that it looks good

Blue is my favorite color. Any shade. The cars look spectacular in blue. Please release them at your earliest convenience. I can hardly wait.
Take a look at the trains, planes, buses, trams and ships at
http://www.YouTube.com/user/metromaster2010
Top

Ok, I think I got the most out of it I could. There's more detail on the roof and blue is a bit softer. This was a b**ch to do honestly.

I need some rest now and then I'll make the graffiti version, which should conclude the package for now.
Top

Well the server broke down yesterday while i was uploading the new version.

Anyway, after the graffitti livery... Has anyone an idea on how to create stations? I have a model of a Prague metro station on Line A, which might look nice when built underground in Locomotion. I think I'll just decompile one of the existing .DATs and see what's in there.

This game is badly in need of commuter rail stations that only generate passengers. I have not seen mail, livestock, goods or grain turning up at real life commuter/metro stations.

For a start, bus/tram stop do not generate any other traffic but passenger.

I am looking forward to the release of the metro/commuter stations and thank you very much for the Moscow/Prague Metro EMUs.
Top

mh i created a new busstop-graphic. you have to make one tile and this will be used 2 times in the game. upper left und lower right. don´t make two station-tiles, make one, because of the overlaying of the train.

link to topic
i did all models/renderings/textures myself. no conversions.

SQ, I don't think I understand what you mean.

I'll try decompiling those DATs and see for myself. You can also post what you mean on the german forum, maybe I'll get it then. No promises though.

i´ll try again. see pic2. this object will be used in different angles for both sides of the road/track. therefore see pic1.

i did all models/renderings/textures myself. no conversions.

OMG! I've left my trains unobserved just for a couple of minutes in Locomotion and guess what has happened? Someone sprayed graffiti on them. Crazy.

I'll have a look at the metro station now and release the pack then. Thanks for the info SQ btw, I think I get it now.

Oh and you can couple the Prague ECS and the graffiti ECS together for some realistic train combinations.

Thanks for all the praise too! Definitely gives me more will to continue the project. 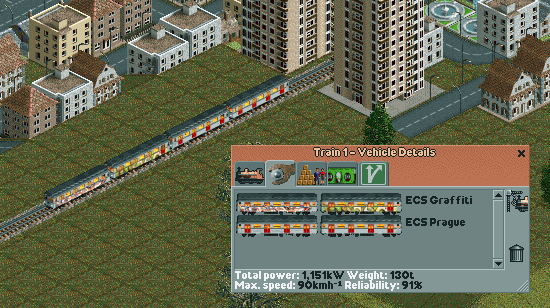