I've made a new scenario where you have to join the industries on either side of a deep ocean. you have to deliver 50,000 tons of steel, beginning in 1934. No competing companies, no mods.

Very interesting idea. It reminds me of the 'ocean assault' maps from Total Annihilation, where you were forced into making massed D-Day style aerial and amphibious assaults. In fact, I think I'd be playing this map and wanting to build battleships and hovercraft

"(Locomotion is) one of the best-playing games of its type." -Chris Sawyer

Mind that you need a possibility to earn money on one side of the ocean, before you can make an attempt to reach the other side.
-
-
39 years experience with trains and still driving.
-
-
Top

Yes, but you have to wait for them to be invented.

Man this scenario is giving me a hard time!
13 years and not even 40% done.
Top

The beginning is really hard. I couldn't find a way to bypass the ships for the first years. Thing speed up dramatically with the first bridge. I guess there's a reason why this game is not called floatomotion

I ended up with 6 bridges to run 3 not connected rings. One for the 3 south mines, One for the 3 north mines and one for steel of course.
This entry is very perfectible, mostly because I'm sure the early cash management can be dramatically improved.

Nice scenario.
Like ADN said it's hard at the beginning, but after the first bridge you have plenty of money.
I started in Coalhampton with trams.
After that, ships to the oilplatforms and goods to Coalhampton.
After that coal, iron and at last steel.
I've build 8 bridges, top get maximum speed.
Used some mods to transport the cargo with the trains.
Thanks again DJC,

I needed 32 years, 4 months, but speed wasn't the goal, only nice lines.

The steel mill and the ÖBB coilwagons.

The eight bridges to the other side.

28 Years and 1 month. Well I used some 4-5 years on optimizing my train lines, so I might have been able to cut of about 2-3 years. I started out by building trams, then a ship coal line (feed by trains), and I think that was my major mistake! I say, keep with the trams untill you have enough money for a bridge, after that, money is no longer an issue.

Anyway, I'm going to try this approach now... I'll get back and tell you how it turns out!

Hey, it was a very challeging and fun scenario to play. I did a few screenees with it because i think it's way to long to explain what i've done with it and all. 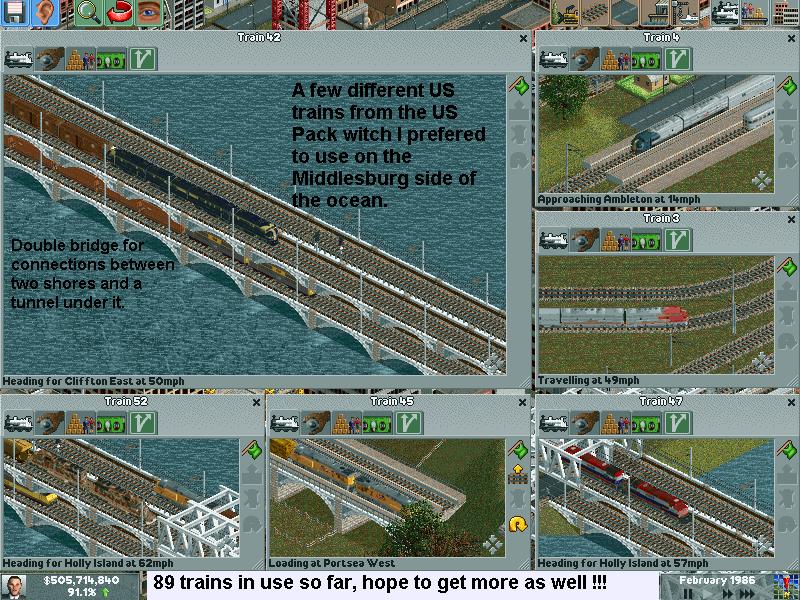 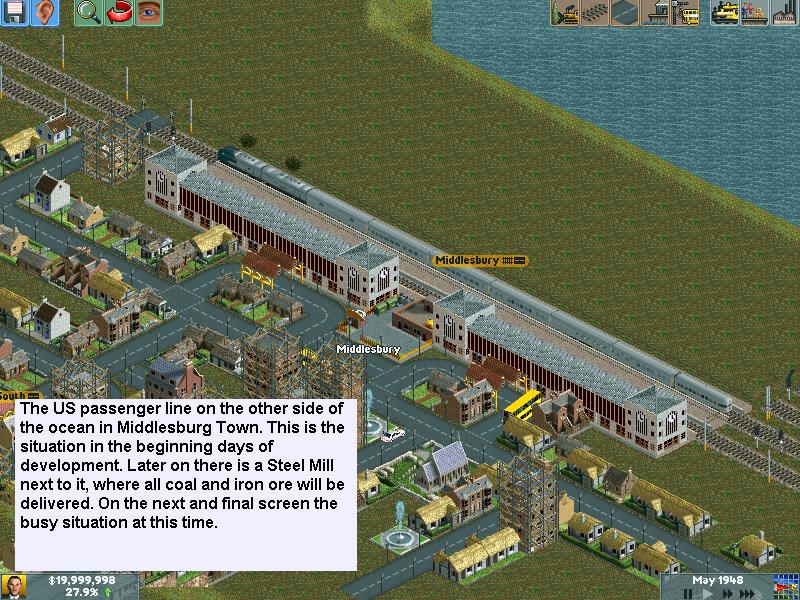 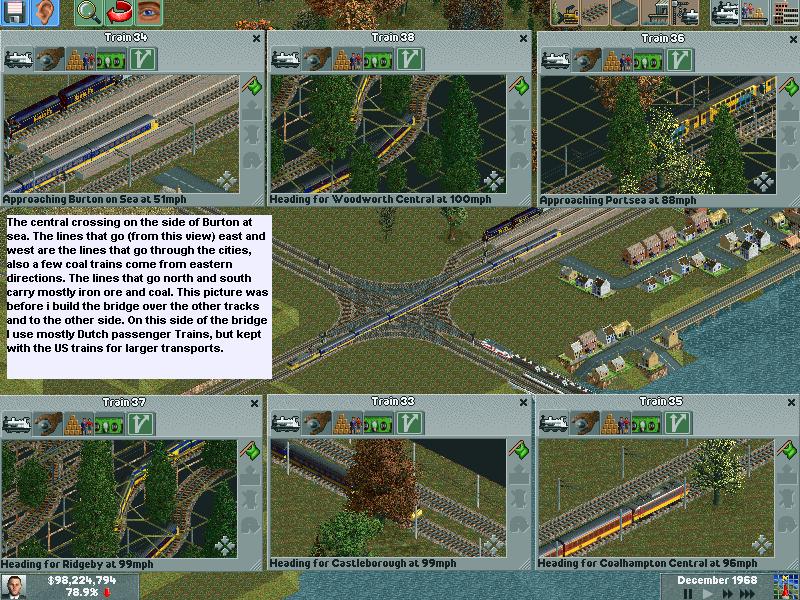 The Burton on Sea Side of the map and the Middlesburg Side on the map. 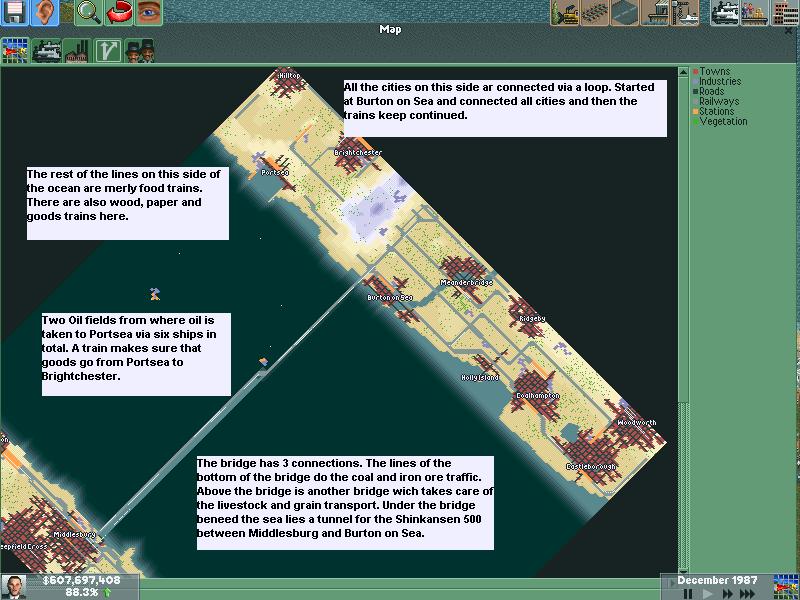 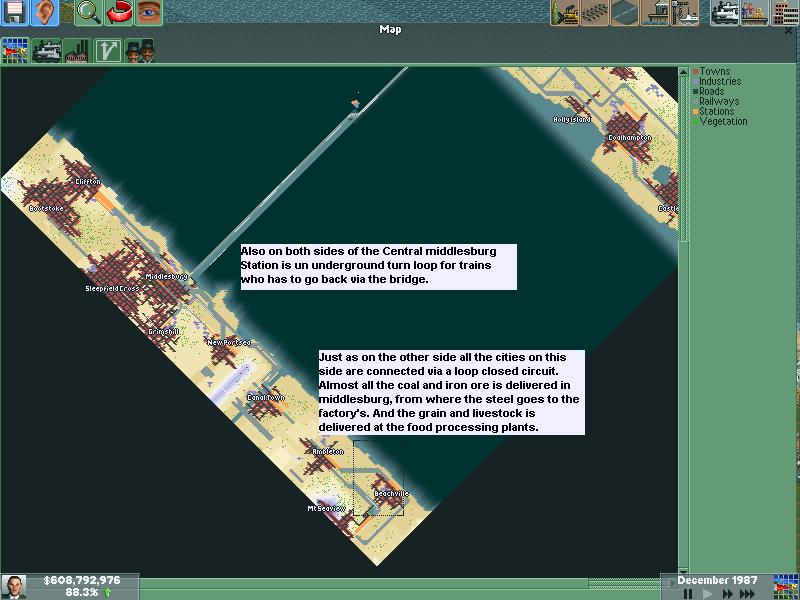 These screenshots are very tempting. I'll download it.
Nick - Creator of the virtual railroading review series:

you're right, the first screens of the scenario where really goog looking, but to build it as far as did until now took me about a week.

And i use really all kind of trains. Some from the Dutch NS and NL pack, some DB, some OBB, some SBB and lots of US and Amtrak.

I never use computer AI, because the AI is really dumb. I tried it out once with 14 compitors against me. I didn't do anything in that game but i don't get the logic of the computer. I mean the way they lay on tracks and roads terrible...

Here I got 1 final example of a "Main Load Station" with extra platforms and continuing lines. 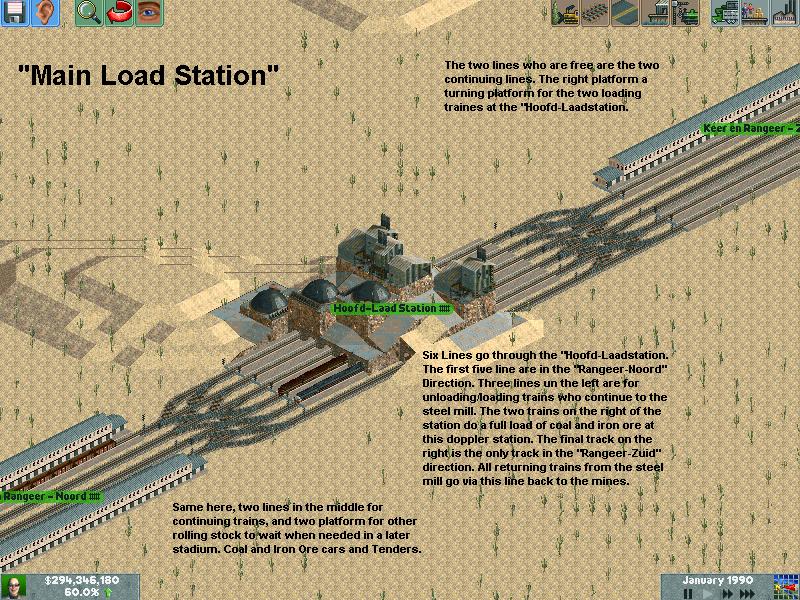 Nice screens, thanks. I like seeing people enjoying my work

fun map, but very hard to get enough income to get rid of loan quickly

Hmm, i will give this one a try too; but then with airbridges

I will refuse to use mega bridges.

:: Looking for the Locomotion section? Scroll down on the forum index or click here. :: See all releases in Locomotion section? Clicky here! :: Click here for the best tool ever! :: .datCrawler try it! ::
Following roadmap for releases: Whats a roadmap?
Releases of LocoTrains can be found by checking the posts of: LocoTrains - Goold old AMI Trains member of the first hour.
I have Private Messaging disabled, because of the stupid questions i get in my PM box.
Want to talk to me? Get on the #tycoon and #locomotion channel on OFTC thingy. :: Evolution of men: Loosing more braincells, everytime you post...

Ok, I gotto admid when I worked on the scenario in the editor i changed a few things and I got the money with the use of the pizza-trainer and all the vehicles in 1920 orso because I used the LocoMod.

But that is what I do with every scenario I build or download because I like to build those lines and can never wait to begin big time.