Hello everybody.
I have created a game intro where many of the patch features can be seen. Some of these include:

> high screen resolution (the old intro screen resulted too small for higher resolution presets, and there was a big empty place in the lower and right parts of the screen)
> higher bridges
> path based signalling
> multi headed trains
> allow more industries per town
> industries of the same type can be built near
> bigger stations
> mammoth trains
> more steam
... and maybe more

I did this using sv1codec by Marcin Grzegorczyk.
IMPORTANT NOTE ON THE USE OF THIS PROGRAM:

but it didn't work. Then, I realized that my savegames were not TRTxx.SV1 but TRPxx.SV1 (I think this is because of the usage of patch and not the original game)

No graphic sets, other than those used by the patch (electrified tracks, slopes...) were used, so that everybody should be able to install and use this Intro.

> WARNING: You must have at least Patch V. 2.0.1 alpha 41 to have this file working properly
> First of all, make a backup of your TITLE.DAT file found in the ttdx directory, for if any incompatibily would occur
> Download the TITLE.ZIP attached below in this post.
> Decompress the file, and move the file TITLE.DAT to the ttdx directory, over the old one.

Anybody that creates a new intro can post it in this thread; to be shared with everyone. Anybody ready to create a snow Xmas themed intro?
I'm sure you can do way better than I did, I used a rather simple scenario, because this is my first try.

That's it. I hope you like it. Please report if you experiment any problems with it.

SCR14.png
A screenshot of the new intro in high resolution; download to take a look at it
(229.02 KiB) Downloaded 2966 times

.
And i love how it uses all original TTD Things too.
Top

Hmm, My DBSetXL game would make a nice intro...

Thanks, Aegir! C'mon, give it a try and do also some DBset intro too!
I didn't use any graphic set to make it as much universal as possible; but intros with other sets would be great too (also with new stations, ships, Zimmlocks's TTRset, etc.)
I can't wait for the release of the Japan set (with full environment) to make a Japan themed intro

Mr. Jim Powers could also help with a nice intro with one of his awesome megalopolis using Zimmlock's buildings and US set trains
Top

We played with one featuring the US set, but I was never totally happy with it.

Also, the trouble with using new sets in the intro screen is that for them to work, the person has to HAVE the new sets, and I don't think there's a way to check.
Development Projects Site:
http://www.as-st.com/ttd
Japan, American Transition, Planeset, and Project Generic Stations available there
Top

In the case that someone makes a new intro file, please, in order to avoid the above mentioned problems, say exactly what GRF files where you using in the moment when you created it. Even if this is only a slight detail, it could create conflicts, or result in strange intros.
Top

I suppose it might be possible for the Patch to have some sort of check, where you'd register the start files with the Patch and say what GRF files are required, and then on startup, the Patch would make sure they're there, and if not, would substitute something else (maybe even the original screen).

But I'm not at all sure that would be worth the effort for what would be purely eye-candy.

It would be nice to see a start-screen using the PBS signals.

Maybe the start-screens could have their own Patch settings, separate from whatever settings were selected by the player?
Development Projects Site:
http://www.as-st.com/ttd
Japan, American Transition, Planeset, and Project Generic Stations available there
Top

hmm... nah, I don't think we need such a complex feature... I don't want the patch team to lose time in such a thing.

If the creators of intro files say correctly what GRFs were used, and in the other side the players take caution of having a backup of the original title.dat file; there will be no problem at all

I'd prefer a lot other things to be improved, like the desert creation in the map editor for the tropicla climate
Top

I have worked in a snow themed intro, since it is commonly linked with Christmas. I thought you'd like to see it:

For instructions, see the 1st post in this thread; the same apply

Nice, but there is allways critisism, isn't there ?

I think you also should show off

but there are a lot of buildings on slopes... in both of the files. Maybe you meant something else? However, I was indeed planning to do an intro with the canals.

The stations at different levels was a quite good point; thanks Rob! I thought that was from OTTD, now I realize that what's from OTTD is the stations not aligned.

I'll work on some other intro soon... any other suggestions like that are welcome! however, I'd like to see some work from others too
Top

and in the Arctic Climate intro there are no visible roads/railways; but most of the buildings are on slopes
Top

I was only talking about this wintertheme.
Buildings on slopes have allways been available in TT and TTD,
it's the building on slopes of roads and tracks that have been added.

Rob wrote:I was only talking about this wintertheme.
Buildings on slopes have allways been available in TT and TTD,
it's the building on slopes of roads and tracks that have been added.

aaah, understood now! actually at the beginning there was one, but the rail network didn't work; so I changed it.
However, I don't look for one intro showing everything. For example, in this arctic intro there are higher bridges much higher than the ones in the first one.

I'm thinking about a new intro with the features you mentioned... I'll show it when it's ready
Thanks for the feedback
Top

I'm trying to make TTO title screen, but I don't have a screen-shot of it. (if someone has it, please give it to me

Some screen-shots of my work, it's not ready yet. 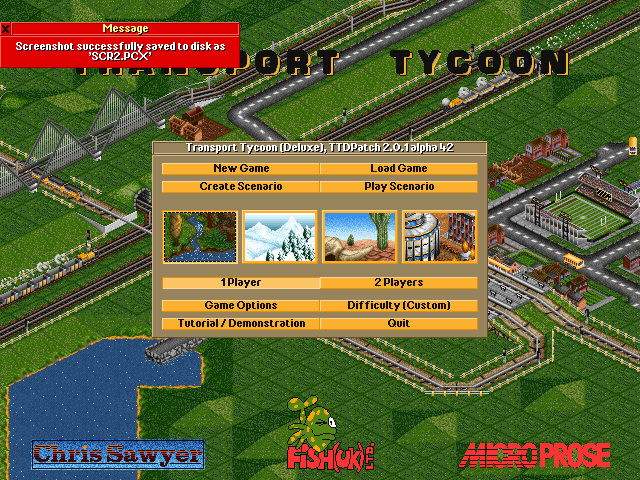 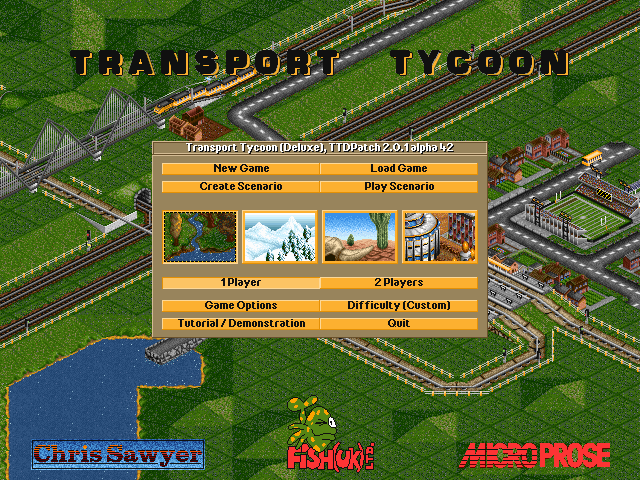 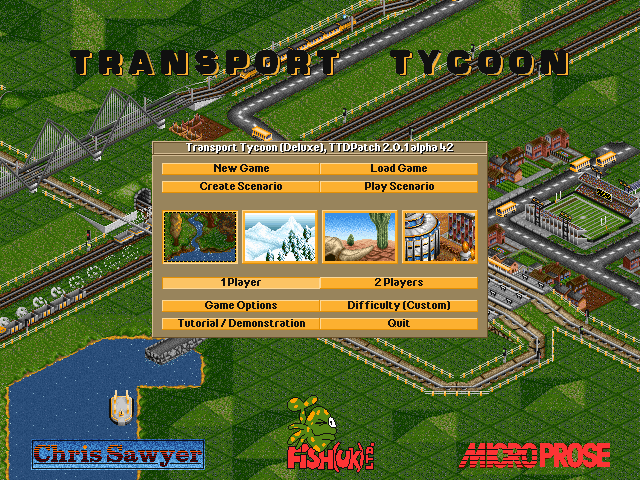 Jezulkim, it's nice to see more people interested in the new intros! go for it!

Some advice on your in-progress work:

> the landscape is too simple: it's quite plain, looks symetric, and there are no trees at all. Try adding some eye candy, you don't need additional GRF files, just add trees, lighthouses, rocks, etc.

>Also try making the terrain only a little bit more hilly, so that you can use higher/longer bridges. I actually don't like hilly terrain, but this is only for an intro screen, you must make it look interesting for people, so that they really would want to dowload and use it.

>Aren't you using high resolution? that will give you more space. The default game resolution is lilliputian for me now

>When you release it don't forget to mention which GRFs you used, and where to get them, to make it easier for players.

Compare the title screen to this: http://www.tt-ms.de/downloads/ttowe107023.gif 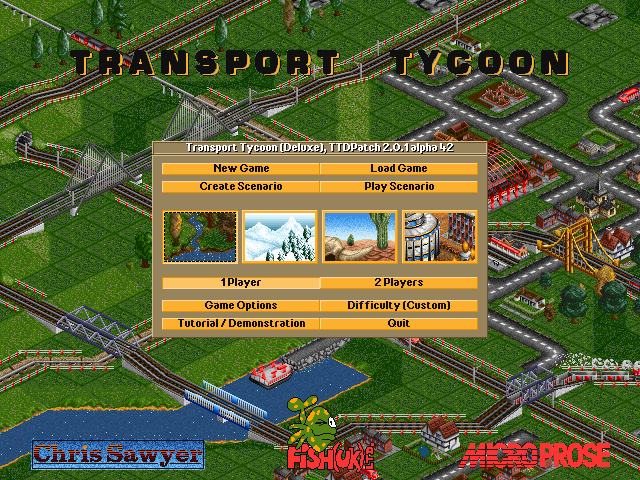 I think someone made a full conversion, even the buildings match, I think it's a quite old thread
<+Raichase> ugh, I just ate some of my beard D:
Top
Post Reply
59 posts