EDIT by Raichase: The railways of Australia are like the different nations in Europe. They are, of their own, independant nature, and although trains may cross the border, each state keeps a pretty strong showing of it's own trains, and only it's own trains. Combined with the difficulties of gauges, AU Set Leader Whitehand, has proposed to make this set a NSWGR set, which is probably the most famous of Australian railways. This would limit the set to NSWGR (New South Wales Government Railways) stock, as well as modern stock divided by private company (Freightcorp -> Pacific National, National Rail, etc).

Once the NSWGR componant is completed, there would then be the potential for "custom grfs" to be made, replacing NSWGR stock with stock from other states. Eg a Victorian Railways grf would replace most of the steamers with Victorian Steamers, ditto for the diesels, electrics, DMU's, EMU's, etc, while leaving the "national" trains the same, such as the National Rail trains. This would allow a common basis of freightcars, and "favorite" trains, but allow the set to be customised by the player from state to state.

So please, vote in the new poll and tell the team, so that they can help make the set something the community, and not just Australian members, can enjoy.

Thanks. [/edit by Raichase]
OK, It's official. This set is now the New South Wales rail set. However, feel free to continue voting.

Your asking for coders and artists right when resources are strung high.
Top

Akalamanaia wrote:Your asking for coders and artists right when resources are strung high.

Even though I fully agree, I don't think it would hurt to make plans for a set. I personally would love to see an Aussie set. Maybe even with some Aussie stations bridges(Sydney Harbour), buildings (Sydney Tower, the opera house) and even gum trees.

What about road trains! Now that would be interesting.
"Set fashion, not follow. Spit vitriol, not swallow" - Marilyn Manson
Top

There are plans already, but he is asking for graphics artists and coders, rather than asking for help in planning it.
Top

Yes, lately there are a lot of posts like "I want somebody to make --- "
If you want to initiate a project, put something from your own effort to have it working. This is not "Dear Santa Claus, this year I've been a good child and I want..."
Indeed, there is people who doesn't code or make graphics, but contribute help to the set by bringing data, profiles of vehicles, and even pictures if you can take them for the artists to have a good shot. You know, it's not so easy to find pics on the web with the right angle...

To all "requesters"; move your ass!! If you really want so much a set or a train to appear in any game, TTD, or LoMo, or whatever it is, do something active to help. If you can't, then please don't tease people asking like children do
Top

Well I for one thing don't have any art skill but I'vea lready complied a list of many good sites for pictures and specifications. I'm also planning a website and collecting resources for it also. It doesn't matter if you people out there aren't good at graphics. You can still be helpful in making sets!

Read Purno's graphic tutorial then, i am shure it will teach you a lesson how to do a carriage, or a train. Even i atleast bothered to do some work for my set other than co-ordinating it around, i done a few carriage fixes etc for the graphic artist.
Top

I've found A LOT of the QLD and NSW trains, but I think I've missed a few.
I will agree it looks pretty simple from the tut, but at some parts the tut tells u to add something, and in the pic i notice no difference. maybe it just my computers low brightness.
OT: Speaking of that, I have an old Compag Presario 2281 on XP. Anyone have a way to increase gamma correction. Ive tried but can't find anything.
Formerly known as Lachie
Top

I think this link might help
http://locofonic.alphalink.com.au/
I hope it's got the right info
<+Raichase> ugh, I just ate some of my beard D:
Top

OK. I've tried doing purnos ppaint tutorial and i can say in all seriousness, that i can NOT draw trains at all. I felt really frustrated when i was doing the drawing and the tutorial didn't tell me anything about what i was doing eg. the palette and the windows and all. I really didn't like the experience at all.
Formerly known as Lachie
Top

Everybody knows how to use paint, all the tutorial explains is how to draw a train pixel by pixel.
Top

Well i guess i don't

as some of you here (from the jap set) know i have already started an australian set, one problem is guages...eg. Queensland, Western Australia and South Australia use 3'6" gauge, Victoria and South Australia use 5'3" gauge, and New South Wales, Northern Territory, and South Australia use 4'8 1/2" gauge, this could be done with all three track type in ttd, but some vehicles would look out of gauge on some trains, so we would have to get it right the first time. I think the best way would be for to break up 3 groups and those in that group work on the same gauge. For those of you who haven't seen my work please visit te japset forum and take a look.
Top

ttdArtist, I think it's okay to post again the pics here. It's better than having people lost around the Japan set topic looking for them.
Post them here, so that everyone easily can see them (because they are quite good, and we do want people to see them

)
I don't think that's a problem; however moderators have the last word...
Top 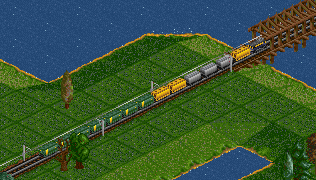 Dude, those are really good

I just saw the thing about the Spirit Of Progress in the Japan set thread
Here's 2 pictures of them for you
I can't use [img] tags cause they're large images
http://locofonic.alphalink.com.au/pix2/spirt3.jpg
http://www.nex.net.au/users/reidgck/S-STEAM2.JPG

Also, can we include this train?
http://locofonic.alphalink.com.au/pix2/terowiex.jpg
<+Raichase> ugh, I just ate some of my beard D:
Top

Heres an XPT in the Countrylink livery that I drew a while ago. Some have probably already seen it, but I'll put it here anyway for posterity.

If you want to see it ingame

please use email instead of PM
Top

i'll put my XPT sprites in a single pic for you to repaint in countrylink colours and add it too this msg. and singaporekid... the train you wanted is a SAR 520-Class 4-8-4...Built: 1943, Max Speed: 112kph Weight: 204.5t Tractive Effort: 145kN Gauge: 1600mm (5'3") Broad Gauge Horse Power: ???...main opperating area was between Adeliade and Port Pirie(where A LOT of Ore Concentrate rains come from)... also can someone do a NSWGR AD60 Garratt ? Maybe use the Garratt from the Tropic Set as a starting point?~!