OpenGFX Graphics Replacement Project
This topic is intended for all GPL releases of OpenGFX. Please use this topic for release-related things and bugreports only. Development related things should go here.


Latest Release
Preferentially get OpenGFX via ingame content download. You'll find it in the section "base graphics" which can only be accessed from the main menu's online content. Additionally, releases are also available for download at:
Stable>>>http://bundles.openttdcoop.org/opengfx/releases/<<<

Nightly Builds
Every evening around 18:18 CEST a new build of OpenGFX is created automatically (if there's something new that is). Unlike stable releases these builds aren't tested to see if they work, but if a nightly doesn't work, it doesn't break anything either. Keep a stable or working nightly sitting in the /data dir and just delete a broken nightly to get OpenGFX working again.
Nightly>>>http://bundles.openttdcoop.org/opengfx/nightlies/<<<


Information
OpenGFX is licensed under the General Public License version 2.0.

Everything else you need to know is available in the OpenGFX Readme. Read that first before asking for help in this topic.

Some sprites are still missing from the current release. Missing graphics will show up as black rectangles in the game (as shown in the screenshot below). Please do not report those rectangles as bugs, they're features. If you think you've found a bug, please check if it has been reported already in the Issue Tracker. If not, either add a description of the bug there or in this topic. 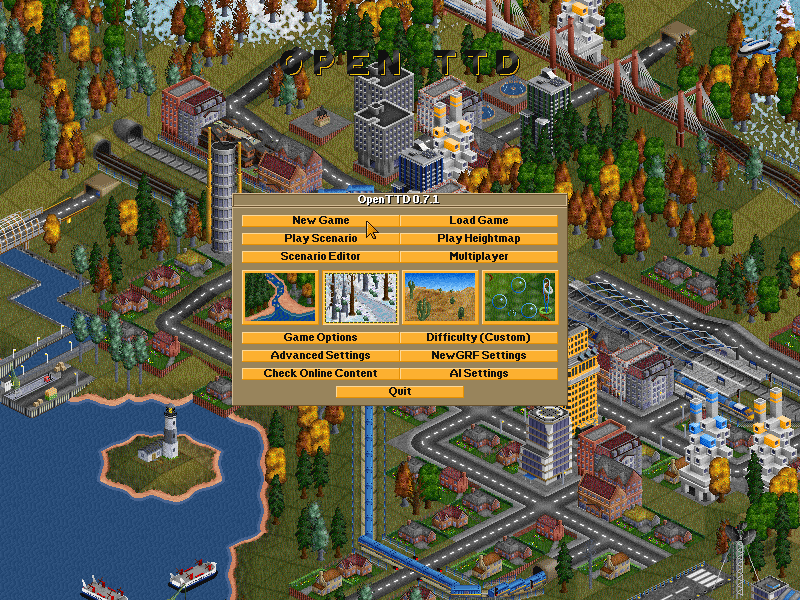 I just finished the very first GPL release of the OpenGFX replacement set. For that occasion I decided to open a brand new topic; that way we can development and distribution related issues seperated.

Some of you might remember that I started saying "you can expect the very first GPL release within the next few days". Those days turned out to be weeks because working on getting everything together in it's final format revealed all those small things which I valued to be necessary to be added to the set before releasing it. Amongst those small things were things like the owned land sign, finishing the docks, adding the streetlights, drawing the autorail sprites, drawing some new one-way road sprites and the like.
With those things out of the way, I think I came up with a release worth releasing.

And because I'm having dinner now, I'm going to finish this post right after that

Oh yes, since toyland is far from complete, I did not bother to include every toyland related sprite we currently have available; that will be done in one of the future versions. The other three climates are largely done; the general things missing are a bunch of buildings, the monolev enginges and -wagons and the African manager faces.

Looking forward to it!

congratulations to everyone involved in this project...
Ps: sorry if any mispelled words, but writing this in iphone is pretty hard..
Top

This is a big day in the history of OTTD.
Top

Than you very much for this effort !
I am trying to run openttd without non-GPL files using your alpha package, and got bitten by the

message. A quick find shows that this file is nowhere to be found and is actually part of the original game files. What is this file for ? Is there a free-as-in-speech version of it ? Is it really required ? Is there an initiative to get a GPL version of it ?
I really look forward having a complete playable openttd package in most Linux distros.
Cheers !
Top

Congratulations! A few more sprites to go and BOOM!

I'm proud to announce a new release, only two days after the previous. This new release features a few bugfixes and a bunch of new graphics. For more information see the changelog below. This new release is really worth upgrading because it adds those small things missing from Alpha 1.0. All those small additions make this release a new milestone: there's only three things needed to complete the 'normal' climates: the african manager faces, the monolev vehicles and a bunch of buildings. All other sprites are finished for those climates!

Yay, smoke ! Thank you, that was the most annoying thing in the game...
Top

Really amazing how far this has come

big thanks to all people who made this possible

its more random and not as pro as the Openttd Coop guys.
Top

@belugas:
That's quite common for people who switch from the default to the OpenGFX, but I've experienced that you'll get used to that quite quickly. The terrain is a few shades darker than the TTD terrain; and because terrain is everywhere it makes everything look darker. Go ahead and play with OpenGFX for a few hours and see for yourself.
Or change your display brightness setting

Well, it's a dirty job, but someone has to do it

Edit: Wrong thread (was regarding fonts, which have been changed now anyway)
Last edited by buttercup on 01 Jan 2009 20:14, edited 2 times in total.
Top

I've searched forum if it was reported before in any OpenGFX related thread, and I didn't find, so I report it here:

Maybe it was intended, but IMO it should look something alike that from original graphics set: