This AI is part of a collection of test AI's written with the intention of training and improving our main AI: rondje (Rondje om de kerk, winner of the TJIP challenge 2008. See seperate post on that.).

OtviAI was previously a collection of a few testing AI's but it's now all merged into one code base.

It's mainly passenger and mail, but it will do the occasional cargo route. It's tested with various newgrf's like ECS, FIRS, 2CC etc.

All our code is released under GPL v2, we already made our profit by winning the TJIP challenge anyway

Comments and suggestions are always welcome, just post them here or use the email address provided in the README's in the tar files.

The AI can be find with the 'find online content' within OpenTTD and there's a downloadable copy attached to this post.

Nice, I don't have time to look at it now, but I'll do some testing later this week.


Maninthebox wrote:All our code is released under GPL v3, we already made our profit by winning the TJIP challenge anyway

OpenTTD is released under GPL v2, so if you want your code to be reusable in an AI that gets included in OpenTTD, you might consider releasing it under GPL v2.
Top

I'll change the uploaded files in the start post soon

Eager to try it out, however, it doesn't show up when I type list_ai (yes, it's placed in the right folder along with other AI's that do show up). Have I missed something... Maybe it's a problem with the licence?? (just kidding

They f*** up packing the tar, like most people do

They seem to think it is a good idea to omit 'dirs', while our system depends on it. Most linux 'tar's do this correct, but most GUI based ones don't ...

Either way, here are the tars in their form which OpenTTD understands.

)
The only thing necessary for the triumph of evil is for good men to do nothing.
Top

I actually did use a linux tar, but I did a rather manual tarring with a find on *.nut to prevent packing all the subversion files in the tar, I'll try to remember to add the directories to it next time. Better yet... I'll make it a Makefile target

Thanks for the retarring anyway

Changed the GPL version to version 2 (in the post, the COPYING and each and every source file). Also changed the way the tarballs are created: new: now WITH directory structure

I was going to try to compare some AI's but the latest NoAI binary doesn't load OtviAI (or the other ones in this thread).
Top

Hmmmm... I verified this with the lastest subversion version and it does fail to load the tarred version. I forgot to include the top level directory in the tarball. Adding this solves the problem of loading the tar, but leads to a new problem:

It almost looks like the tar loader can't handle '..' in filenames anymore?

Unpacking the tarball (I think winrar can do this for windows users) solves the problem for now.
OtviAI
Rondje om de kerk (AI)

Tried it with some other AI's for a few years and there were some things I noticed:
- OtviAI builds drive-through stops for mail but only connects one side of it. This looks a bit awkward.
- Builds a lot of unnecessary road, if cities are already connected OtviAI 'often' builds extra road which isn't significantly faster. (Esthetics are important for me in an OpenTTD AI

Other than that, it's very active in connecting cities and that's very nice IMO!
Top

Updated all three AI's to reflect changes in road API. Tarballs are in the first post

Updated OtviAI (others aren't updated yet) to reflect all the latest greatest API changes. Also fixes bug with too large boundaries on checking for new cities to connect after a few years.
OtviAI
Rondje om de kerk (AI)

So finally *.openttd.org came online again and I finnaly could download your AI from bananas. (hmm, man is stupid, I could just have downloaded it from here..

However I got some errors, see attached image. So I restarted OpenTTD incase it was a cacheproblem, but same result. Second thing I did was to unpack the tar file and move the tar-file out of searched path. This solved the errors.

Third thing I tested was to make a tar using 7zip. Exactly the same way as I made my own tars and with my own tars. And with this tar I got the same problems as with the tar I downloaded from BaNaNaS.
My OpenTTD contributions (AIs, Game Scripts, patches, OpenTTD Auto Updater, and some sprites)
Junctioneer (a traffic intersection simulator)
Top

I have the same problem here, it is caused by this line in roadfinder.nut:

OpenTTD seems to fail on the "../" in that path, for now it can be circumvented by removing the require from roadfinder.nut and adding

Just to be clear: using ".." in the path when your files are inside a tar is not and will not be supported by OpenTTD
Top

Tar and I are not on speaking terms anymore

Anyhow... changed directory structure to avoid having to use '..' in pathnames, also changed tar packaging again. New version available via online content system and in the first post (note: only OtviAI.tar is up to date at the moment, repackaging others as soon as main version is problem free

Maninthebox: can you start using integer versions (ie not 1.3)? OpenTTD reads the version from info.nut as integer, so both 1.3 and 1.4 of OtviAI register to openttd as version 1, which might give problems with loading the correct version for savegames and such.
Top

Hmmm... guess I'll better stop the whole dual versioning then and just use the svn version. Now if only I could automagically put that number in my info.nut on the right spot... think I need to script something 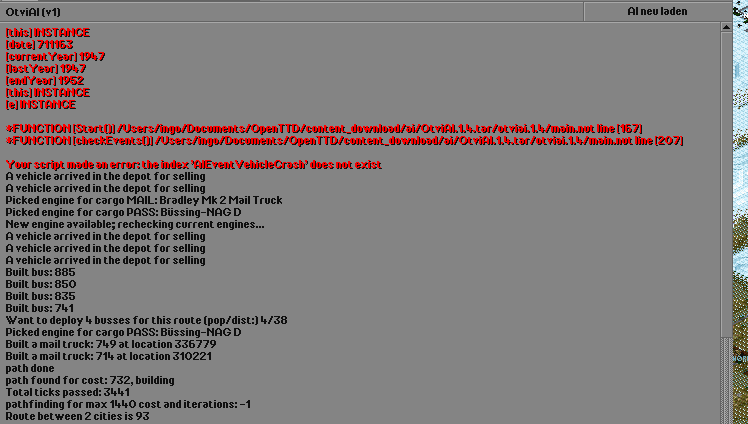