Pictures of your games (non-OT thread)

Screenshots of your games! All Transport Tycoon games acceptable (including TTDPatch and OpenTTD).
Locked
8318 posts

Another shot of steam motive powah from the NSW Set. Working from left to right, you've got 3605 with a western line train, 3606 in green hauling the overnight mail to Tooreeba and on to Cabee, 3219 with the Bambaloo branch line train, and 3222 with an afternoon commuter service.

Thats a lot of steam!

Can i ask? Where did you guys get those visuals?
I'm sry of my english.
Top

A coal train overtakes a BR05 near Beburg Springs. 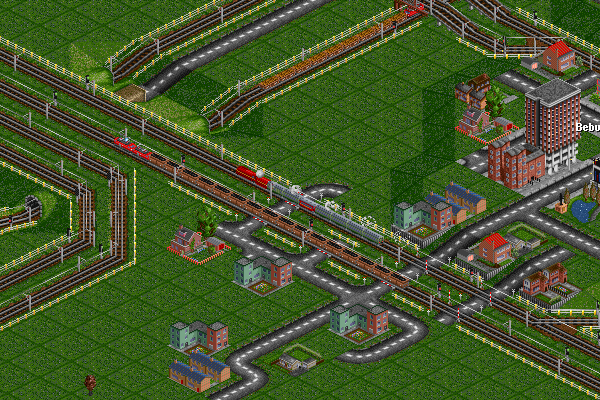 alone wolf wrote:Can i ask? Where did you guys get those visuals?
I'm sry of my english.

The graphics in my shots are undergoing closed beta testing, and are not avaliable for download. A number of graphics can be found on the ttdpatch website, or grfcrawler.
Posted by Raichase. Visit my Flickr! Gallery, Blog (get a feed of everyone at once at Planet TT-Forums).
Raichase - Perfect timing, all the time: [13:37] * Now talking in #tycoon

Nice pictures..I have no pictures of this game..I'm just suck in this game

I love TTD, Thank you Chris for this wonderful game

My shot for today shows brand new 3801, the first in it's class, passing an interurban service. It's a bit of a happy time for everyone. The war is over, and everything is getting back to normal. 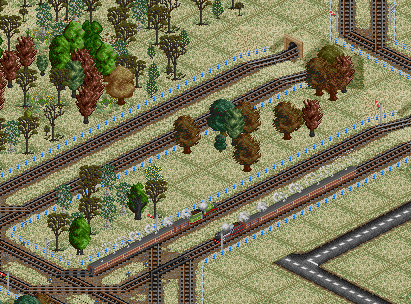 I just noticed this, and thought it rather cool - suburbs, TTD style. I've never seen a proper residential area like this before

Raichase wrote:I just noticed this, and thought it rather cool - suburbs, TTD style. I've never seen a proper residential area like this before

I get lots of those and when I am playing a DBSetXL game I use the BR420 to run a commuter service, fantasic acceleration, an acceptable speed and huge capacity (as well as fast loading times) make it perfect for this type of service, I will post a picture of it at some stage.

I've been getting the occasional suburban area such as that in my savegames, they kinda crop up more often when your buildings have minimum lifetimes ranging from 5 to 20 years, city centres and suburban areas tend to grow much nicer

A testscreenie of TTRS version 3.

My cities are slowly but certainly being converted to modern times.
At last, was about time too. The people were starting to get sick of those old buildings, which isn't at all difficult to understand.
You would be sick too if you had to live in a building for more then 4000 years.

Nice use of canals

Which road set do you use?

Rob wrote:They come with TTRS version 3.
There are several roadsets for different times, they are growing with age so to say.

The train tunnels aren't from TTRS version 3, but from those great Czech guys.
(looks better without rails above it, yours looks better with rails but until TTDPatch does select this automagically I'll use these)


Captain Kirk wrote:Ah, it looks nice, when is it released? (Or is it?)

It's in testing to sort out some of the bugs, if any.
If the testing is finished it will be released.
Wie zich gelukkig voelt met het geluk van anderen, bezit een rijkdom zonder grenzen. (F.Daels)

I've locked this thread, but kept it sticky as it's got a lot of old stuff here. For new screenshots, please post your own threads, as mentioned in the forum guidelines.