And thus we find a flaw in a great man.
Official TT-Dave Fan Club

Andrex wrote:Note that allowing this version to update itselft will return it to current 2.8.5 version. The next public version will be 2.8.7.

DaleStan wrote: I went to test TTDXC 2.8.6 -- I put it in my TTD folder, and ran it, and it quite helpfully said "Unable to create switches.xml info file. TTDXC will download the info file for TTDPatch 2.0 rev 1 now."

I'm not quite sure what it's smoking there, because it didn't even *try* to start ttdpatchw.exe (I know this because my firewall allerts me when unknown programs try to start other programs.) Had it done so, TTDPatch would have done as TTDXC requested, and generated a proper XML file. (This was verified by running ttdpatchw -!S- from a command line.)

If I manually generate switches.xml, TTDXC deletes it and then reports that switches.xml couldn't be generated, as above.

That's related to a version detection problem. You didn't mention how does TTDXC detect your TTDP version at all, that would be helpful.

If TTDXC does not create the XML, it's because the TTDP exe filesize corresponds to an old version without XML, and therefore it will download the one for 2.0 rev 1 for backwards compatibility. Now, I recently changed the function that retrieves file sizes with one native VB function, it seems that wasn't a good idea.

Here I attach a new TTDXC 2.8.6 version which uses the system's GetFileSize API to query file size. Also, the existant switches.xml won't be deleted it TTDXC cannot run the version detection, so switches will be created using the local XML even if version detection fails.

Oh.
That's all I can say based on the extensive info your provided. I won't start with the correct bug report speech, but you could at least mention what the heck happened when you received the new version notification after Live Update.
Last edited by Andrex on 29 Oct 2006 17:16, edited 1 time in total.
OpenTTD Manager | TTDX Configurator | GRF Wizard | NFO Editor
Top

Andrex wrote:If TTDXC does not create the XML, it's because the TTDP exe filesize corresponds to an old version without XML,

Oh. Then using GetFileSize won't work either; my local builds are all in the 300KB range (+/- 15KB, depending on DOS vs Win and how much version information is included), because I've configured the build process to compile the minimum of language data.

There's probably an API somewhere for reading the PE header; checking that would be substantially more reliable than checking size for the Windows version, but it would be useless for the DOS version.
For both versions, it should be possible to read the attachments and use that information:
1) If a lOADcODE attachment appears, this is a recent version, generate the XML
2) Otherwise, read the pROTcODE attachment and use the protcode size to determine whether or not to generate the XML.
Procedure: Read the dword immediately following the pROTcODE tag (in 2.0r1 DOS, that's 252 (dec) at offset 0x285C3), add four, skip that many bytes (counting from the end of the just-read dword), and read the following dword (in 2.0r1 DOS, that's 65579 (dec) at offset 0x286C7. In 2.0r1 Win, those values are 404 at 0x281C3 and 67535 at 0x2835F.
To get a good answer, ask a Smart Question. Similarly, if you want a bug fixed, write a Useful Bug Report. No TTDPatch crashlog? Then follow directions.
Projects: NFORenum (download) | PlaneSet (Website) | grfcodec (download) | grfdebug.log parser
Top

What about starting TTDPACH with the v+ switch? And fall back to the file size variant if v+ doesn't produce the expected response?

Actually, I would think -!T+ would be more interesting.

I expect these are of interest: Clean builds of trunk, except with my changes to omit the non-English strings. (Using lang/english.exe to generate language.dat, instead of makelang.exe)

AndersI wrote:What about starting TTDPACH with the v+ switch? And fall back to the file size variant if v+ doesn't produce the expected response?

DaleStan wrote:Actually, I would think -!T+ would be more interesting.

On versions which don't support them this would cause TTDPatch to start up normally (waiting for a key and/or going directly to TTD), which is probably not an acceptable behaviour.
Josef Drexler

That's why I used the file size trick. Using the PE header is very complex with VB, but I could add an option to force the creation of the XML for cases like that.
OpenTTD Manager | TTDX Configurator | GRF Wizard | NFO Editor
Top

Oh.
That's all I can say based on the extensive info your provided. I won't start with the correct bug report speech, but you could at least mention what the heck happened when you received the new version notification after Live Update.

Update to version 2.8.5 lets my virusscan stop the proces.
He finds a trojanhorse malware in one of the files and breaks the installation.

Is the file infected or do i have to cirkel around my scanner?
Top

Whatever version other than 2.8.5 should update to this one, because it's the one on the server. And my updated Kaspersky AV never complained on it, so it's virus-free guaranteed.
OpenTTD Manager | TTDX Configurator | GRF Wizard | NFO Editor
Top

Gonna do it by going round my virus scan.
Top

AVG have no problem with configurator 2.8.6., too.

TTDXC 2.8.7 has been released. The changelog is here as usual. For bug reports, please provide as much info as you can, including TTDP version, operating system, local weather, and so on.
OpenTTD Manager | TTDX Configurator | GRF Wizard | NFO Editor
Top

I have an interesting problem with TTDXC 2.8.7. I have just downloaded the latest file from the TTDXC webstie and installed on a new computer (no previous TTDXC was installed). When TTDXC is running, all the screen text is english but when I mouse over the settings, the info text in the status window is spanish. If I change the TTDXC language (say to french), I get french text but the status bar info text is still spanish? Also, when I click on an option which has a popup window (like plant more trees) the popup options are in spanish. 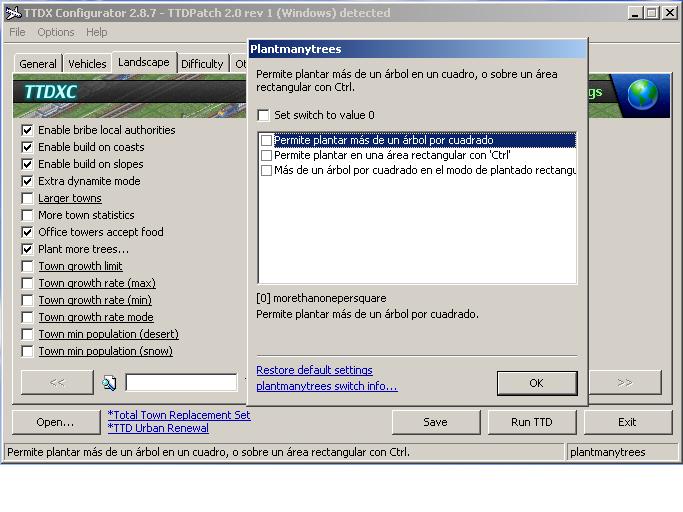 The language of the switches and their descriptions is what TTDPatch determines to be your system language, since they're the output of TTDPatch.

Unless TTDXC instructs TTDPatch to write them in a different language; I don't know if it does that.
Josef Drexler

Patchman wrote:The language of the switches and their descriptions is what TTDPatch determines to be your system language, since they're the output of TTDPatch.

That does not apply for his version, TTDPatch 2.0 rev 1, because it doesn't have XML data.

Since TTDXC requires an XML mandatorily to work, I provided an XML with 2.0 rev 1 switches to use with versions without XML support. But I didn't notice that I was using the spanish file.

I have just uploaded the file in english. Go to your windows\temp\ttdxc folder and delete 20rev1.xml. Start TTDXC and it will retrieve the new XML in english.
OpenTTD Manager | TTDX Configurator | GRF Wizard | NFO Editor
Top
Post Reply
540 posts