Thanks Dalestan, your help is always welcome here.
I had known that % is modulo (from C and C++) before, my problem was that I didn't understand how to code it (I'm so stupid...

Thanks Sunchimaru for the information, I've just tested my work that I did and it's work perfect. I think I'll finish the wagons tomorrow.
Death

Great! by the way, I updated the file a bit more. I added some ending year dates for engines, and some mass for steam locomotives. I also updated an inconsistency error in the 316 diesel "Marilyn" liveries, where the livery change would took place 15 years before the release of the engine...

OK, I've just finished to code the LDs. please tell me whether it's correct, as I put the liveries.
Death

There was a little bit of confusion, sorry.
First of all, krtaylor, can you please update the tracking table using the sprites in the attached file?
I think it is better to put the freight, passenger and mail cars apart from the engines, so that they can be found faster. Also as they are now, there are some liveries mixed where they don't belong (for passenger cars)
If it's not clear what are the ones, ask and I'll tell you with detail which ones.

Death: use the sprites in this ZIP to code. The distribution of liveries goes as noted in the scheme at the beginning of the tracking table. Only 2 remarks:

Actually, I'm afraid I can't do any updates at the moment. I moved, and don't have direct access to my servers which will work with my tools. I'm trying to set up a VPN, but haven't been able to quite yet. Maybe I will get lucky and it will work tonight... I do expect it'll work before too long though, and then I'll update everything. Don't worry, I'm still around, and paying attention.
Development Projects Site:
http://www.as-st.com/ttd
Japan, American Transition, Planeset, and Project Generic Stations available there
Top

Nevermind, whenever you have the time, off course

Sanchimaru, what about this (attatchment)?
Death

OH YES! superb work, Death! We got the 2 passenger cars in the game!! with the capacities and everything

Upon testing the file, I could only come with these bugs:
> in the purchause list, they don't change appearance with time. They should be shown according to their look. Also keep in mind that for the long distance car, the sprite for showing in the purchause window is the 2nd one in the file (normal car) not the first one (dining car)
> the 3rd age long distance cars have a graphic glitch in \ view; where a white bar is shown.
appart from passenger cars:
> 273 cocodrilo, in the first age has 2 different halves: one blue, one green, instead of being blue.

And that's all about bugs!

As for the progress, 3 points:
-Do you dare to include the mail car in the next release? you don't need to mess yet with the "baggage" cargo; just code it as a regular mail car. Since the liveries are the same for regional and long distance; you won't find many problems with it

-include the 030 steamer so that we can have a train since the beginning of the game. I have updated the Excel file, I hope the basic data needed for it is correct. Basicaly it's:
Name: 030 "Perruca" (not cockerill)
speed: 45km/h
weight: 64.7
-That and removing all the original game engines, leaving only the freight cars. If you manage these 3 and release such a file; we can make an official taster release

With this still the GRF will be far from complete, but we will have a fairly nice taste version

Sanchimaru wrote:OH YES! superb work, Death! We got the 2 passenger cars in the game!! with the capacities and everything

Almost everything. the have the defult weight, not the correct weight. the mail coach has the max speed limit, since you've not written me the limit in the cars.txt

about the freight wagons - shall I code them, or it will be better that I'll wait untill we'll have a new cargo?

The bugs are fixed

Sanchimaru wrote:As for the progress, 3 points: ...

I have no words... your work is excellent, Death! Thanks you a lot!

I will check the freight cars available at the moment and I'll tell you which ones we can already release. I am pretty sure the tankers are ready! I'll tell you about it later.

With this we already have an "official" taster ready!

Awesome work Death! I shall have a play with this right away!

Thanks! but it just a taster.
Death

I just added your set to my long list of sets. I love the animation of the steam
engines. Now that really impressed me. Hopefully you can add the steam
sound like they just put in the PB-Mini set. AnyWay Really Like The Set

I thought about steam sounds too...
I don't know the PB-mini set and I don't know which sounds are there,
but if we talk about the sounds while riding ("chik-chik-chik"), I think we should better forget it. Think about a huge junction with a lot of steam engines, it would slow down the game speed because the computer would have to give the sounds to each locomative, and second, I don't think the computer would be able to give the sounds without stammers if there would be to mach engines.
Death

I'm pretty sure sound is played in a separate thread, at least on the Windows version. If it gets behind, well, it can just skip forward until it's caught up again. And playing wav files is not particularly expensive AIUI. The expensive bits are drawing all those vehicles and smoke puffs and figuring out where they all go.
To get a good answer, ask a Smart Question. Similarly, if you want a bug fixed, write a Useful Bug Report. No TTDPatch crashlog? Then follow directions.
Projects: NFORenum (download) | PlaneSet (Website) | grfcodec (download) | grfdebug.log parser
Top

Hmm... I'll try to look for some.
However, help will be highly appreciated here! if any user has a source for spanish rolling stock sounds, that would be a good point to be added to the set

Your tracking table mentoined this train as requested... 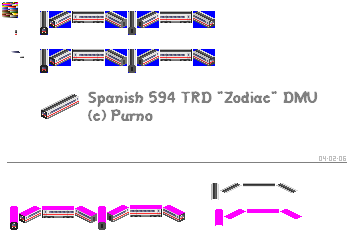 Incredible! Thanks a lot for that one, Purno

Glad to see you riding again, I hope to see more collaborations!

Hurrah for Purno! He's coming again with his great artwork!