Nice work Coalroads! Guess this means I ned to update the website again. Been neglecting it a bit lately.

Tanktainers eh? I've been meaning to draw some of those up. Mind if I borrow those for the intermodal cars for the Canadian and Finnish train sets?

Containers are looking good (I like the toll one, thats VERY nicely done), but perhaps some alternate shading, to show the ribs in the container better? Regardless, a little more shading on them would go a long way.

That being said, as is they are bloody marvelous!
Posted by Raichase. Visit my Flickr! Gallery, Blog (get a feed of everyone at once at Planet TT-Forums).
Raichase - Perfect timing, all the time: [13:37] * Now talking in #tycoon

Finally updated my Single-Deck Electrics sprites to be in the original NSWGR livery of introduction...

I was going to go with the yellow stripe above the windows too, but it made the trains look WAY too yellow, especially on the diagonals. Hopefully these sprites capture the whole appearance of the trains, without actually being 100% accurate.

Please also note that "B-Set" is just a working name for the graphics. I've got to do some reasearch to see which Single-Deck suburban set would be the ideal one to use. I'm leaning towards the "H-Set" (which is a bit problematic with naming, as Cityrail is RE-USING the "H-Set" class for the new OSCAR Inter-urban EMU's), or the "B-Set".

At any rate, these will be introduced VERY early in game, and will be the premier commuter trains on everyones network (supplimented with steamers and single-deck wooden coaches, o/c), until the Tullochs arrive (I'm considering doing graphics for the tulloch DD motor coaches actually, even though they didn't live for long).

When Whitehand returns, we should have a discussion about coaches too. I'm in favour of an idea similar to the DB Set, with the local and long distance coaches, or something similar.

The problem is, the double-decker issue. I wouldn't be comfortable having 4 veh-ID's used up on only coaches, so perhaps we can work something out with wagonovveride?

At any rate, the current suburban scheme (as I see it, feel free to jump in and change it) is as follows:

Obviously, before 1970's and the XPT, the Steamers and Diesels had a monopoly on un-electrified intercity routes.

Now, this scehem doesn't touch on the steamers and the diesels, but you can see where they would fit in:

1921 - 1940:
Steamers on all Intercity/Interurban routes, as well as some commuter trains. CPH's on rural routes, and B-Sets/Tank Engines on suburban routes.

1940 - 1965:
Steamers/Diesels on Inter-city/Interurban routes. Some diesels on commuter, but not many (I think the suburban electrics were running properly by this stage). SD electrics on commuter routes, until Tulloch DD's. Do we have a rural DMU for this stage? Perhaps the 600/700?

1965 - 1990:
Some steamers, but mostly diesels on Inter-city routes. All commuter trains would be SD with DD's becoming more popular. SD electrics, then the DD electrics on inter-urbans. 620/720 and later also the Endeavours on local non-electrified lines.

Does that make sense? It's very rough, brainstorming, but hopefully we can get some ideas sorted when WH has come back.

Finally, Coalroads? I'm doing some coding of the commuter stock, for WH to include in the AU Set when it's ready. Would you mind if I coded some of your DMU's (If I can dig up the sprites), to help practice? Heck, if they are already in the AU Set, I needent bother.

EDIT: Updated this post with the B-Set in the really-ugly blue/white scheme it used between 1972 and 1976. God awfull, but at least it breaks up all the red colours

EDIT (again): I just remembered that the S-Set debuted in this blue-white livery, and I believe the front of the V-Sets wore it when they were introduced too. Most of them were re-painted, as well as all of the S-Sets (thank god), but there are still some V-Sets wandering around in the "Blue Goose".

EDIT (gah): Note that the parcels vans are never repainted in great numbers other than the original brown. I can't remember any of them being in the final, Indian Red livery, nor in the... Blue/White one... Good thing too...

EDIT (Yes, again, someone bloody well post or summat): Just finished the Tulloch Motor sprites, as well as revising the trailer coach to wear the original livery, and the blue/white livery. The Indian Red livery I posted to go with the Indian Red Single-Decker sprites doesn't work properly, nether do the Indian Red Single Decker Sprites. Apparently, the darker two colours I used for shading are actually action colours for some reason, as they flash a lot. So, I've got to find another set of red's in the TT palette to sub in as Indian Red

EDIT (Talking to myself, so it seems): Updated the tullochs again. Finally found some colours for the Indian Red scheme that didn't make my eyes bleed. 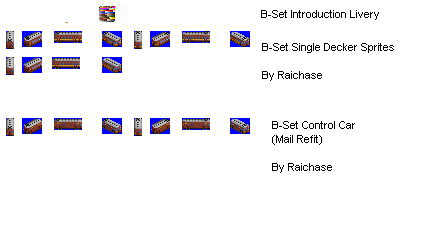 Finally, the Indian Red sprites for the Single-Decker Set.

I'm coding all of these trains as you read this...

I am very busy at the moment but have managed to wip something up before i go away for a while.I have thought of local and regional coaches.
coaches
dogboxes-1920-all
pullman-reg-1923 something
type R-1925 reg
FO-local
fs/bs-reg-1930
fo-still local
HUB set-1940-reg
fo-local
stainless steel sets (eg SA)-1960
fs/bs-local tuscan
candy RUB-1984
fs/bs-local candy
indian pac/ghan-reg-when i don't know were they should come in
as they were around in the 1970s,maybey we have them as just new service.
Here is the RUB set in candy finnished with power van.
Great work Raichase with urban stock

Danmack:you can use the tanktainers on those great wagon sets! 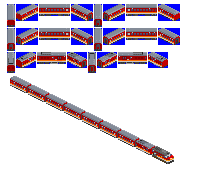 Oh, thank god for you Coalroads. I have been coding the passenger coaches for the AU Set, and I was looking for these. Currently it's a very simply scheme, done just to be playable...

Indian Pacific and Ghan coaches can be done via wagon ovveride... as to the rest of the coaches, I was thinking a nice simple scheme for them, using NSWGR coaches for the "normal" coaches, with wagonovverides for any trains from other states, as well as locos with normal coaches.

Any other sprites you want to drop off before you go?

Also, I have attached a grf that adds a passenger coach to the AU Set, to hopefully make it more playable. Windows version only for now...

Hey peoples, just wanted to give a quick G'Day to alert you all that I've returned from my absence.
WhiteHand
Top

it looks so real too

Has much be done on the set recently? It seemed to be going at an unstoppable pace and then nothing

I hope it doesn't die, i would love to see it finsihed with the Australian landscape/buildings, might be just the thing to pull me back from X3 (loving 1.3) and BF2+SF.
Top

It's the holiday season, and as far as I know, coalroads is away on holidays, and Raichase is busy. So our artists are busy

Yes, just having a bit of downtime. I would like to go back and resize a lot of my work to fit to Coalroads established sizes, to make the set seem more unified, but I would also like to finish this tram set first.

Also, recently there has been a death in the family, so I've not really felt like working recently. However, life goes on, and this set won't die until you pry it out of my cold, dead hands.
Posted by Raichase. Visit my Flickr! Gallery, Blog (get a feed of everyone at once at Planet TT-Forums).
Raichase - Perfect timing, all the time: [13:37] * Now talking in #tycoon

That blue turns into transparent blue in game.

Also, your signature is too long. Please remove that banner.
Posted by Raichase. Visit my Flickr! Gallery, Blog (get a feed of everyone at once at Planet TT-Forums).
Raichase - Perfect timing, all the time: [13:37] * Now talking in #tycoon

.I have been busy the last two days though with nearly all container loads finnished (20ft,40/48ft).
Raichase, careful with resizing your sprites as i have corrected older sprites of mine (eg 81,44 etc).So use them as a base if needed.I might be able to drop off some sprites before i leave.

Information re: Livery Schemes and years, from Railpage Australia.

1980: PTC split up. Rail operations to the State Rail Authority, buses and ferries to the Urban Transport Authority. SRA had a subsidiary Railway Workshop Board.


So, until 1980, we use NSWGR painted stock and liveries. In 1980, new vehicles start being platstered with the SRA Logo

After this, split schemes.

Hey peoples,
As you may have seen, not much is happening publically in the ausset recently. However, I am still working hard on coding, and would like to appeal to any potential artists, feed us sprites!
Top

New version! get it here.
Top

Ahh, i have sprites but can't get them here

.Post them soon though.Containers mostly finished ( from 1970 to present) and dogboxes and oil tankers.I was meant to get them here to be coded while i was away, oh well.

Had a little time to my self to get some sprites finnished.Most passenger stock is nearly complete with bs/fs,SA,indi/ghan to go (and easily to complete).The container loads are devided into time frames-1970,1975,1982,1994,2002.The time frames are a bit rougth. Hope this is enougth sprites to keep our coders busy. 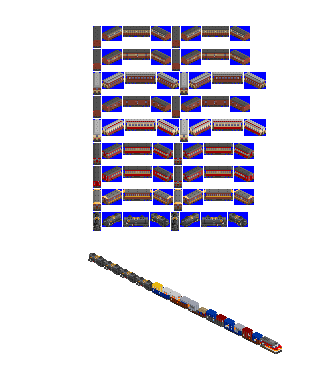