In this terrain, there lays 2 continents seperated by a long strait. One shore there are cities with dense population, and beyond the lakes there are timber and iron resources. But these resources must be transported to the steel mills and lumbermills on the other shore, beyond little villages. Respectively, there are farms, coal mines and oil wells on these side, and they must be deported to the big cities to make a profit. Resources and facilities are not by the water and one shore is too dense to allow any space for railroads, that is the challenge.

There are also two cities far away to set up a passenger service, but one is on the top of a hill and not allowing any space for airports, but can it be connected to the world through a bunch of bridges over the archipelagos? 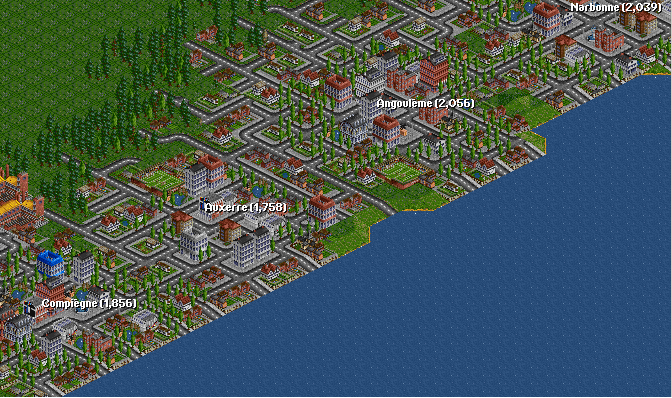 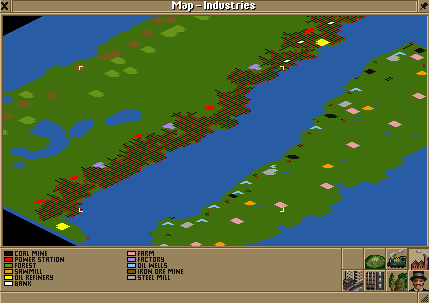 My first scenario for openTTD... 256x256 for v0.4.x of the valleys around Mont Blanc - the map was imported and tweaked using DaleStan's patch, then towns, industries and even trees were place by hand. I live locally, and wanted play around my home town.
This scenario has lots of mountains - don't play this if you like big flat areas or ships. There are big industrial estates in the two lowest, widest valleys, while most of the supply industries are further up the valleys.
I've played it through once so far (with no AI opponents), and it gave an interesting and varied game, from managing massive traffic flows to Aosta and Sallanches to persuading the high-mountain cities to grow. Incidentally, I count it as cheating to use the map edge slopes for this one - but it's up to you...

PS. The map angles are all wrong for recreating the Mont Blanc Tunnel - I've put it in anyway
PPS. You can use canal squares to preserve mountains when growing towns in the scenario editor... 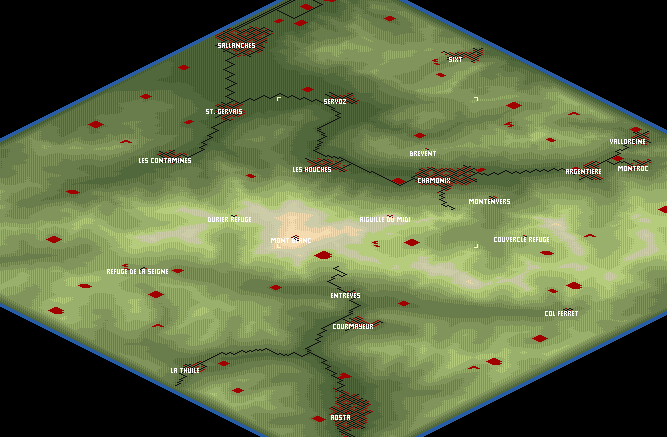 You're giving me too much credit there, lostinthemountains. cccp made the patch; I just adjusted a few things and provided earlier Windows binaries.
Lately, LKRaider has been providing more recent binaries with the PNGMap patch.
To get a good answer, ask a Smart Question. Similarly, if you want a bug fixed, write a Useful Bug Report. No TTDPatch crashlog? Then follow directions.
Projects: NFORenum (download) | PlaneSet (Website) | grfcodec (download) | grfdebug.log parser
Top

Here's my scenario, it's an 512x1024 arctic map with French/Swiss sounding custom townnames, high mountains and low land, and rivers!

Last edited by Purno on 03 Jul 2005 10:13, edited 1 time in total.
Contributor to the The 2cc Set and Dutch Trainset. Inventor of the Metro concept. Retired Graphics Artist.

Looks amazing, one comment though, how would anyone live there? No trees! This scenario will totally blend in with the swiss train set wouldn't it?
(If the train set will ever be finished)
Nope not all dodo's are dead (yet), one has survived!!!
Top

dodo wrote:This scenario will totally blend in with the swiss train set wouldn't it?

I don't quite understand you, sorry, can you explain? I don't seem to fully understand the word 'blend in', although I have searched it in my dictionary.
Contributor to the The 2cc Set and Dutch Trainset. Inventor of the Metro concept. Retired Graphics Artist.

"Blend in" - seem to be designed to go together, to not be able to tell apart.
Melt with the Shadows,
Embrace your destiny...
Top

exactly, thats the translation!
Nope not all dodo's are dead (yet), one has survived!!!
Top

Im almost definetly playing that scenario as soon as we have a fully coded version!

Ok, here is another Scenario for you.

Thats a little bit unbalanced but good to play, i think.

map.png
To Big for screenshots but here is the Hightmap for PNG Map Import.
Created on Integrated Build I4
(10.32 KiB) Downloaded 896 times

Nope not all dodo's are dead (yet), one has survived!!!
Top

they arn't links, they're attachments.
JPG SUX!!! USE PNG!!!
There are times when JPG is useful, TTD screenshots is not one of them. Please use PNG instead.

And they work fine here.
GoneWacko. Making [url=irc://irc.oftc.net/tycoon]#tycoon[/url] sexy and exciting since 1784.
Top

Hi! Here´s my first public scenario. You´ll find it a bit small (64*64) but will keep you a bit entertained for a quick game.

It´s been built from scratch.

Any comments will be gladly accepted! 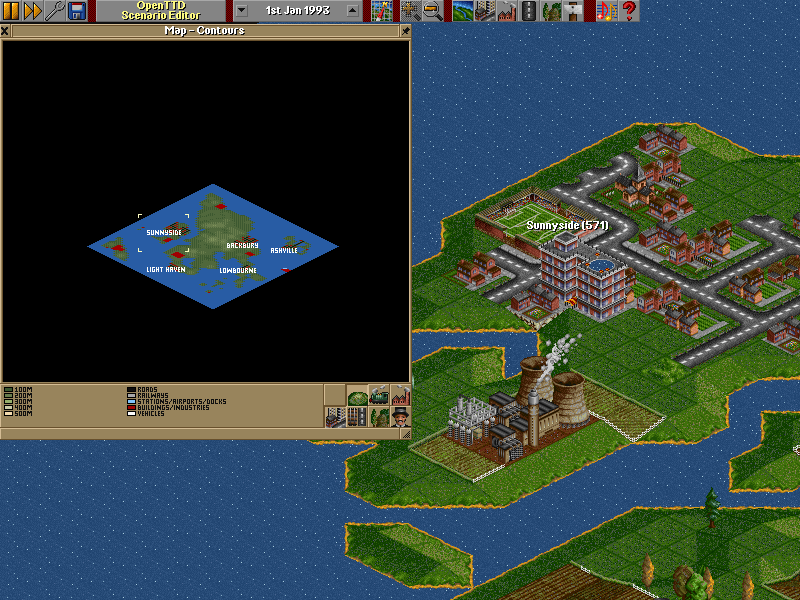 Welcome to the lands of The "German Waltzer" Scenario for OpenTTD! From the metropolis of Bieleberg in the north to the hill top city of Nienbrück, breath-taking views all around as you follow the river from north to south with its various tributaries branching off to other areas.

With the mountains in the west and the land of many towns in the east, there is something for all, be it the many villages, towns and cities just begging for a transport system or connecting the dotted industries that are placed strategically throughout the land. There is a pre-planned route which goes up and down both sides of the main river. Including the run through the cities!!

This map will have something for you!!!

So without further ado, i bring to you: The "German Waltzer" Scenario!

BE WARNED, this scenario is not yet complete, newer versions WILL be posted as they are made!!

I think I have THE job for you: go sell vacations

Nope not all dodo's are dead (yet), one has survived!!!
Top

I made a scenario based on my previous one, but than smaller (256x512)