Make game fun at the start

Make game fun at the start

I generally play passenger only games, But lately the start is kind of boring. Do you guys have any suggestion to make the start interesting?

I play the game to grow a massive network with some junction stations at big cities, not to overcome the early game difficulties starting out. So, I usually start out at 2070 (so I don't have to go through the torment of having to replace all the trains over and over again) and I generally turn on magic bulldozer and give myself a gigantic subsidy.

I'm aware; it's cheating. I do not care. I'm well capable of playing the game and enriching myself early on, but the nuisance industries provide me with I do not want. The nuisance of getting a station near the centre of a big city, I do not want. For me the challenge is getting my semi-realistic network to run smoothly.

I just want a glorified sandbox. Openttd provides just that. However, how do I make the game fun at the beginning playing this way?
Top

To start with, it is too easy and too fast to make money with passengers (or even mail in a lot of situations). I tend to start by using freight such as coal, iron ore and wood to start with, then use the freight stuff to build passenger stuff later on, and eventually i end up with a huge network like this. Admittedly i tend to play the same game for 6+ months, and the gmaei s always running in the background and i alt-tab to it when i have spare time to build more.

Expresso wrote: ↑
03 Nov 2019 16:59
I generally play passenger only games, But lately the start is kind of boring. Do you guys have any suggestion to make the start interesting?

Try one of the game scripts.

It randomly assigns a town that you have to increase the population to 20,000. It also assigns some additional delivery goals that you have to meet during the game or pay a penalty. The town grows by delivering specified cargo, which becomes more complex as the town becomes larger.

If you like it, see some patch files that I uploaded on the last page of the post to change the penalties.

For me it's not the start that is boring, it's after you have tons of money and no challenge whatsoever.
Goal-Based City Growth is a good one, I think I used it at one point.
Playing against AI taught me a good deal about how to make extreme profits. Usually the AI can outcompete my trains only using road vehicles, really impressive.
And I currently use one script called "City Growth Limiter", cities after a certain population (custom value) can only grow after a certain percentage of passenger/mail transported every month (I set it to 30% but you can go higher if you want) Helps a great deal to keep cities from growing too much without control.
"Watch that s***, cowboy"
Top

Is your game set to industry funding only? I hate how there's no thought on where industries are plunked down.
The way I run the game is like a model railroad/cargo management simulator. I start of with a custom map, (for vanilla TTD) it's 4kx4k with a huge gap of water between landmasses north and south to simulate two separate continents, and add a few rivers by lowering a ribbon of land from the sea to north or south edge (not by using the actual river option). I add a few towns spread out over the land, and semi-randomly place a few mines, with an associated industry near one of the towns. For instance a coal and an iron mine with a smelter. Other sources and industries (FIRS) work just as well.
From there on it's about creating the transport routes, then funding and creating industrial parks with similar industries near towns, building distribution stations/docks, and sending desired cargo from one place to the next, growing the infrastructure in a sort of organic manner.

For instance (from my crude test game): Kedinghead Cross's first industrial park to the south began with a lumber yard: 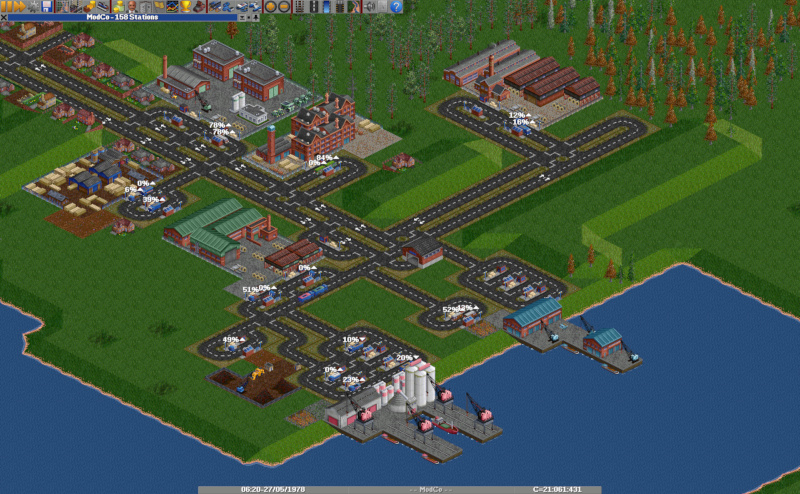 The park to the west that grew out of a single sawmill provided with wood by boats from a forest near the north border.
Now it has several industries, a distribution station with train yard, and a separate station for clay, sand, and stone from pits at the north-east. The trains used for that are multi-loc, 40 wagons, and haul 2600 or 5200 tonnes of material (with the wagons that I added to my custom Dutch trainset grf) 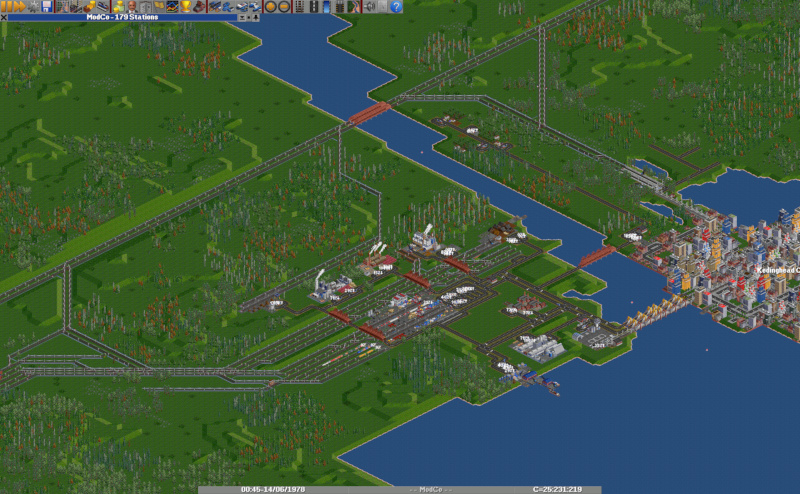 Edit: one more example, Cadhattan park in the north-west began with one farm and a flour mill, and helicopters(!) delivering food to Kedinghead Cross terminal: 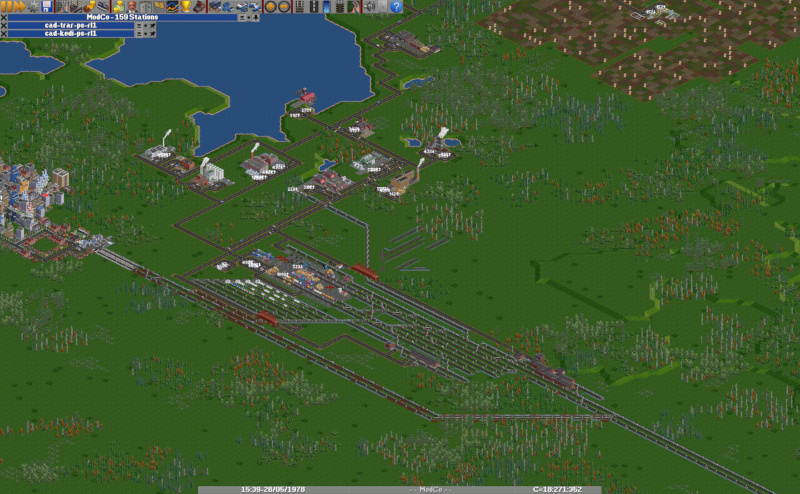 This is what keeps it fun for me, expanding or starting new industries, then making sure cargo goes where it's needed all over the map by truck, train, and ships. (cargo dist set to manual, automatic makes too much of an unbalanced mess).
As for the passenger side it's similar, towns can't build roads themselves and screw up the sights, so I decide in which direction it grows and expand the passenger network to keep up with growth.
In other words, it's industry that keeps things interesting, but you need to take control like an industrial tycoon (funding only, construction as other industries).
One advantage I have, I run with my realtime patch and time goes by as fast as I like it to, which also means I can start somewhere in the early 1900s and upgrade vehicles at a leisurely pace as time goes by slowly without needing to use the date or even money cheat (especially useful when running the game with huge maps like JGR's version).
Tinkering in the code in between writing mostly naughty stuff.
See https://www.patreon.com/scifurz
Top

Time does fly playing with pixels.
I don't want to imagine how much time redrawing most wagons will take in the trainset.
Tinkering in the code in between writing mostly naughty stuff.
See https://www.patreon.com/scifurz
Top

Nice screenshots, thanks for sharing. Yeah one idea that occurred to me now: it would be nice if in the map creation screen there was an option to "Add only primary industries", so you would have to fund all secondary industries yourself. That could be a nice way to keep you occupied with a map, wouldn't it?

I spent some time playing Railroad Tycoon 3 (one of the few games that my computer can handle, otherwise would be playing Transport Fever) Although the campaign missions are fine and keep things moving, I found out that the game is a little on the "too hard" side due to the way the economics work, you are constantly walking on ice there, annual profits can drop out of the blue, it's not a "relaxing" game the way OpenTTD is. So now I have new perspective on "sandbox" games.
"Watch that s***, cowboy"
Top
Post Reply
8 posts • Page 1 of 1