I've been playing OpenTTD for a long while, but just decided to register here and ask for some feedback on the junction I've developed. I hope I have chosen the right forum for this.

The junction can be seen here: 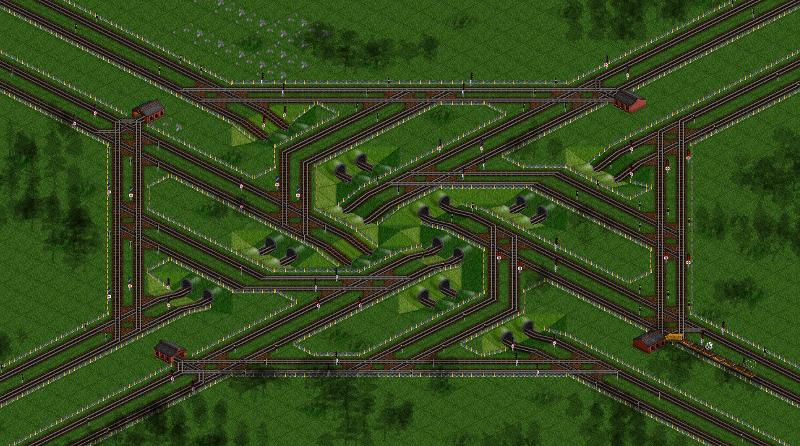 I assume it's not unique, but unfortunately there is no forum search on junction shape

As far as I can tell, the main disadvantage it has are non-natural turns. However, my trains (normally of length 5) can pass it without much speed reductions in any direction.

I'm using this junction as a basis of the grid network that covers entire map, going through less populated areas without industries, later connecting individual stations to this network one by one.

Do you all see any other problems with or possible improvements to this junction? Thanks!
Top

I like how your junction looks but I think that all those level crossings will make for quite a bottleneck as you get more traffic through there. I also think that mixing depot traffic into the junction will cause a lot of slowdowns.

I don't really know how to classify junctions but it looks like a variation on the star to me. You can find all sorts of junctions on the wiki.
https://wiki.openttd.org/Star_Junction
Top

Hi, i see one problem, at those consecutive tunnels you doesn't have any semafors.
Top

Thanks for the feedback!

I likely can remove those depots by changing the default settings. So far I always let my trains run on default maintenance schedule (every 150 days) and this led to situations when a train would take a wrong turn at the junction because it suddenly decided to go for maintenance and the nearest depot was at the "wrong" line. I'll see how much effort it will take to just enforce maintenance at the stations and disable the regular one.

Regarding the congestion when the map fills up - I haven't seen it so far, but I'll keep looking.

Regarding the absence of the signals in the tunnels - yes, I've made a conscious decision not to add them since it would require expanding my junction to occupy even larger space. At the moment the tunnels I have can be safely replaced with the ones with length 8 (and it will even cost less since less terraforming would be required).
Top

HI, back to that semaphor between tunnels, what about instead of the second tunnel you put that double track above to bridge and put semaphor under it

Thanks for the idea- I didn't think about it! Indeed, it will allow the signal placement there.

*Out to modify some junctions in the last game

I think the depots at each entrance are counter-productive. I understand that their purpose is to reduce the probability of trains breaking down while passing the junction, but a train entering the depot blocks the line just like a broken one. Moreover, the depots are placed in such way that a train that enters one of them would be blocking not one, but two lines 50% of the time.

Now consider what happens in case of a prolonged traffic jam on one of the branches. The trains approaching from that direction will have very low reliability, and the pathfinder will try to service them at the first opportunity. As a result, most trains will enter the entrance depot, jamming one or both tracks in the process, and the rest will enter the junction without servicing and likely break down in the middle.

The proper way to build depots is placing them some distance ahead of the junction, and arranging them in clusters.

Actually, this problem is present in most of the example junctions in the wiki. This happened because those junctions were designed before the path signals have been introduced. Back in those days, each train used to occupy not just its own path, but an entire block of connected track between signals. In order to minimize the occupation time, it was customary to make blocks that contain the track split as short as possible, but with advent the of path signals this approach become counter-productive as well.

odisseus wrote: ↑
09 Sep 2019 23:51
I think the depots at each entrance are counter-productive. I understand that their purpose is to reduce the probability of trains breaking down while passing the junction, but a train entering the depot blocks the line just like a broken one. Moreover, the depots are placed in such way that a train that enters one of them would be blocking not one, but two lines 50% of the time.

You have to put a fail-safe depot on every split if you don't want your trains to get lost and jam something else. Making sure those depots aren't used regularly is a separate issue.
That said, making big networks with breakdown enabled is a lost cause anyway imo.
Top

Being a retired OpenTTD developer does not mean I know what I am doing.
Top
Post Reply
9 posts • Page 1 of 1