All the fences are in this set and there is a lot .. as I was making some to go with my railway tracks and they are included.

If you have a saved game with AuzFarmAndFenceObjects in .. well these files and the one on bottom last page replace that object set .. Two for the price of one.

Here the source and the game file.

I mainly designing this to go with a Industry Set I making called AuzInd2019 .. when it is finished most industries will only be between 1x1 and 2x2 in size, and you use pieces from my objects sets to extend the Industries bigger.

These are bits and pieces of Industries from FIRS 1.4.3 and other resources.

Here just a few samples how you can extend the sizes of Industries .. 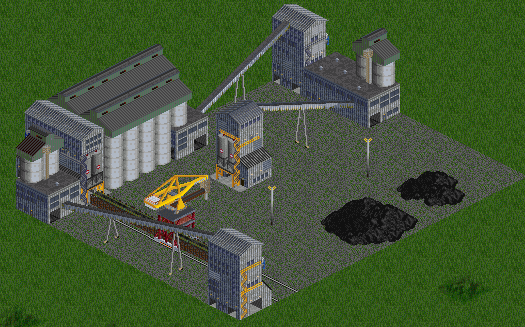 To extend the Farm Industries us the AuzFarmObjects and AuzFenceObjects.

This set contains buildings to build a Power Station and has power poles and telephone poles. 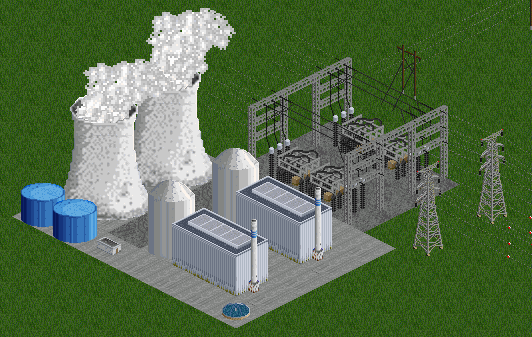 Long time ago I did some Overhead car Parks that overlap over railway lines, roads, stations and what ever else like to overlap over.

Than late last year I worked on another car Park set which much help from Pyoro and his project "Parking ... Things"
Find at viewtopic.php?f=26&t=76172&start=120 where you will see a lot of my work as well.

I've combined these 2 car parks in to one object set. 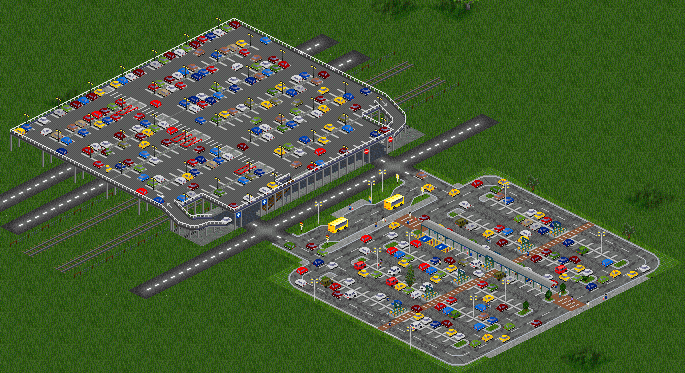 Like to eventually redo the Overhead car parks as a multi story parking lot and make it so the first level is same height as top of a slope.

More will be added to this set when get chance.

This project still has a lot t do to it.

Some places like to have underground railway system, but unfortunately railway stations underground to my knowledge is not possible.

So like to make a variety of Overlays to hide the railway lines and stations.
This station: 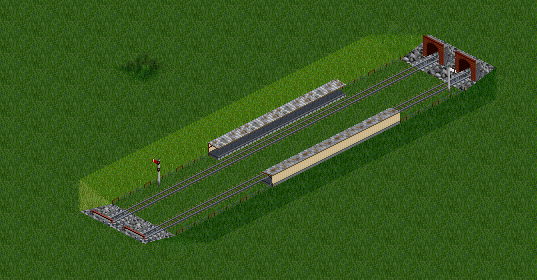 Can be hidden with the Grass Overlays I done.

The overlays can cover 4 railway tracks .. main problem is some overhead wires stick through the grass.

This project still has a lot t do to it.

Some places like to have underground railway system, but unfortunately railway stations underground to my knowledge is not possible.

So like to make a variety of Overlays to hide the railway lines and stations.
This station:
Subway Station.png
Can be hidden with the Grass Overlays I done.
Grass Overlaps.png
The overlays can cover 4 railway tracks .. main problem is some overhead wires stick through the grass.

I think even better would be if you have set with some basic features:
1. Stations with grass/pavement/buildings/parks overhead to create variety and would blend into cities.
2. A simple track set with grass/pavement overhead (Metro tracks does this, a little more variety won't hurt)
3. Tunnel graphics which perfectly blend with the tracks and stations
Do you like drones, quadcopters & flying toys? Check out Drone Strike Force!

These are being designed so can make the Depots look different and bigger.

These object ones basically designed for Road and Tram Depots. I have train depot extensions in my Aus Station Sets and intend to also make some objects ones as well eventually. 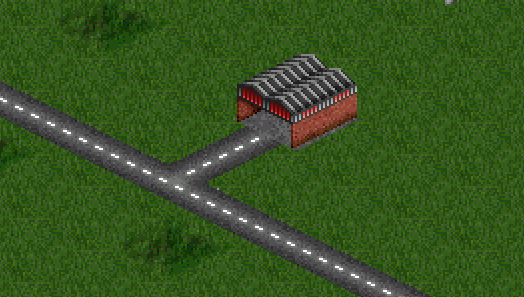 With the object pieces. The pieces can also be used to hide Bus Stations and Truck Loading Bays. 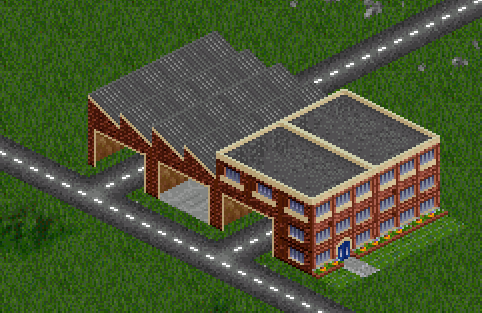 Hope to add a few other designs here too.

kamnet wrote:I think even better would be if you have set with some basic features:

Yep that is my intentions to also have buildings and other features to overlay stations.

I think not just a Object set but also a Station set that can be used together.

I think by separating all the different object types .. will make it easier for me to add new pieces and later, much later, when I think I finished and no more to add, see what ones can be combined together.

I forgot to put the source files in forum from last 2 sets.

I've uploaded the latest Industry and Station sets to Bananas.
All previous versions that are out dated have the wording *** THIS GRF IS OBSOLETE ***

How do you check this.

Click on any one of my files I have uploaded in the past.

Look in the CONTENT INFO window to the right.

If the file is out of date and has been replaced by a newer version that can be found in Bananas it will have the wording in Description:


I can not do this to the any of the Object Sets yet until I finish fixing some issues with them which not sure how long this will take me.

I did some up dates to the Fences. Almost all the back fences were out slightly in alignment .. the needed to be lifted 1 pixel.

Also by doing this I plan to adjust the fences in my track sets so they will also align with the object ones.

Here the latest AuzFenceObjects with those fixes.

I making Objects, stations and bridges all for use with the Underground Railway Netowrk.

Experimenting in making a sub-station Waypoint to got with my AuzWaypoints and discovered the object substations are way too large so looking at doing them again and making the towers shorter and changing the layout.

I placed one of the original tower next to them to compare the difference.

Still some wires to add to what I done so far and some other ones to make.

There is a substation not far from me .. intend to pay it a visit very soon and get photos of each section from front to the back and try duplicate all the strange looking things used in a power station.

(The big electricity towers to the left is courtesy of SAC).

Also replacing the ground tile to a gravel instead of the ballast or concrete so can see things clearer.

Looks amazing! Can't wait release to try it! Btw, do you have plans to introduce more power towers for different voltage? If not is that possible just introduce same towers but with different height?


Many thanks,
Vlad
Top

Some lovely objects in here, am having fun using this set in my game. only minor drawback I've noticed is some weird clipping on the overhead car parks, I was going to use these for my "park & ride" style stations, overall though, is a brilliant grf

TTDFanDNUA wrote: ↑
14 Jul 2019 15:50
Looks amazing! Can't wait release to try it! Btw, do you have plans to introduce more power towers for different voltage? If not is that possible just introduce same towers but with different height?

The tower isn't mine a person called SAC allowed me to use her tower. I've been out photographing other types of towers to see if I be able to draw them when I get the chance and have the urge to work on them.


steamymart wrote: ↑
14 Jul 2019 18:18
Some lovely objects in here, am having fun using this set in my game. only minor drawback I've noticed is some weird clipping on the overhead car parks, I was going to use these for my "park & ride" style stations, overall though, is a brilliant grf

The car parks are overlaps and unfortunately will get that problem especially those that overlap more then one tile. Hope to eventually make them multi-storey car parks and make them overhead station platforms and station non-track tiles and that way they will not need the extended overlaps.

Making a Object set for Tunnels and railway cuttings and embankments

I started out trying to make overlaps to uses as false tunnels so can have tunnels as if climbing the range or curved.

It still in testing and planning stage. (A rough sample its in the source file.

At the moment is called "Grass-Temperate Landscape Tunnel Overlap"

Another idea is rocks Cuttings and Embankments

This is a bit more advanced in planning as once I get this right the tunnel idea might become a reality.

When we build roads and railway lines along cliff edges and want the embankment and cutting to be rock. Some locations it not possible to add the rocks properly.

So I trying to make Slope Aware Rocks that also overlap and get an effect something like this. 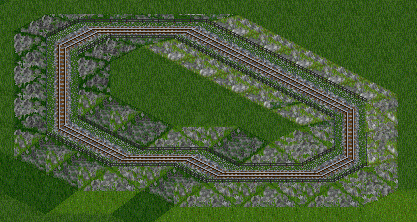 Needs a little work to the tile edges, but will make sure I have it all working properly before doing that.

At the moment is called "Rocks Slope Aware Templates"

Here the source and game file if any one interested to test and let me know what you think.

I've updated the Cuttings and Embankments. 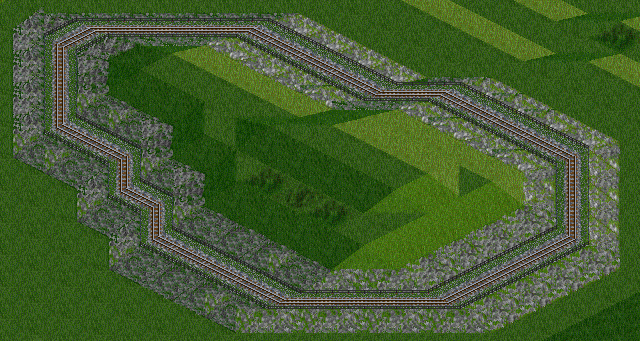 Now to see if my idea will work with Tunnels.

These 3 tunnels I hope I can make some object overlaps to hide the track between the tunnels.

This idea is for those like me who like to make things a bit realistic in their games.

Here the update game file for the cuttings and embankments:

Great idea Garry! I play on mountainous maps so these will come in handy.
Top

Diesel Power wrote:Great idea Garry! I play on mountainous maps so these will come in handy.

Thanks kindly for the support.

There is more involved then I first thought with hiding the tunnels. Especially when looking at curved tunnels and tunnels with portals on different levels.

Will take me a while to do most of the combinations but shall see what can be done.
These curved tunnels almost got them covered. The top one the hardest as it on 2 levels.

The results for the overlaps so far look like this.

The tracks between tunnels with the curved section running North to South might be a problem unless make the curce short (thinking of the short curve that might be the answer to all the tunnels make the gap between the two tunnels as short as possible).

Any way here the game file to show where I up to. Been some improvements to the Rocks as they should work on all terrains.