Love the RV1 bus! And the new parameters.

I echo Bob’s thoughts that some seem a little bit disproportionate - the Solo seems very tall for a minibus.
Official TT-Dave Fan Club

That'll teach me to attempt a big spriting session after a long day of DIY and gardening! Hotfix version 26 is now live, and the Austin 10hp is no longer a Transit-dwarfing monster. I also dropped the height of the Solo by a pixel or so - it might still be a little larger than it should be but it now looks more balanced against the other buses.

I suspect at some point I need to go through the tracking table adding dimensions and correcting the scale of anything that's too far out - a few of the earliest vehicles I drew ended up too tall or wide and have never been revisited.
Top

New minor update pushed out with some fixes for alignment and cargo graphic problems, and a Scammell lorry for the 1920s: 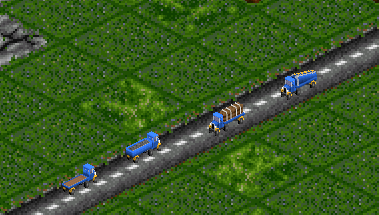 Update 29 30 has landed, and the big news is all about things being small. Firstly several vehicles have been re-scaled, with the early 20th century trucks now an appropriate size and a couple of overly tall single-decker buses finding pixels lopped from their lofty dimensions.

In keeping with this downsizing attitude there's a Sherpa minibus introduced in the '70s, and a Scammell Scarab for shunting small quantities of mail and goods between railway station and town centre.

Fantastic work, thank you! Your set is definitely one of my absolute favorites. Running it alongside a couple of other sets, I noticed a couple of applications for which a category between the heavy non-articulated lorries and the smaller vans in later years would be helpful as using the big rigs can sometimes seem like overkill. Have you considered adding a range of lighter trucks in the 7 to 18 ton (GVWR, not payload) range to your set?

Another suggestion affects mail capacities in realistic capacity mode. I would suggest to apply a multiplier only for mail capacities as a bag of mail doesn't seem like a lot so it feels unnatural that a Sprinter only carries 3 of them. Doubling or even tripling them would seem more natural to me and get them closer to the capacities offered by vans in Polroad.
My screenshots
Top

Thanks! Those are both thoughts I've had while playing, and vehicle suggestions are always welcome. Will add them to the backlog for when I next get time to work on the set.
Top

Have you ever thought about making Renault / Irisbus Agoras ? I remember there were a few in the UK.
NewGRFs by Tony Pixel :
North American Passenger Railroads
Not Enough Subways

There's a new update out, which brings a series of small trucks to the game. As well as the requested Ford Cargo, Iveco Eurocargo and Mitsubishi Canter I went a bit further back in time, so you'll get a Bedford TK to play with in 1959 and a Ford D-Series in 1965 to start building up those small truck routes.

A preview of the new vehicles: 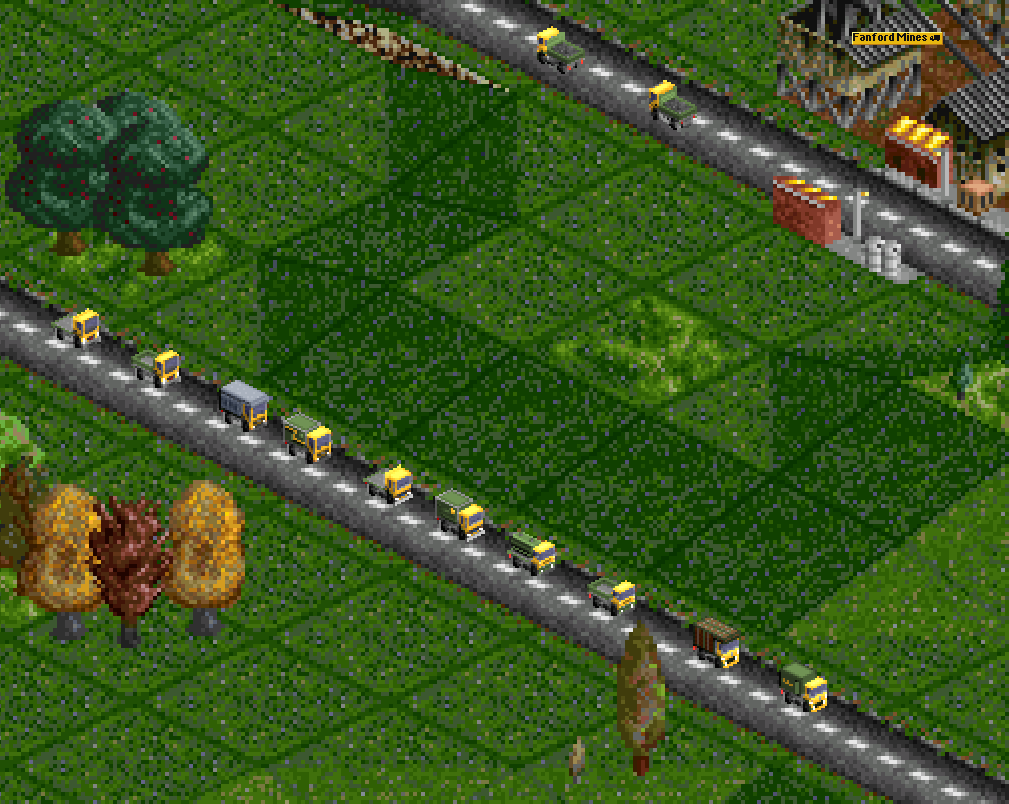 The rest are still on my list (and fixing up my template system so I can up the mail capacity when realistic capacities are on!) - we have a house move to prepare for and of course I need to go to an office and do some real work every once in a while, but hopefully I'll get a bit of time in between it all to make some sprites.
Top

So, i've got further ideas of things you could do :
- Leyland / DAF trucks, especially the 400 and the 80.
- Saviem and RVI trucks. There were tons of Saviems, and mostly RVI D and Magnums in the UK.
- RVI and Irisbus buses. Equally, there were tons of Irisbus Agoras in the UK, as well as some Renault and Irisbus coaches.
- More IVECO trucks : the Trakker, etc.
NewGRFs by Tony Pixel :
North American Passenger Railroads
Not Enough Subways 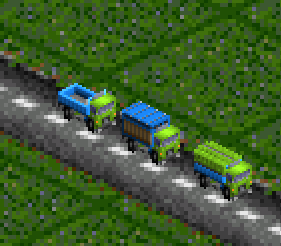 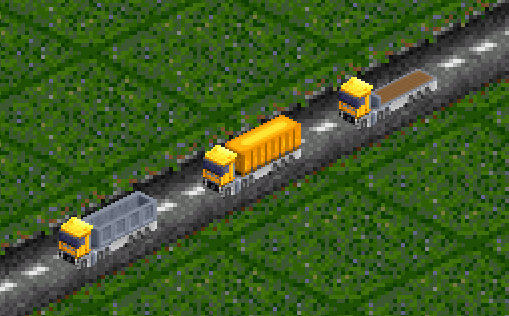 I also boosted the mail capacity of the vans when running in realistic mode, which should hopefully make them the preferred option for moving post around the map, as with their real-life counterparts.

This is one of the best sets of road vehicles we’ve seen on the forums for rather a long time. Bravo chap!
Official TT-Dave Fan Club

*tap* Is this thing still on?

Thanks for all the kind words! Not had much progress of late: I lost most of the last three weeks to the house move, especially since the new place is a total refurbishment project and I had to do a load of work to do so we could get two of the rooms completed and at least have somewhere nice to hide when we get fed up with looking at holes in the walls and ceilings.

With that done I've had a bit more time to relax, so naturally I've been playing a bit of OpenTTD. One thing I noticed is there's quite a large gap between the Northern General SE6 and the Leyland Leopard where you don't get any new single deckers. With that in mind, I've added a Bristol LS and a bonus Bristol Lodekka to keep bus depots busy in the early 1950s.

Also still slowly working my way through the requests, with a Mercedes LK arriving in the early '80s.

Preview of the new vehicles in update 34, which as usual is now available on BaNaNaS: 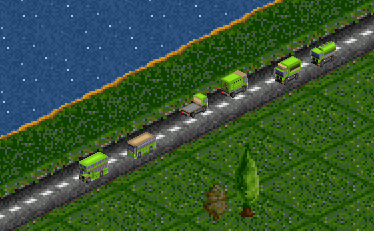 I think you could make Chausson APH or APVU buses, there were a few in the UK too, so i think it would fit in the 40s. Actually there's even many other buses and trucks to do from Volvo, Renault/Saviem/Berliet or IVECO

An overly warm Sunday means it's too hot to do much other than find a shaded corner and make some sprites. Update 35 is out now.

I've been filling in a few more of the gaps, with the following vehicles added to the roster:

The new lineup below: 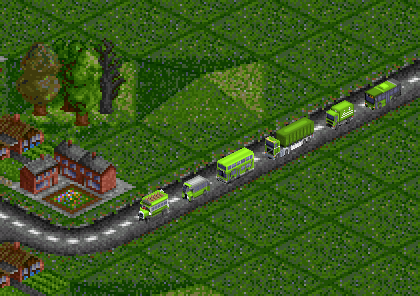 I also started adding a little bit of flavour text on the purchase window. At the moment it's a simple usage guide to the type of vehicle, but over time I'd like to put in some vehicle-specific facts and history as well.

Finally, while this isn't in the current release I've been playing a bit with 4x zoom sprites. For example, here's a typical scene with the set as it is now: 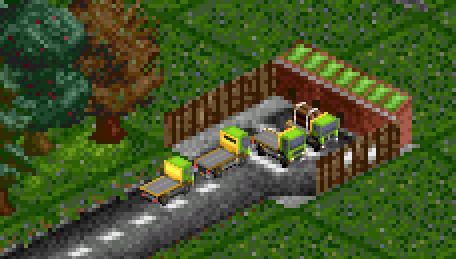 And here's what it would look like at 4x: 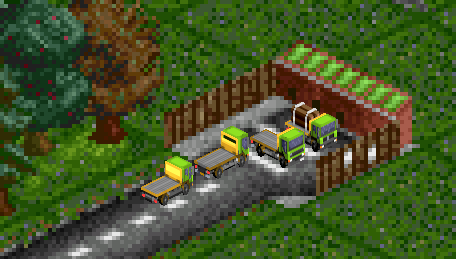 I'm torn as to which I prefer! Part of me prefers the chunkier character of the 2x sprites, with the 4x feeling too "clean", but there are other scenes where the 4x versions look great, like this one:

Any thoughts? I've left it all at 2x for now, because I don't want to add another 15MB to the GRF for a feature nobody's that keen on, but if there's interest it might be worth a bit of investment into my sprites and toolchain.
Top

Great looking set overall, thanks for all the work you put into it.

One small comment, the double deckers look too low - especially compared to the artic

How great, Timberwolf. That vehicle set is the best you could have for Europe yet

It's a problem with the way that everything in the set is built off a standard template - which only allows vehicles to be 10 pixels high (in 1x units) before the front gets chopped off in the north-facing | view. I realised it when I added the first double-decker while I was already many vehicles in, then (perhaps foolishly) decided to live with it rather than re-scaling or re-templating the entire set.

Now for the good news. I'm pretty sure looking at those templates again, I can get another 1-2 pixels of height to play with. Which at TTD scale would make all the difference. That's without trying to foreshorten anything - doing so might throw all the proportions off, but if it doesn't then there's possibly another pixel or two to be gained.

I think we could be on to something with this template jiggling... 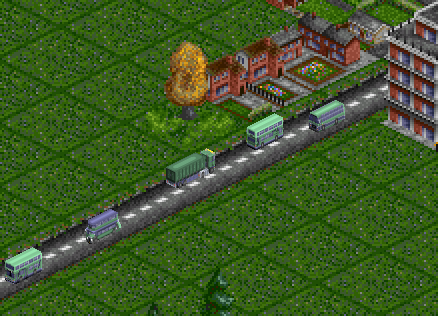 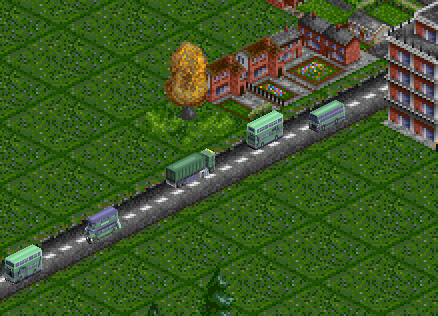 The proportions look a lot better to me now with the double deckers at 11.5 pixel height. Next task is to go through the set and update all the rest for the next release. And resist the temptation to create a GRF with OpenTTD's most ridiculous vehicle animation: