This is a scenario of Chinese dynasty history. Loong is a mythical creature in East Asian culture with a Chinese origin.So I connect China dynasty name into a set of loong in the scenario map.

Each chinese character represents a dynasty, composed of one capital and two cities, and each dynasty has one mountain that has been a marked

If you interested in the Chinese emperor qin shi huang, you can begin development from QIN land. If you like the "The Three Kingdoms"(sango), and you can begin from WEI, SHU & WU. 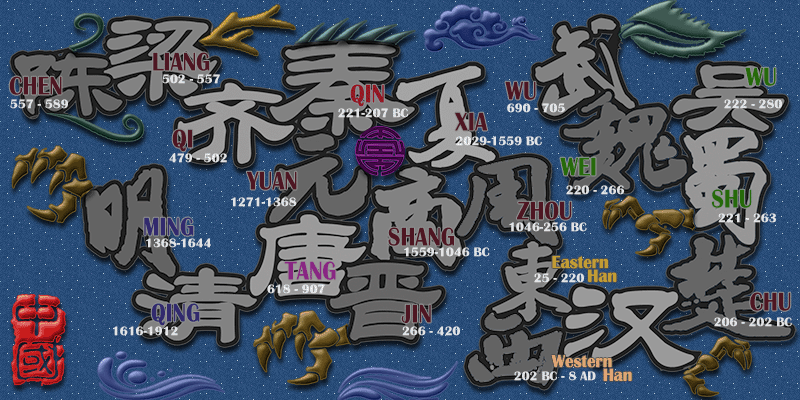 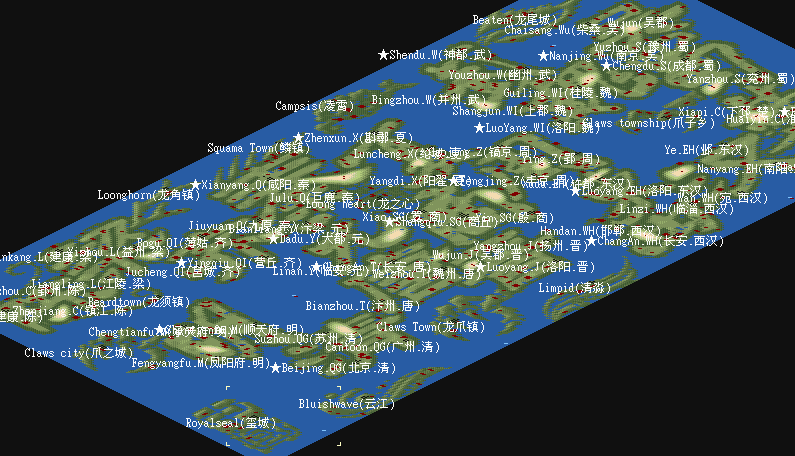 Xia Dynasty：
The historian Sima Qian (145 BC-90 BC) and the account in Chinese the Bamboo Annals date the founding of the Xia Dynasty to 4,200 years ago, but this date has not been corroborated.

Shang Dynasty:
The earliest discovered written record of China's past dates from the Shang Dynasty in perhaps the 13th century BC, and takes the form of inscriptions of divination records on the bones or shells of animals—the so-called oracle bones. The Shang Dynasty featured 31 kings, it was the longest dynasty in Chinese history.

Zhou Dynasty
Bronze ritual vessel, Zhou DynastyBy the end of the 2nd millennium BC, the Zhou Dynasty began to emerge in the Yellow River valley, overrunning the Shang. The Zhou initially moved their capital west to an area near modern Xi'an, near the Yellow River, but they would preside over a series of expansions into the Yangtze River valley. This would be the first of many population migrations from north to south in Chinese history.
Last edited by Leou on 10 Dec 2015 16:50, edited 1 time in total.
Top

Qin Dynasty
The Terracotta Army of Qin Shi Huang.
Qin Dynasty Historians often refer to the period from Qin Dynasty to the end of Qing Dynasty as Imperial China. Though the unified reign of the Qin Emperor lasted only 12 years, he managed to subdue great parts of what constitutes the core of the Han Chinese homeland and to unite them under a tightly centralized Legalist government seated at Xianyang (close to modern Xi'an). The doctrine of legalism that guided the Qin emphasized strict adherence to a legal code and the absolute power of the emperor.

Han Dynasty
The Han Dynasty emerged in 202 BC. It was the first dynasty to embrace the philosophy of Confucianism, which became the ideological underpinning of all regimes until the end of imperial China. Under the Han Dynasty, China made great advances in many areas of the arts and sciences. Han Dynasty is the first opening of trading connections between China and the West, the Silk Road.

Jin Dynasty
The three kingdoms were reunited temporarily in 278 by the Jin Dynasty.

Tang Dynasty
A Chinese Tang Dynasty tri-colored glaze porcelain horse.Main article: Tang Dynasty On June 18, 618, Gaozu took the throne, and the Tang Dynasty was established, opening a new age of prosperity and innovations in arts and technology. Buddhism, which had gradually been established in China from the first century, became the predominant religion and was adopted by the imperial family and many of the common people.
Top

Yuan Dynasty
Large dynasty was established by the Mongolian, It is the first in the history of Chinese regime is given priority to with minority rulers. The Mongolian with its powerful force, not only conquer the central plains and south of the Yangtze river region, also its control scope expanded to the whole region. Become the territory's biggest ever dynasty in China.

Ming Dynasty
Throughout a short-lived Yuan Dynasty, there was strong sentiment, among the populace, against the rule of the foreigners, which finally led to peasant revolts. The Mongolians were pushed back to the steppes and replaced by the Ming Dynasty in 1368.

Qing Dynasty
The qing dynasty is established by nvzhen nationality combined the feudal dynasty, it is the yuan dynasty in Chinese history after the second by minority rule in China of the period, is China's last feudal monarchy countries. In 1911, the revolution broke out, qing dynasty was overthrown, from now on over China for over two thousand years to feudal monarchy. February 12, 1912, the qing emperor was forced to abdicate the throne. Since then, China out of the monarchy into the period of democratic revolution.
Top 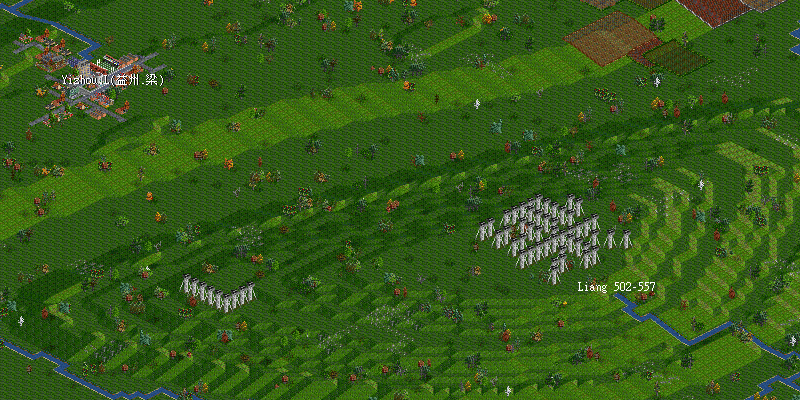 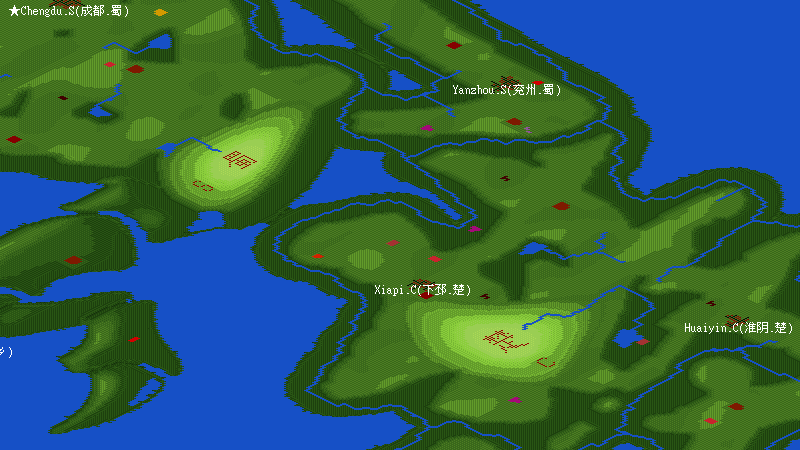 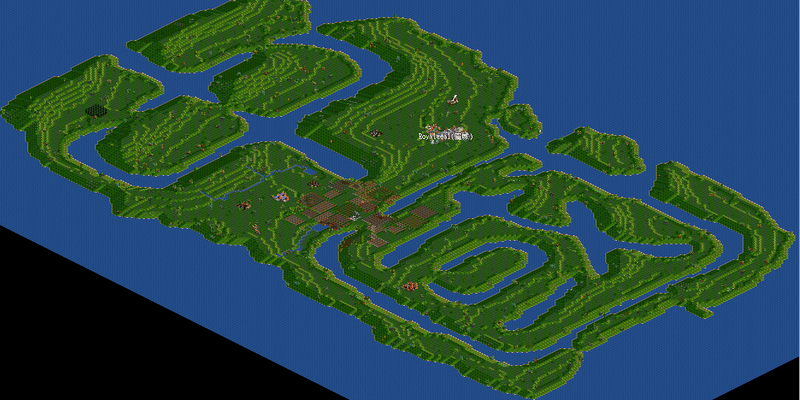 For those whose Chinese history books date to before about 1980,the old dynasties are also known as Hsia,Chou,Ch'in,Kin,and Ch'ing
(Shang,Tang,Yuan,and Ming are the same).
Top

Baldy's Boss wrote:For those whose Chinese history books date to before about 1980,the old dynasties are also known as Hsia,Chou,Ch'in,Kin,and Ch'ing
(Shang,Tang,Yuan,and Ming are the same).

Now we have some updated for this scenario 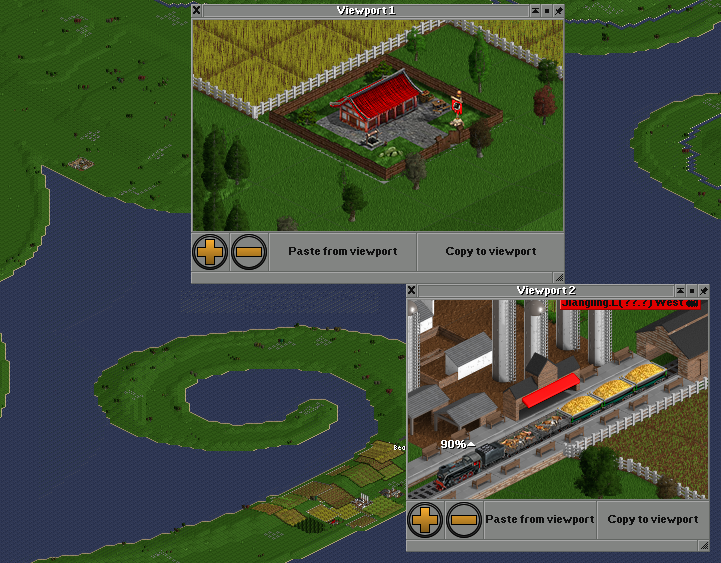