Screenshots of your games! All Transport Tycoon games acceptable (including TTDPatch and OpenTTD).
Post Reply
602 posts

The Yenisei River. Transportation on the ships a variety of cargo

The Village Of Turukhansk. Transportation of wood to the sawmill.

Turukhansk is a village that has lost the status of a city, the administrative center of the Turukhansky district of Krasnoyarsk Krai of Russia. The administrative center of the rural settlement of Turukhansk. There is an airport and river port.
Originally Turukhansk settlement appeared in the XVII century in the confluence of the river turuhan in the Yenisei river, on its left Bank. The cabin (later the city of New Mangazeya) was part of the trade route by Turukhano, which was primarily used to trade furs. Turukhansk subsequently fell into disrepair, was stripped of city status and its name was transferred to the village Monastery, the modern Turukhansk, which is located about 35 km to the South-East, on the opposite Bank of the Yenisei river. Old Turukhansk is now called Staroturukhansk (65°54'55" N. lat. 87°34'30" e (G) (O)). After the October revolution of 1917 has been a trend of increasing population of the village Monastery at the confluence of the lower Tunguska Yenisei, on its right Bank. The village was renamed into Turukhansk.
Since the end of the 1930s the Soviet government created in the Turukhansk territory of the special camps for the exiles. Until 1956, the freed prisoners had limited rights and were settled in remote settlements, including in Turukhansk.
According to the census in 1989 the population of Turukhansk has reached 8.9 million residents, but after the collapse of the Soviet Union, people began to move to more climatically favorable regions of the country, including in the South of Krasnoyarsk region.
The town has two churches: stone, of the Transfiguration (built by Matvei Fedorovich Horoshavin lit in 1829) and wooden Peter and Paul. The Treasury of the house: bread shop, salt barn, wine cellars, and powder. The city is controlled by a Separate Assessor, there are Salt Bailiff and one hundred Cossacks of the Yeniseisk Cossack regiment under the control of one Centesimal Officer.
52 narrow-minded houses, they are inhabited by burghers: 124 male, 107 female peasants: 19 male, 16 female. Houses, generally small, a large portion of heated smoke and no houses. While some have baths and facilities for livestock. Zemliachestvo not developed. Men most of the year they spend away from the city, engaged in hunting and fishing. The basis of winter food — fish and harvested a wild bird.
Mail from Yeniseisk to Turukhansk, and delivered back once a month 5. Mail delivery was carried out in summer by boat and in winter by sled that moved people, deer or dog.
Transport
Along the Yenisei from Krasnoyarsk and Yeniseisk during navigation (navigation in the upper reaches of the Yenisei river approximately from 25 may to 25 September, depending on temperature, plus or minus 10 days) ply ships to Dudinka with a stop in Turukhansk.
[OpenTTD] STD screenshots
----------------------------------------------------------------------------------------------------------------------------------
[OpenTTD] STD saved games - My finished scenarios and saves from the game
My Youtube channel - OpenTTD | Wiki xUSSR set (RU) | Wiki xUSSR set (EN) | Download the latest version of the xUSSR set
TT Screenshot of the Month - the page editor | Screenshot Of The Month Contest Winner: August 2017
Top

I continue to play the current game. Now comes September, 1961. There are many new transport - new buses, trucks, cargo and passenger trams, airplanes, helicopters, different trains (diesel, electric), ships. At the end of the 50s was the replacement of all steam locomotives to electric locomotives and diesel locomotives. Also was increased the number of wagons all freight trains. The old wagons were replaced with new wagons.
All this allowed to increase the total profit.
The screenshot below presents information about the company

As you can see, at the end of 1960 the total profit of the transportation amounted to RUB 5.969.525.550.
The company's balance sheet at the end of September 1961 is 143.660.462.650 rubles.
The value of the company grows every year.
Also increased the number of transport:
421 trains
703 road vehicles
231 ships
13 aircraft
There is active development of Siberia. The railroad built to the city of Bratsk. Active extraction of natural resources (coal, oil, iron ore, wood, oil). Population growth in settlements (villages and towns)
In the screenshot below you can see what has changed in the population throughout the region, also in individual cities.

The smallest by population are the towns of Eastern and Northern Siberia, in the far East. The reason is there are not built a railway, not developed transportation infrastructure. But soon it will be fixed.

As usual a few screenshots from the game
The city of Tomsk is located in Western Siberia. In the city has increased the population in comparison with that in 1940. Actively developed industry - petrochemical, woodworking. Built a new waterfront, new parks. Actively building new residential areas.

The city of Orenburg is located near the South Urals. The city is well-developed food industry. In the future construction of bus routes

The city Perm is located in the Western Urals. It is well developed in food and commodity industry. Built new parks and squares, the new promenade along the river. Construction of new residential areas. There are convenient bus routes throughout the city.

Some screenshots of the extraction of mineral resources in the Urals.
Mining of iron ore near the town of Zlatoust. Transportation of iron ore to the railway station

The City Of Chelyabinsk. Automobile plant. Loading iron ore in a freight train.

Coal mining in a coal mine. Transportation of coal to steel mill

The extraction of gold and iron ore

Later there will be screenshots from the game. I try to do the most interesting screenshots

My new game - Sakhalin island. The scenario is available in the online content game and on bananas

Map Contours and Towns.png
(20.92 KiB) Not downloaded yet 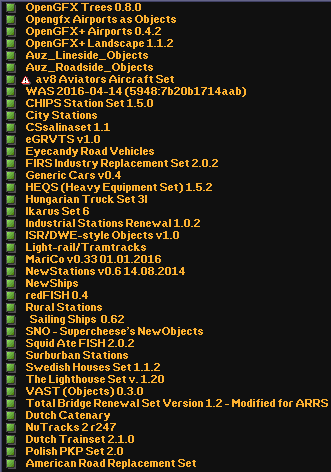 Some screenshots from the game:
General map of the island and network, list of towns

Map of carriage of goods

The town of Alexandrov-Sakhalin: extraction of coal, shipping fish in the fishing port, shipping products to other cities, transportation of timber to the furniture factory from the railway station

Areas of fishing near the village Okha

Industrial zone near the town of Poronaysk

Cargo trams transport livestock and milk in the port

The fishing port in city of Yuzhno-Sakhalinsk

Shipping oil to the refinery, transportation of gasoline on mechanical plant the cargo ships and trains

Financial statistics about the company

The total profit has grown considerably over the last ten years. This is due to the increase in the number of transport and development of all the resources on the island (coal mines, oil wells, farms, forests, all processing plants - oil plant, steel mill, sawmill, grocery stores, factories, furniture factories, fishing ports). It is also associated with the development of all oil fields in the sea near the island and the active development of the areas fishing.
The total number of vehicles:
41 trains (cargo and passenger)
303 (cargo)
395 ships (cargo and passenger)
All trains are divided into groups depending on the type of cargo

And now a few screenshots to show what changes happened in the game.
The population of the city of Aleksandrovsk-Sakhalin is gradually increasing. Construction of a new quay, actively developed fishing port, with nearby areas goes fishing shipping fish. Built a new tram line.

Cargo port for shipping of coal in the steel factory and sending metal into the mechanical plant.

Railway interchange adjacent to a dairy farm. Cargo port to send goods from the farm.

Financial statistics about the company

The total number of transport: In 5 years increased gross profit and the value of the company "Sharkey & Co."
The increased population of each city on the island.
In each city, built the port, new quay, parks. In the three cities built airports - Pogibi, Uglegorsk and Yuzhno-Sakhalinsk. The whole island is connected by road network. All industries involved in the production - coal mines, oil rigs and wells, dairy farms, logging areas, grocery stores, factories, refinery, lumber mill, 2 furniture factories, steel plant, ports and fishing areas fishing.
The City Of Kholmsk. Built a new tram line, parks, port.

The Town Of Dolinsk. Built a new railway station, the port, the tram line.

The City Of Korsakov. Built port for the delivery of products and timber for the furniture factory, new quay, tram and bus line.

Coal mine near the town of Korsakov

Dairy farm. Transportation of milk and livestock in the cargo port.

The Town Of Uglegorsk. Built the new airport, quay, port, tram and bus line. Active coal mining in the mine.