And, in fact, in a roundabout way, you ended up actually answering my former question, as I didn't even notice that the NewGRFs had configuration parameters - which on some of them do indeed let you modify the running costs, which would mean they can be matched to those of the GRVTs!

Also, I think, Power and Max. Tractive Effort should depend of horses number (now it's the same for 1 and for 6 horses), but that's less important. 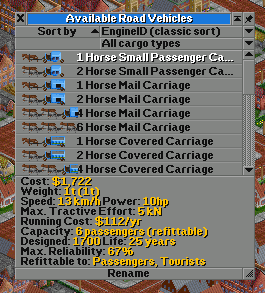 Having an American-style stagecoach would be great, as would horse drawn omnibuses. Perhaps in the future...
Without Trains America Stops

The power of the horse drawn vehicles is not realistic, otherwise they would be unusable. If anything the fewer horse vehicles would, ideally, be less powerful than they are now.
GRVTS/eGRVTS --- Generic Tram Set --- UK Town Set --- zBase ---RichardWheeler.net
Top

Zephyris wrote:It is intentional for the larger horse drawn carriages to only be available later. Imagine the big express mail carriages which were only available later on when roads had improved.

This means (almost) no passenger service till 1830, because small carriages are too slow (so are trams) for the steep rate curve. Well, people didn't travel much those days.


Zephyris wrote:The power of the horse drawn vehicles is not realistic, otherwise they would be unusable. If anything the fewer horse vehicles would, ideally, be less powerful than they are now.

The problem is that 6 horse carriage (mail or passenger) never reaches it's 32 km/h maximum speed on a flat road (it cycles 30-31, which means not enough hp). For a sake of playability lets find a plausible excuse to increase the "power" parameter. Here is a quote from Wikipedia:

In 1993, R. D. Stevenson and R. J. Wassersug published an article calculating the upper limit to an animal's power output. The peak power over a few seconds has been measured to be as high as 14.9 hp. However, Stevenson and Wassersug observe that for sustained activity, a work rate of about 1 hp per horse is consistent with agricultural advice from both 19th and 20th century sources.

So 1 hp is a power of an average horse being used in agricultural sector (and eating accordingly). We can assume that good trained quality fed horse can do 2-3 hp, which means 12-18 hp for 6 horse carriage.
Top

It is a very good GRF i am thinking about adding it to me and my friends co-op lp that we are going to be doing i really like that u can now start in the 1700's it adds more length to the game which is really cool.
Top

Can anyone tell me how and if this GRF solves crossing (overtaking) vehicles? So far I don't understand the rules, when a vehicle may overtake other (slower) vehicle on the road, as well as in case a stopped vehicle or a broken down vehicle.

I'm building a highway network in the belief greater throughput (two lanes) and after all I see that one broken down vehicle stops all vehicles behind it, as well as a slower vehicle brakes faster vehicle.

Why? What is wrong?
Thanks For answering.

Articulated vehicles are not able to overtake other vehicles. That's not a limitation of this NewGRF, it's part of OpenTTD.
Top

I just noticed this minor bug in eGRVS 2.0 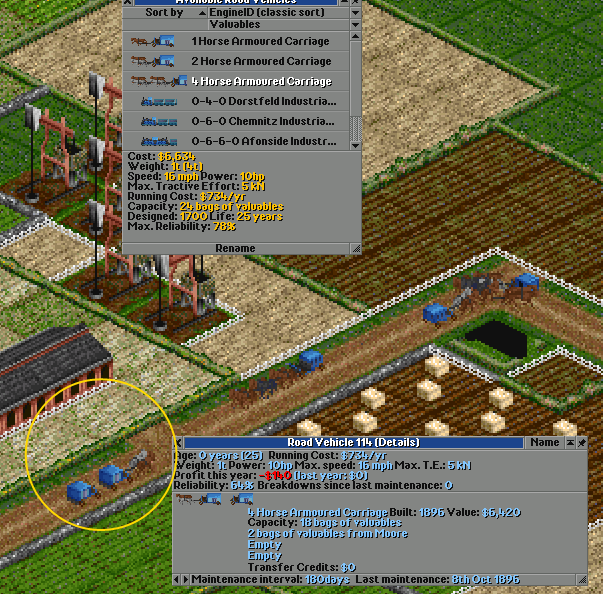 Thanks for the heads up, you can download it here:

Zephyris wrote:Thanks for the heads up, you can download it here:

New policy that has been in effect for a few months now. You can PM a moderator of your choice with your desired changes.


Apparently it is version r174.

I can try r181 later.
Without Trains America Stops

Something I've noticed about eGRVTS 2 is that all box trucks only carry half the amount of refitted cargos as they do goods. Which isn't the case for eGRVTS 1. Is this intentional?

By the way. Thanks for producing such a useful set.
Top

That is because of how those cargoes are defined. And it's the same with eGRVTS1.
Pipelines for the people! PIPE
Top

Ack! My mistake. I checked eGRVTS 1 again and found it to be the case. I could've sworn it wasn't, earlier.
Top

Request: could you please split it into two separate grfs: one for the trams only and other for the road vehicles? I would like to use trams version only.
Top

Different request: Is there some combination of parameters (I haven't found one) that enables all freight road vehicles and the passenger horse-carriages, while disabling motor buses and trams?
If not, can I have one?

Sorry if this has already been asked, but, I seem to be having an issue. When I try to upgrade to the Mettler Archer with Mail Trailer or the Edding Articulo with Mail Trailer, they won't go to truck stations.

Thanks for any help!

Got it. Seems odd that they need to go to bus stations as opposed to going to truck stations.

When going to replace them, they still will not be replaced due to not being able to go to all stations.
Top
Post Reply
194 posts