I'm honored to present you the first release of the

Version 1.0.02 is the first fully playable public release, and it includes locomotives, railcars, and wagons spanning from the early 1880s, when most narrow gauge railway networks got started, until the present days. It models a bunch or real-world companies, each with its historical rolling stock and liveries.
ECS and FIRS (up to version 3.0.10) industry sets are fully supported.

The Set can be played in either Temperate or Arctic climates and comes in two flavors: a "basic" one focused on the most common rolling stock across the country (mainly steamers and diesels), and an "alpine" one centered on mountain lines and their rolling stock (mainly electrics).
For those who don't care about realism, historical correctness and other geeky rivet counter stuff, there is also a "toy" mode that's more faithful to the simple, immediate style of the original TTD.

The Set also includes its own new tracks, featuring 7 track types in total. Each track type comes with new graphics and specific characteristics.

The Set is fully translated in French and Italian, and partly translated in German, Spanish, and Dutch. Help with translations would be much, much appreciated: a file containing all the Set's strings is attached here, for those who would like to contribute.

For the moment, the Set will only be available here, alongside its "do not read me" documentation. Since it doesn't follow GPL, I can't really post it on the online content, and so far I don't have any webpage where it could be hosted.

I'll be mainly working on the Standard Gauge French Set from now on, but I'll keep maintaining this Set in terms of bug fixes, and possibly support for new OTTD features. I'll also try to keep up with any new cargoes FIRS might come up with in the future

ng frenchset strings.zip
if you want this in your own language
(4.89 KiB) Downloaded 209 times

A few screenshots of the rolling stock you'll find here.

In the roaring years of local metric-gauge networks, steamers have the lion's share among rolling stock. We can distinguish "fast" engines, capable of speeds up to 55 km/h, from "powerful" engines, mainly using the Mallet system and capable of up to 500HP. There are also smaller, cheaper engines for local operations.
Electric engines, however, are making their appearance, especially around mountain lines. Both catenary and 3rd rail systems are being tested. 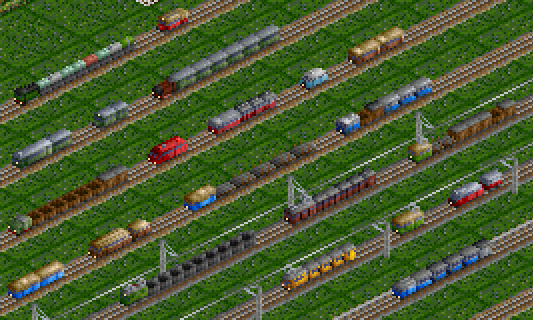 Those small, local networks are starting to suffer competition from road transportation, especially due to the popularization of private automobiles. Steam traction is slowly being replaced by diesel, a cheaper alternative that is slowly becoming more reliable and powerful: as a result, railcars are starting to become a common sight. Electrification is still being used, on mountain lines but also along some local routes previously serviced by steamers. 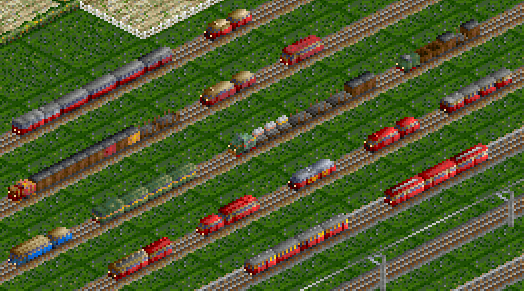 Many of the old railway networks had to close down, their tracks and facilities damaged during the war, and their profits hit by the continuous decline in traffic. Steam traction is long gone and diesel is used pretty much everywhere. Passenger traffic is almost exclusively exercised by railcars: the decline of freight traffic seems to be unstoppable.
Last edited by Snail on 02 Dec 2018 06:00, edited 1 time in total.
The French Narrow Gauge Train Set is now released! Get it here
Top 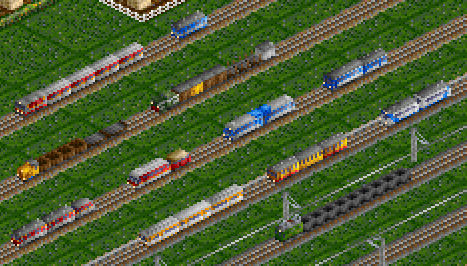 The few surviving narrow gauge networks are mostly relying on their historical rolling stock, in some cases dating back many decades. Some modern rolling stock is being introduced, helping those lines stay profitable; freight traffic is becoming an almost episodic thing. 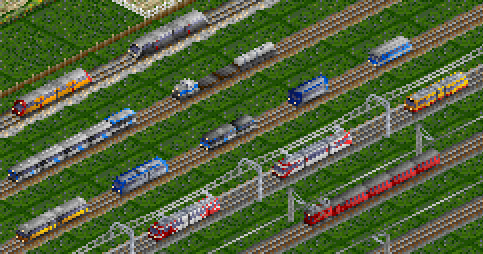 The current situation sees metric gauge lines being operated using a narrow array of modern vehicles. In Corsica and Provence, the introduction of a new double railcar allows for speeds up to 100km/h; along the lines of Mont Blanc, new generations of electric railcars provide cheap and reliable service. Some heritage lines here and there are using vintage rolling stock for touristic trains.
The French Narrow Gauge Train Set is now released! Get it here
Top

-- reserved for future use --
The French Narrow Gauge Train Set is now released! Get it here
Top

You should absolutely put this on Bananas though; you don't need a GPL license for that, just choose "custom" and it can be whatever you want

Very impressive attention to detail, including the in-depth readme! One point of criticisms, though: I understand the set not being available in Toyland (and it's not the only one to do so), but why disable Tropical altogether? It wouldn't be historical, but what if I'd like to build a network in a pre-WW2 French colony, real or fictional? I don't think it's nice to take choice away from the player like that.

Please consider to enable support for the sub-tropical landscape if the parameter is set to "Basic" or "Toy mode". 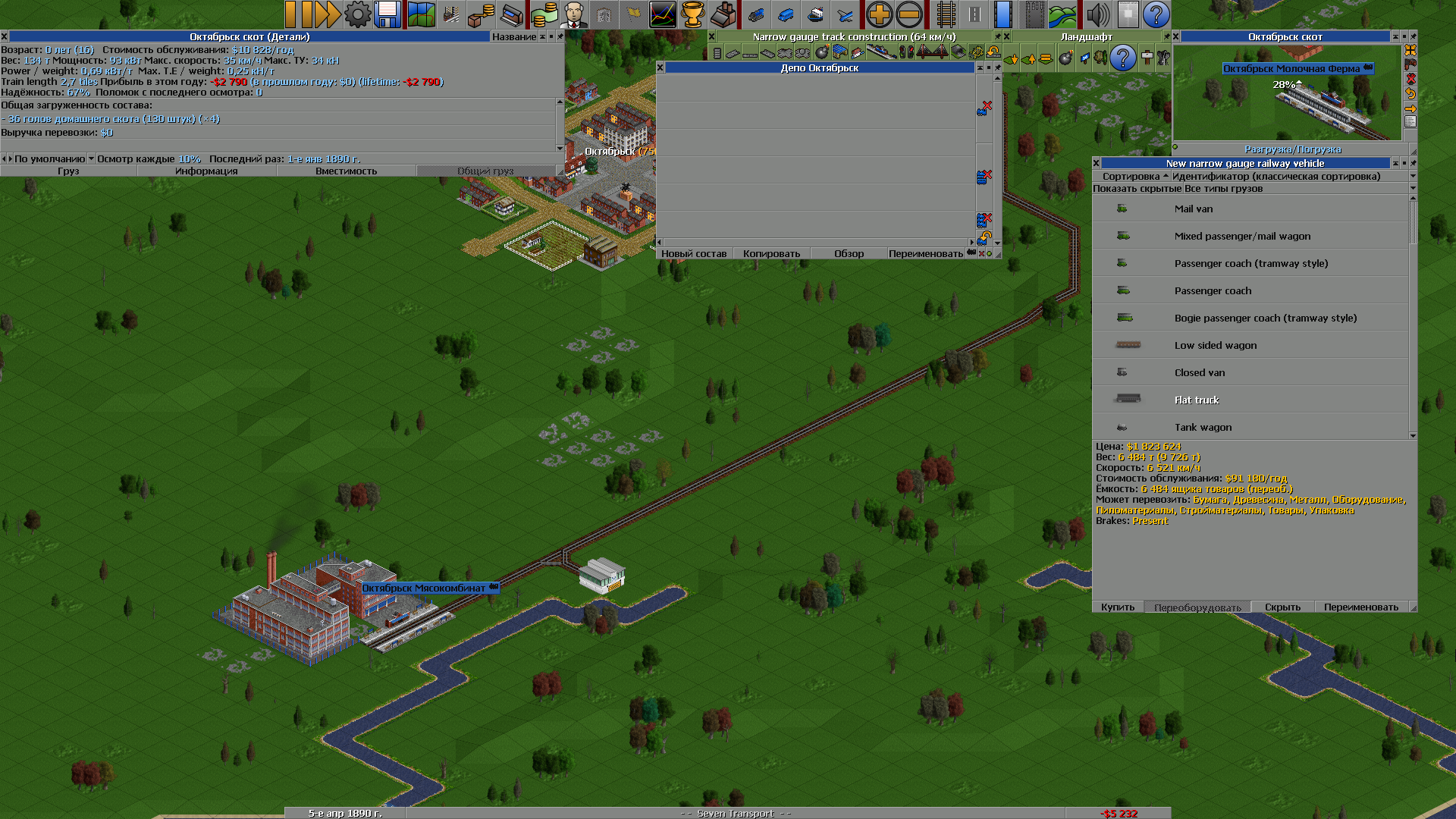 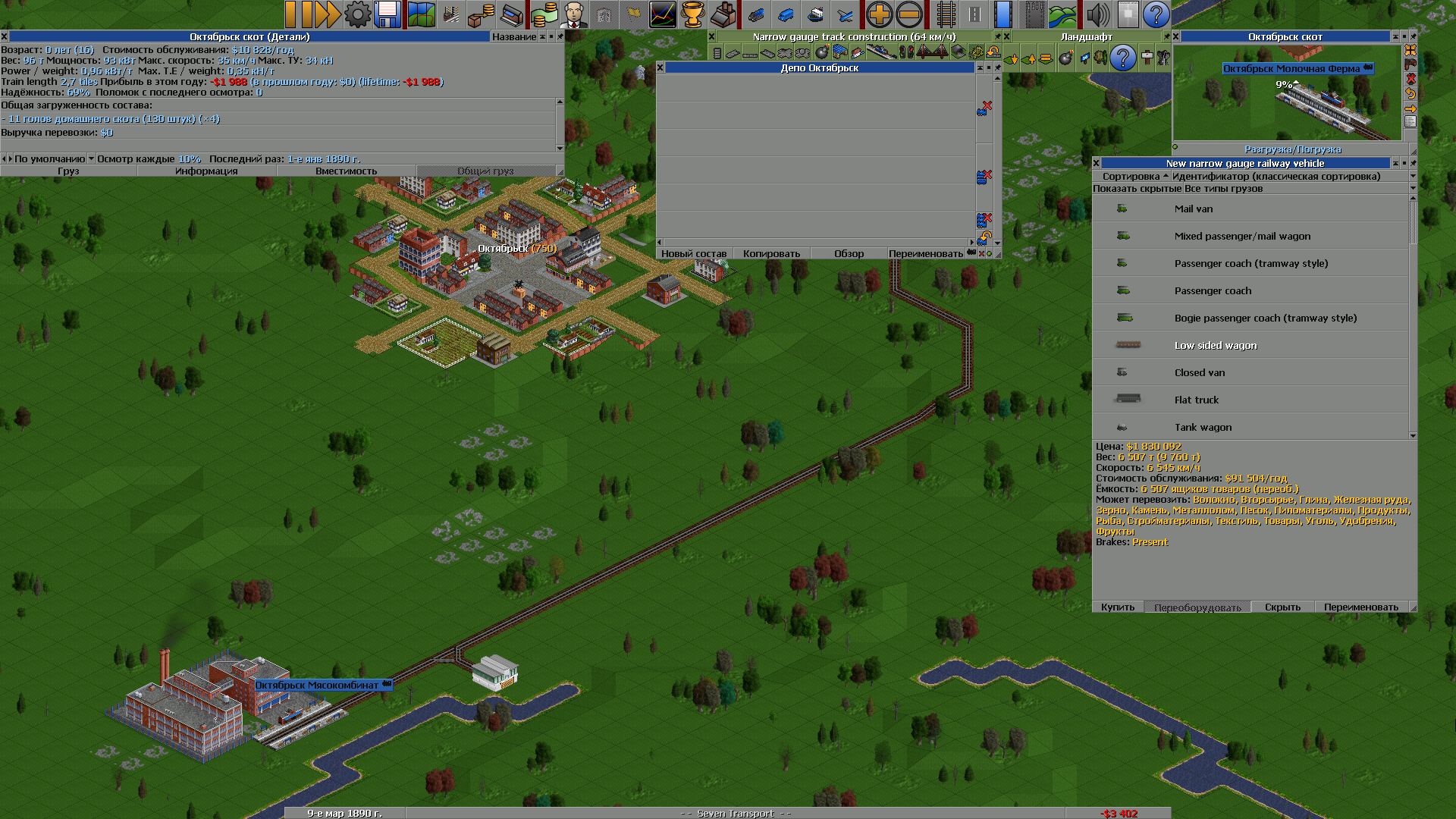 Wow that's awesome! Now I can build my own Vicinal Empire!

Dr B Ching's comment I agree with though - it would be nice to be able to build in a 'hot' French overseas department?
Soccer Mad Boffins
Watch my YouTube Channel
Top

Thanks for your report!

I tried to replicate your issue, but I'm not sure if I can reproduce it:

I'm using JGR's patch (compiled just now), then UKRS2 and NuTracks, before the French Set. No other newGRFs are active. Year is 1890 and the French Set is in Toy mode.
Both wagons appear to have the correct graphics and capacity: 20 crates of goods.

OTOH, in your screenshots I can see weird graphics for the two wagons I mentioned. Have you tried loading this set without the UKRS2 and seeing what happens?

Ah! That's a good question.
Initially, the idea was to draw Algerian rolling stock and use it on Tropic only. However, it would involve *a lot* of work, almost like building a new set altogether. It took me multiple years to get to this point, and with the French Standard Gauge Set still on my list, I doubt this would ever happen.

I'll try to do some tests on my own, and perhaps enable the Basic and Toy modes in Tropic if there's enough demand.
The French Narrow Gauge Train Set is now released! Get it here
Top

@Snail
The bug can be reproduced in the following configuration, without any additional newgrfs.

sevenfm wrote:@Snail
The bug can be reproduced in the following configuration, without any additional newgrfs.

Thanks! I got it now. There seems to be an interference among the different parameters of the set.

Please give me some time to think about a solution. In the meantime, the set will work fine without disabling the "realistic features" (basically, braking wagons).
The French Narrow Gauge Train Set is now released! Get it here
Top

@Snail what do you think about adding horse trains from 1827, so later these lines could be upgraded to narrow gauge trains?
Top

sevenfm wrote:@Snail what do you think about adding horse trains from 1827, so later these lines could be upgraded to narrow gauge trains?

Not sure about that. I think horse-driven trains might be better coded as trams, as part of road vehicle sets. When I did research on those metric gauge secondary lines, I found that none that started with horse traction: they all employed steam (or electric) power since the beginning.

In any case, I consider this set "complete", i.e. I'm not planning to develop this set any further (apart from bug fixes and support for future FIRS cargoes). I've already started work on the SG set.

The first railway line in France, in 1827, was standard-gauge anyways, although if ever someone wanted to see horses, he could use Early Rail Set or create a GRF with plateways and wagonways.
NewGRFs by Tony Pixel :
North American Passenger Railroads
Not Enough Subways

Love this set! But I have found a potential issue (though it may be my own incompetence). The starting (1882) mail van gives a capacity of 25 mail bags in the purchase menu, but only seems to give a capacity of 16 when actually built with the 120T. But maybe this is a design feature?
Soccer Mad Boffins
Watch my YouTube Channel
Top

Kevo00 wrote:Love this set! But I have found a potential issue (though it may be my own incompetence). The starting (1882) mail van gives a capacity of 25 mail bags in the purchase menu, but only seems to give a capacity of 16 when actually built with the 120T. But maybe this is a design feature?

Yes, it's a design feature. The purchase list menu gives the capacity of a generic (usually the most widespread) type of wagon, but when you attach it to a consist, it's going to get the locomotive's livery. As a result, not only the looks, but also capacity, weight and length might change.

In the case of the Réseau Breton, for instance (one of the 120T's possible liveries), the mail wagon becomes this one: 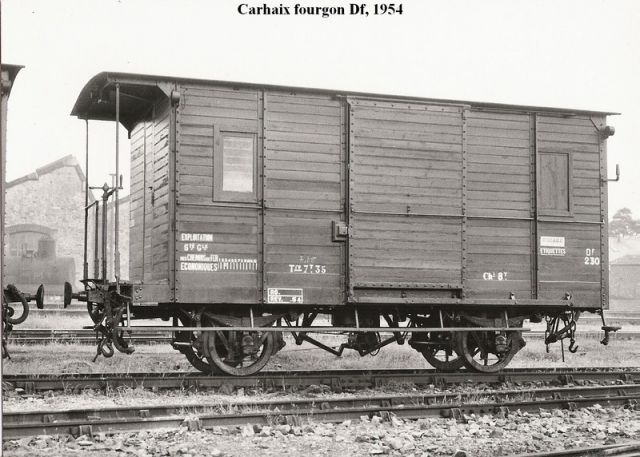 It's shorter and less capable than your average main van (in reality it was only 6 meters long), but it can travel up to 55 km/h to keep up with the locomotive.
The French Narrow Gauge Train Set is now released! Get it here
Top

Ah! I thought this might be what was happening, but I wasn't sure. Clever feature.

I've found that in Reseau Breton livery the bogie coaches can carry 1st/2nd class passengers too. But not in the default. Looking forward to finding more hidden features!
Soccer Mad Boffins
Watch my YouTube Channel
Top