Covering myself with all the glory Andy

It's no trouble to add an earlier one, I'll put it on the to-do list.

And I'm working on extended info pages for every vehicle (currently only available for engines, links on trains page), e.g. https://firs-test-1.s3.eu-west-2.amazon ... gasus.html

Ah yes - I'd seen your "original" versions of these on the Coop pages, but not the ones hosted on AWS. This is a most appreciated development!
Official TT-Dave Fan Club

The Iron Horse docs have a new home, at grf.farm.

Docs list
* all the trains
* the engine tech tree
* some code reference stuff.

I was blind, but now can see ... you're not supposed program GRFs, you're supposed to farm them!
Cattle not pets!

But seriously, thanks for all your great work.
Top

This is just to keep the docs around for historical interest, using the newest Iron Horse is always recommended

How about these new 2 tone liveries?

NewCC 0.3 looks splendid on most 2cc sets (barring UKRS,it looks really weird to me during gameplay,sorry).

Iron Horse is really nice,but I wish that some slower speed diesel and electric locos were added to Iron Pony.

Otherwise ,it looks splendid.
Nothing to put here!
Top

This is a big update to the engine roster. Thanks to Timberwolf for half the inspiration. The other half is because I bought a Heljan Class 58 and wanted to add the same engine to Iron Horse.

"We were in the jungle, there were too many of us, we had access to too much money, too much equipment, and little by little we went insane" - Francis Ford Coppola

I had three rules for Iron Horse UK roster. No Deltics. No Zellepins. No Garratts. 2 out of 3 ain't bad.

If Hymeks had been bigger, or the Falcon / Lion body shape had been used for class 47...

It's not a Deltic, honest! If the DP2 prototype had gone into series production in its original body shape...
The Vulcan was also featured in Iron Horse 1, and it's pleasing to see the wheel turn full circle.

Looks great! Nice to see all the recent work come to fruition!

Inspired by the widely-used-but-not-very-good BR Class 31.

Finally the thing I was waiting for!!!
Nothing to put here!
Top

Happy to hear that

I think this one is nearly done. Few more things I'd like to add. But definitely nearly done

I like this set! I just uploaded a Japan Set 100 year city, and I'm currently working on the US Set! Then I want do one with the Iron Horse Set!

The autocoach has a few quirks

I wanted to include an articulated vehicle with combined passenger and mail capacity, which can be combined with a small engine to make a nice 1-tile train.

Articulated vehicles don't work with auto-replace, so there's only 1 generation provided. This means the autocoach will have a lower speed than some of the available engines after 1930 or so. This is unlikely to change, and probably isn't a big deal on the short routes this vehicle is intended for.

Articulated vehicles can't be flipped, so only one livery option is provided for autocoaches.

Finally, a nice 2-tile train can be made with 2 autocoaches, a small engine, and a medium-length passenger coach or mail van 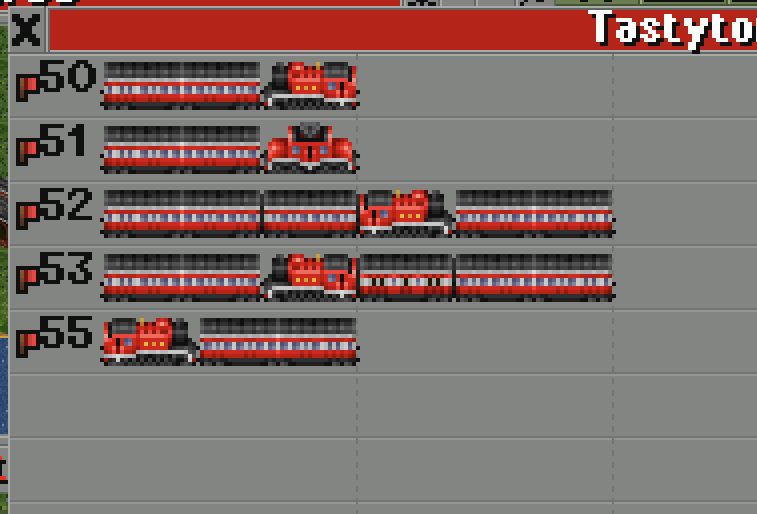 Welp, looks like it's time to start a new game and try out the new trains!

I've been finding uses for the Joker engines on short-distance feeders and cross-town delivery routes, where speed isn't important and two short trains can handle the light traffic with one always loading and the other always moving. The autocoaches will likely be useful in a similar low-capacity, high-frequency role, connecting a single small town to a junction station or city.

Incidentally, I'm glad you explained the autoreplace restrictions. I didn't realize it was possible to autoreplace wagons in addition to locomotives, and have been upgrading trains manually.