This is a personal project I've been working on since New Years Day, in an effort to make an OpenGFX-based American road set to use in my games. Yes, I know about NARoads, but as far as I can tell it's not made for OpenGFX, and there are a few quirks I've seen in screenshots that bug me. These reasons, among others, were enough for me to start a new set from scratch. 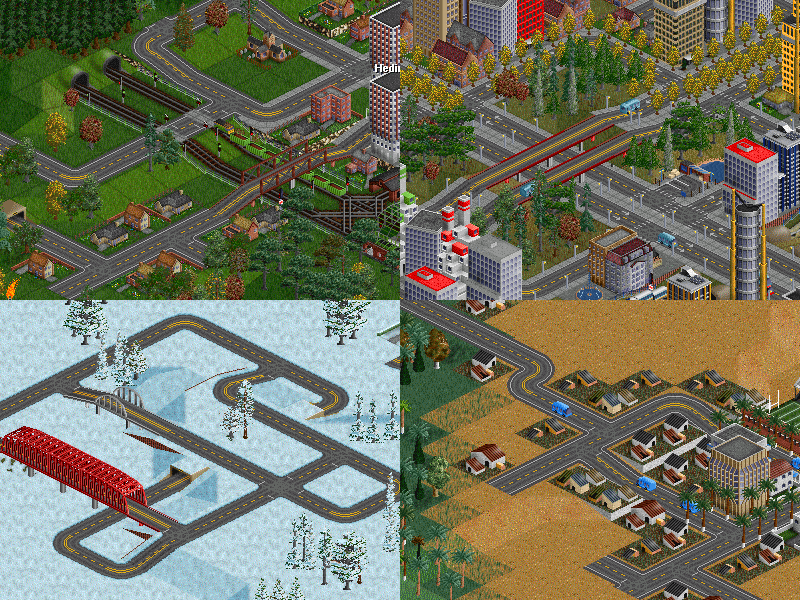 Anyway, as I'm also a fond user of OpenGFX+ Landscape, I've made the set completely compatible with it. If you use the Disable Gridlines feature or even Alpine Climate, American Roads will automatically match the surrounding landscape for a seamless look. There are no extra parameters to bother with, just be sure this GRF is placed BELOW OpenGFX+ Landscape or else it will not work. It will yell at you if you mix that up.

Of course, this GRF also works fine without OpenGFX+ Landscape. All climates are supported, as is left hand drive. I've taken some of the bridge sprites from OpenGFX and modified them to work with these roads, which are drawn a little wider than normal. I've also fixed a few alignment errors that exist in some OpenGFX bridges, so everything lines up correctly now. Plus there are a few other changes I've made for compatibility and whatnot.

This set is OpenGFX only. Use of other NewGRFs will be necessary to play with original TTD graphics or you will encounter glitches. I've tested back to OpenTTD 1.0.0 and everything works at least that far back, but I've not tried TTDPatch, as I don't use it. Maybe someone who does can try it.

I guess that's all there is to it, just plug and play. Hopefully someone else will enjoy it.

American Road Replacement Set can also be found in the online content. Everything is licensed under GPLv2.

======================
New in Version 2 - Dirt Roads! By default ARRS now supplies dirt and sett-paved roads before 1940. If 1940 isn't your preferred switch date, there's a new parameter available so you can adjust the year in which roads change over from dirt to asphalt. Any year within OpenTTD's range is possible; setting to 0 prevents dirt roads from ever appearing (old behavior), setting to 5000001 means roads will remain dirt forever, and anything in-between.

This version is compatible with previous releases - but be aware that upgrading to this new version in a running game before 1940 won't switch to dirt roads automatically, the grf will fallback to the old behavior, so the asphalt roads will remain. The only way to make previous saves switch to the new behavior is to have newgrf developer tools active and change the newgrf settings, which obviously should only be done with great caution

It does look nice - I'll have to fire up a game and give it a go.

While I do not post much, I do read these boards frequently.
Top

That looks quite awesome and integrates really well into the landscape

Somehow I expected all kind of incompatibilities without OpenGFX, but I don't see any big problems with the classic baseset 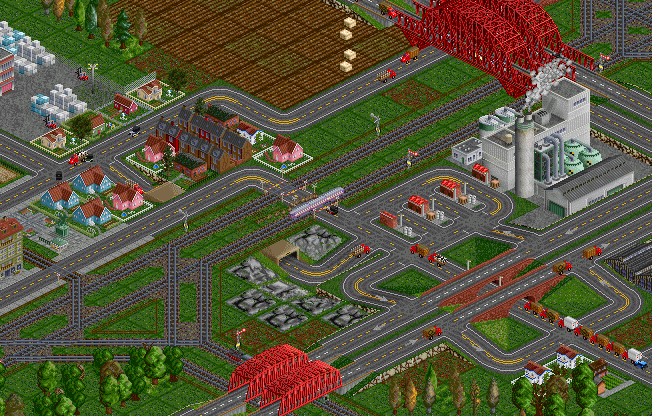 NARoads is my favourite grf, but this is also very nice grf and I think this will be in my future games.

Oh I really like this. It blends in smoothly with its surroundings. That's a given use in my next game.

I just tested in TTDPatch (TTDP). This file crashes TTDP. Without decoding the file into NFO code (no time at the moment) I can't trouble shoot this at this time. When I complete a couple of projects I'll return to look into this file, unless someone gets there before me.

Unfortunately, there is no way to make the graphics change depending on what road piece is next, so making the double yellow work as you've suggested is not possible. In regard to signs and signals, that is an idea I certainly toyed with, but since they will be drawn over by vehicles it would look sort of ugly. At best that would be something for a parameter, of even an add-on set.


Pyoro wrote:Somehow I expected all kind of incompatibilities without OpenGFX, but I don't see any big problems with the classic baseset

Using TTRS-Style bridges and different tracktypes helps a lot, if you use the standard graphics the problems are much more clear.

Hm, indeed, it does.

Andrew350, you're using the "replace" command for some sprites which should be replaced by the "replacenew" command (as their sprite numbers are not guaranteed, see http://newgrf-specs.tt-wiki.net/wiki/NM ... ew_sprites ).

Namely it concerns the sprites for the one-way roads. This change should fix it:

Okay, I've fixed that line and replaced the file above. Hopefully that was the only problem, if it works now I'll amend the readme and send it off to the fruit store.

Given the bit of code before I reckon it's written in NML. If it is a relatively new NML it could be any issue of:
Top

Andrew350 wrote:Well...I'm using NML 0.2.4, if that helps. I'm pretty sure that's still GRF version 7, but that's the extent of my technical knowledge there.

Yes, that NML version should still produce NewGRFs with grf v7. Having looked at the code, I don't exactly see where the non-operability with TTDPatch r2334 or newer might come from - could be missing a case where replacenew would need using (but I don't see it) or could be something else, also in NML or even TTDPatch itself.

What about changing the one-way overlay marker to give a yellow stripe at left shoulder and dashed white stripe in the center?

is it not possible to draw the tunnel background sprite to have a double yellow stripe? Do the bridge overlays come from the plain / and \ sprites, or are they separate?

While that is true on long uphill climbs, I drew the passing stripe under the assumption that it was not a very long grade, in which case passing is usually restricted going uphill due to visibility reasons, i.e. you can't see vehicles coming over the top of the hill. I understand how you can see it differently, though, especially if you're building a long uphill section. On major highways that have long uphill grades there even tends to be an extra lane added for overtaking, maybe that would be an idea for an overlapping NewObject akin to the ones from the Dutch Road Furniture set?


supermop wrote:What about changing the one-way overlay marker to give a yellow stripe at left shoulder and dashed white stripe in the center?

This was actually something I wanted to do originally, but it wouldn't work very well in the case of slopes and the fact that one way roads can't have intersections, which would lead to weird line mismatches. As it is one way roads look a bit odd with the stopping lines not being correct at intersections.

supermop wrote:is it not possible to draw the tunnel background sprite to have a double yellow stripe? Do the bridge overlays come from the plain / and \ sprites, or are they separate?

All of these sprites are indeed drawn seperately, so it is possible to draw a double yellow here. I realize passing on bridges and in tunnels is usually disallowed, plus I've already been asked about it, so maybe it is just better to go for realism in this case

Thanks so much for sharing! I think they look amazing!
Alberta Town Names - 1500+ real names from 'Acme' to 'Zama City'
MinchinWeb's Random Town Name Generator - providing 2 million plus names...
WmDOT v13 - An AI that doubles as your highway department
Top

TBRS doesn't detect road sets, the set would have to be re-compiled with a specific road set's graphics drawn onto each bridge sprite.
Do you like drones, quadcopters & flying toys? Check out Drone Strike Force!