Fed up with a single bus service turning every town into a metropolis? Tired of your maps being full of industries after a century of gameplay? Me too. That's why I created Villages Is Villages - a game script to stop those pesky towns from growing too big for their boots.

Town growth rules are changed as follows:
In addition, you can configure the minimum amounts of mail and passengers to be transported from the town before it can grow so towns and cities will only grow if they have a sufficiently comprehensive passenger/mail network.

There is also an experimental feature to manage industries, which will prevent new industries from opening unless a (configurable) proportion of those already on the map have service. As this currently relies on manipulating a game setting this is marked as experimental, although it has worked in all my testing so far.

The script behaves fairly well on large and densely-populated maps; it handles 20,000 industries on the map with no problem, but more than about 2000 towns mean it can take over a month of game time for all of the towns to be updated on first load. (The script employs some caching and smarter decisions on when to update towns on subsequent runs).

This is the first time I've written a game script - or anything in Squirrel for that matter - so no promises that the code is good, idiomatic Squirrel or that there won't be unexpected bugs. I haven't encountered any problems in testing (even for situations which crash several AIs) but of course that just means I haven't encountered them, not that they don't exist

The script is on BaNaNaS, or you can download version 1 from the attachment. Tested with OpenTTD 1.6.0.

You will need SuperLib for NoGo version 39 (note there are two versions of SuperLib, one for AIs and one for game scripts) installed - this is listed as a dependency in BaNaNaS, but outside of that you'll need to install it manually.

Looks interesting, I'm going to try this in my next game.

I'm getting this. No idea why. I've downloaded SuperLib-39.tar and it's curently in 3 different folders, just in case it might not be in the 'right' one...

I do generally know what I'm doing...(downloaded ViV.tar from this thread). 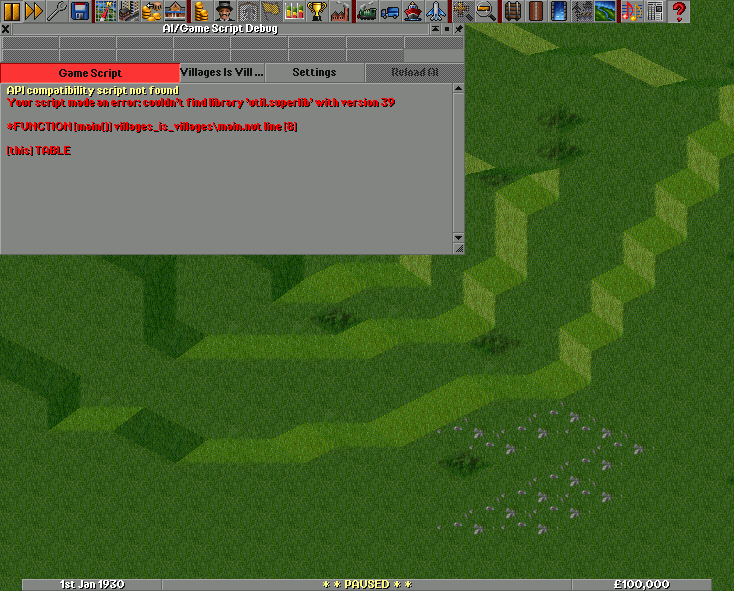 
Ah, it wants Superlib for NoGo, so I got that and now I get the following. I'm using SPI v1.2 (as yet unreleased) but it shouldn't be causing problems. I'll try a clear newgrf environment in a few minutes.
(I've extracted the files into a folder called ViV so I can see what it's trying to do.) 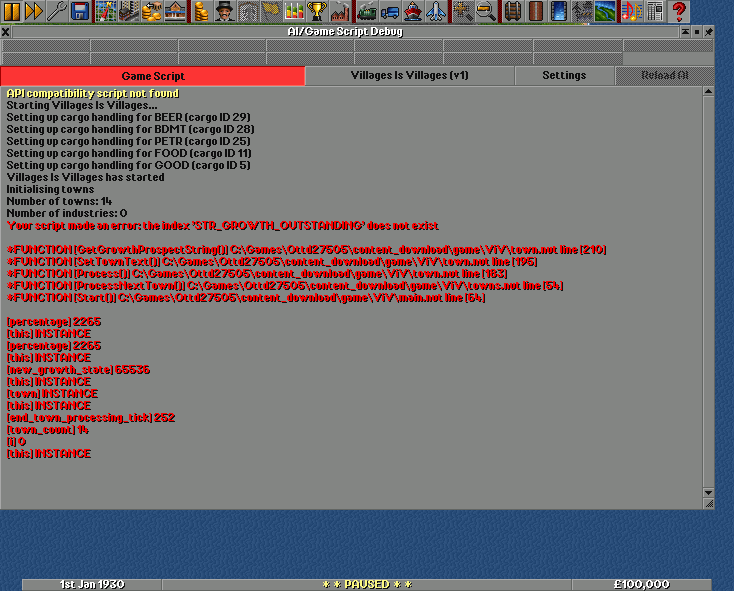 Yeah, blows up even with a newgrf-free game.
Top

That's interesting - looks like it's running into some problems with the language file. It's also not finding the compatibility script for API version 1.5 (AFAIK there haven't been any material changes 1.5 -> 1.6), I don't know if that would have an impact. I'll give that a try my end.

Which version of OpenTTD are you running?
Any chance I could get a screenshot of the folder you extracted the .tar file to?

The SuperLib for NoGo is a problem I ran into as well - there's a different version between AI and NoGo, I was convinced I'd downloaded version 39 until I realised I was looking at the AI version It's fine if you download from BaNaNaS, but of course I forgot about using the .tar directly. I'll make a note on the first post so nobody else gets caught out.
Last edited by Timberwolf on 04 Apr 2016 22:26, edited 1 time in total.
Top

Not having the compatibility script doesn't cause an issue for me in nightly r27510; I'd assume the same is true for OpenTTD 1.6

I tried different languages to see if that had any impact, but it's happy there for me.

In the folder you unpacked, do you have a lang/english.txt? It feels to me like the language file is missing - at least, the only way I could reproduce that message was by unpacking the .tar file and then removing the 'lang' folder.
Top

I tried the .tar file and the unpacked files via a folder.

The unpacked files have an english.txt file, contents are: 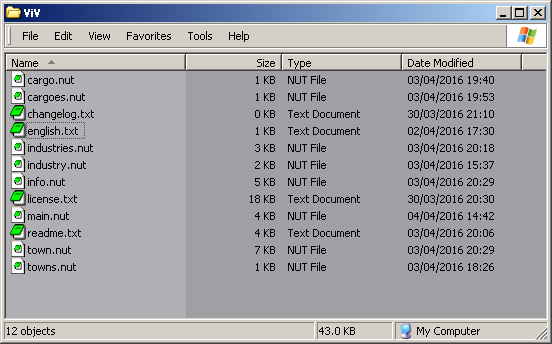 I'll try a few things in the meantime if I get an opportunity.

Solved? I just saw that you used V1.6.0. I'm currently using an earlier nightly (r27505). I'll try a current nightly and report back. I bet that might be the issue.

My fault for the file extraction. I didn't put the english text into a lang folder...How did I miss that?
Top

Can you tell me why my city dont grow?

This is a feature I have been waiting for since a long time now, I very much disliked the standard behavior of towns!
I haven't been able to play a lot since quiet some time now, but as soon as I have some spare time I will try this.
Top

d0mi3l wrote:Can you tell me why my city dont grow?

The "Growth Prospects: None" line indicates that this city has hit its population limit, beyond which it won't grow unless you:

(In addition to the global limit, each town has its own individual population limit - the parameters just set the minimum and maximum range for this value. The "growth prospects" line tells you how close the town is to this limit without revealing it to the player outright.)
Top

Could you adds some info about deliver goods, fuel, etc. or found new buildings to growth town in town window.
Top

Yes, that's a good suggestion - it would make that mechanic more obvious if there's a context-sensitive message telling players what to do next in order to make the town grow.
Top

I found a little bit of time this evening to hack on this, so town windows now display appropriate advice: 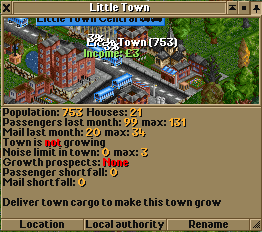 And, if I add a few cargo trucks bringing goods to the town, the next option: 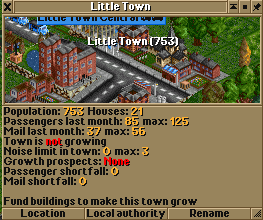 Advice will always show the critical blocking issues of passengers and mail first, so hopefully will make the "what do I need to make this town grow?" question a little bit less opaque.

Update is on BaNaNaS, but for those who'd prefer a direct download I'll also attach it here.

btw, for any GS experts - I used "town cargo" as a generic, but is there a nice way to look up and display the translated actual cargo names given a cargo label (e.g. GOOD or PETR), so I can tell players exactly what they need to deliver without having to assume they're using a specific cargo set?

Timberwolf wrote:I found a little bit of time this evening to hack on this, so town windows now display appropriate advice:

And, if I add a few cargo trucks bringing goods to the town, the next option:

Advice will always show the critical blocking issues of passengers and mail first, so hopefully will make the "what do I need to make this town grow?" question a little bit less opaque.

Timberwolf wrote:btw, for any GS experts - I used "town cargo" as a generic, but is there a nice way to look up and display the translated actual cargo names given a cargo label (e.g. GOOD or PETR), so I can tell players exactly what they need to deliver without having to assume they're using a specific cargo set?

If you only want to display the cargo human name without any amount, then use the {CARGO_LIST} string parameter. I don't remember exactly the details on what parameters it accept (eg. what bitshifts you can do to), but I looked up the most simple usage case from NoCarGoal for you.

this._cargo_list[] is an array with the 3 goal cargoes.


If you want to include numbers, then you can just use {CARGO_TINY} or {CARGO_LONG} and pass first the cargo and second the count.

Oh.. and two hints. First, if you add strings, add them to the end of english.txt if you aim for save game compatibility. Eg allowing upgrade a old game to new version of GS. If you don't, then you can insert new strings anywhere in english.txt as you see fit. Second, a useful trick is that you can add a integer number to a string reference to get the next string in english.txt.
My OpenTTD contributions (AIs, Game Scripts, patches, OpenTTD Auto Updater, and some sprites)
Junctioneer (a traffic intersection simulator)
Top

Excellent, thank you very much. I've made a small update so you now get shown the cargo which will have the biggest impact on town growth. New version on BaNaNaS and attached here.

And another small update... thanks to forum member SilverSurferZzZ, we now speak Spanish! 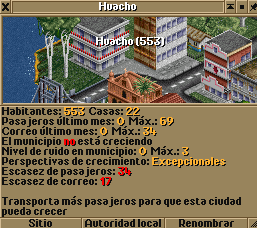 Update attached and on BaNaNaS

I'm getting this in the debug console while I am using Villages Is Villages to test something for my patch.
Formerly known as Samu
Top 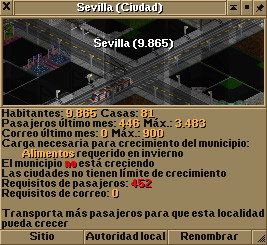 Any patch that you apply to the game can create all kinds of problems ... I don't know what it could be.

STR_CONCAT_2, STR_CONCAT_3 and STR_CONCAT_4 are a special strings... String inside string, and other and other inside... ... ...
Maybe your patch don't support them