Goal: Transport X units of cargo A, B and C before year YYYY.


Edit: note that a nightly is needed.

Started play testing this, thanks Zuu

From the test, this one is kind of perfect as it stands. I'd rather see keep it simple and think up new alternative GS

More test games, it was fun

Quite a nice game script.

We played jointly with 5 people in one company. We were asked on an arctic map with medium water and not too many hills to deliver overall 25k gold, oil and wood, starting in 1950 (default trains, heqs, fish, default industries). (bronze: one cargo met, silver: two cargos met, gold: all cargos met)

Now, that was a nice challenge. Kept us busy, at an edge. Not much time for slacking off and watching trains. Or beautifying crossings or stations

Suggestions for improvements:
- Create News event when a single goal is reached
- like Alberth, twice a year might be nice (configurable, not needed for long-term goals)

Suggestions for changes / different goals:
- Sequence of cargos to reach the goal
- deliver Xt to each recipient on the map.
- attribute points for early goal fulfillment; Maybe (goaldate-goal)^3 or so - allows to continue past set year, but you'll get negative points, if not fulfilled in time

Sum up points for different cargos for total score.
- require certain transport mode or several or different (needs care; not each cargo and mode makes sense)

Yexo wrote:Hmm, not possible with the current API, but perhaps update the goal text with the progress? Like "25k ton of cargo to transport, (2043t coal done, 0t wood done, 49203t oil done)"?

It is actually possible. Remove the goal and add a new to update it. The reason for not doing it is however that showing the same progress text for all goals would look a bit strange. Also the length of the goal strings are already very long.
My OpenTTD contributions (AIs, Game Scripts, patches, OpenTTD Auto Updater, and some sprites)
Junctioneer (a traffic intersection simulator)
Top

Perhaps the goal window needs to be extended towards a title + collapsible explanation, where the latter gets automagically wrapped at window border?
Top

While doing a quick tryout of this (looks fascinating!), I had a small train deliver 3 cars-worth of steel (20 tons per wagon) and was credited with delivering 120 tons.

Thought you might like to know. See middle line in history. (edit) Best to show the right train. 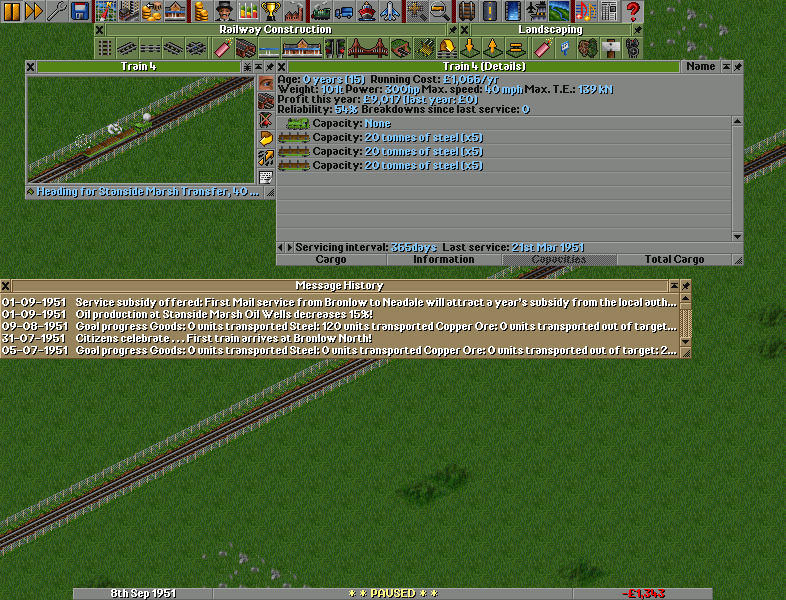 
Ha! Just delivered 150 tons of copper and got credited with 300 tons!
Top

Wonder if this is the cause. The goalscript has the goals set twice. Is this right? 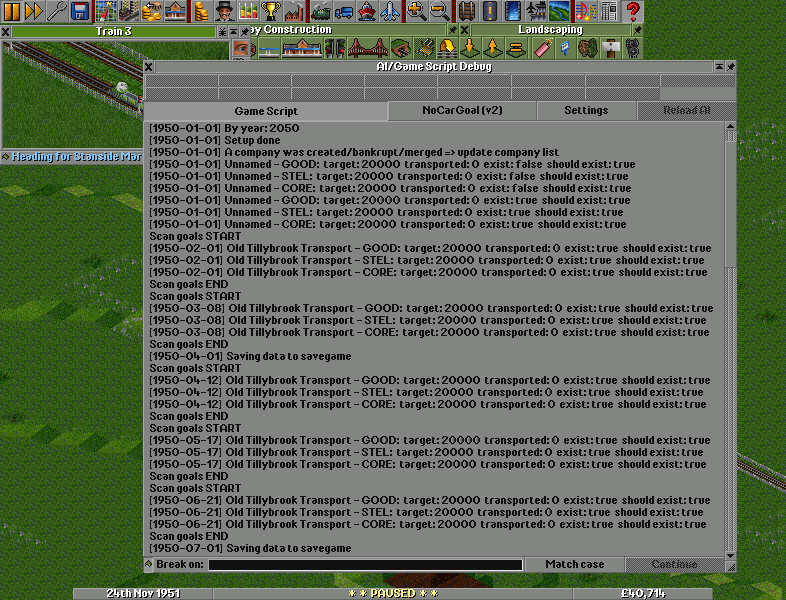 In the top right corner of most news items, the date is included as standard behaviour. So I don't think it is necessary to include that in the news text.

If I figure out how to use the {CARGO} thingy instead of "{NUM} units", I will need to display the goal target for each cargo type and in that case I will re-work the news to include the target in some way.
My OpenTTD contributions (AIs, Game Scripts, patches, OpenTTD Auto Updater, and some sprites)
Junctioneer (a traffic intersection simulator)
Top

The target is there as you can see below

The other issue that I tried to hint at is that it is not so user friendly to print cargo amounts in the internal units as the script does at the moment. Because for some cargoes one internal unit doesn't equal one tonne/litre etc.
My OpenTTD contributions (AIs, Game Scripts, patches, OpenTTD Auto Updater, and some sprites)
Junctioneer (a traffic intersection simulator)
Top

What about the remaining time or the date / year the goal must have been reached?

While doing a quick tryout of this (looks fascinating!), I had a small train deliver 3 cars-worth of steel (20 tons per wagon) and was credited with delivering 120 tons.

Thanks for the report!

The reason of this behaviour is that I just monitor all towns and industries for cargo delivery. It appears that both the power plant and the town where the powerplant is located registers the cargo delivery.

I guess the easiest solution is to just monitor towns for cargo delivery as I guess if they register coal delivery, they will register any cargo.

Edit: As you may guess, a consequence is that currently goals for cargoes that deliver to industries are easier to accomplish than passengers which I suppose do not show this behaviour.
My OpenTTD contributions (AIs, Game Scripts, patches, OpenTTD Auto Updater, and some sprites)
Junctioneer (a traffic intersection simulator)
Top
Post Reply
67 posts