Available from OTTD's content browser in-game under the following names:

(Both names are a little wrong and I can't change them, but it doesn't really matter.

A scenario I made for myself, but shared here. Now more modifiable since v1.1: You can edit the NewGRF selection (at your own risk!) in the Scenario Editor by typing "set scenario_developer 1" in the developer console and loading my scenario into it. You should keep the town and bridge related NewGRFs, and demolish the two existing default industries off the map (1 coal mine, 1 power plant located between Southend-on-Sea and Maidstone) before adding a different industry NewGRF, but everything else should be "safe" to change.

A different take on something that's been done before a few times by others. The scenario is set in the UK & Ireland and is designed to be fun to play and give a paced endurance challenge without being too complex.

Play over 250 years between 1850 and 2100 - Since you have a long time to play, there's a slow start, and you have to work to build your transport empire. The UKRS2 newgrf provides trains until 2020, when default Maglevs and later Vactube trains will appear (but Monorail won't) until 2080-ish (if you get that far).

Design a network to link and grow the towns - Passenger routes may not make much money with the high running costs of trains, so you should subsidise your passenger routes with industry routes. Only a single (default) coal mine and power plant exist on the map to get you started - But many more will spawn randomly soon after you start playing.

The map is large with only a small landmass - I've set the industry density to "very low". Although the game will cram very many onto the land anyway, new industry construction reaches it's peak at around 20 years in.

I found that existing heightmaps of the UK were too hilly for my liking, so I made my own in Photoshop by tracing various maps, then painted on mountains over an elevation map using a brush type, giving them a rough look (unlike the smoother hills of Genesis world gen), while still being flat enough to easily build over, since they're not higher than 4 tiles above sea level.

Towns were chosen based on location, distance from other towns, real-world population, and historical importance - Which is why some large towns in the south of England don't exist in this scenario, but yet smaller towns in Scotland and Ireland do. All but the major cities have low populations for the player to grow. England has many more towns than Ireland and northern Scotland to reflect real-world population distribution.

They were placed by eye with maps as reference (some may be in the wrong place - The heightmap came out skewed in a weird angle) starting with those closer to the coasts, then working my way inland using the coastal towns as reference points. City towns in real world got the "city" status in-game, even if they became cities long after 1850.

It took a long time to build this scenario and I often left it to run while going AFK - Trees have run rampant across the map even though I clicked "Random Trees" only once before building any towns (big mistake!). You can make them transparent, but towns may hate you for a while when you build near them. Start with stations first before building anything else.

The "Progressive Rail Set" Newgrf is included so that Maglev trains can run on VacTube rails during the very late game (if you get that far), since VacTube trains cannot carry cargo aside from goods. This is why I've set vehicles to not expire (MagLevs do at around 2060 for some reason!), but old vehicles can be hidden in the depot menus.

I've done a little route planning based on efficiency rather than real-world routes.

This is what London looks like after 47 years. Monopoly board! I haven't finished hooking up the major city routes yet 'cause trains which go faster than 70 MPH have only just come out. The "metro" link between the two termini was an afterthought. 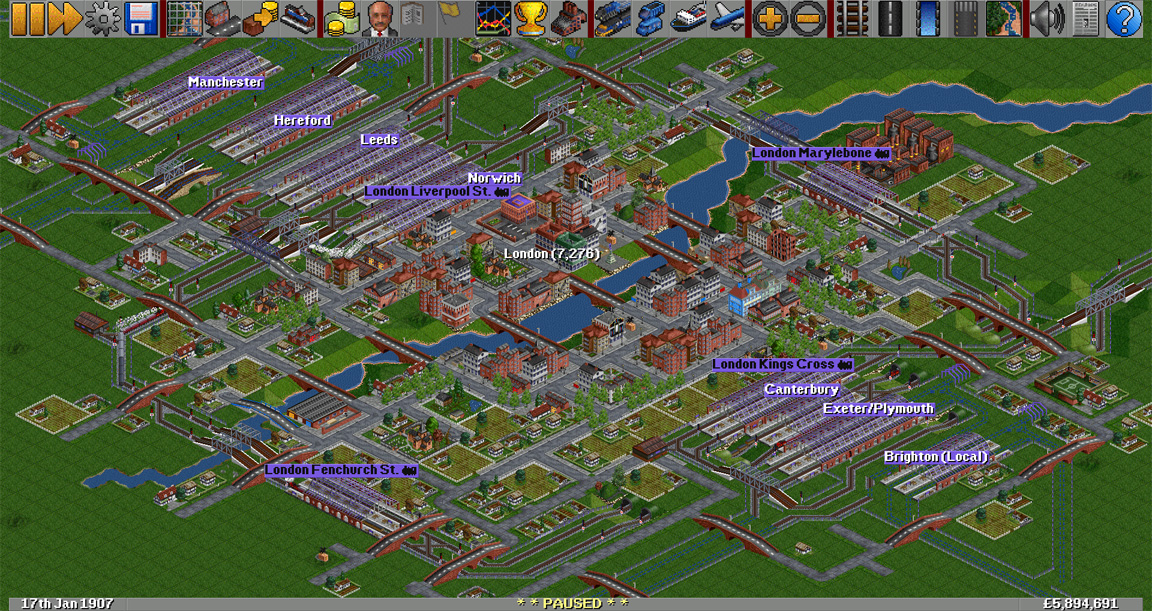 Although I've found out that it was difficult to make a profit from passenger services alone in the early years, until the industries rearranged themselves and I could set up some basic coal > power station routes to subsidise my fledgling empire. Maybe I made the towns too small as well - Train running costs in the 1900s are so high that it's hard to keep passenger routes profitable if they only service small towns, even with cargodist enabled. Many make a loss. But the towns won't grow without the train services, so I keep 'em running anyway. Long-term investment and all that.

It's still a fun challenge.

The above may put people off - Even though I made it for myself, I'd still like people to play it. I'm thinking about releasing a vanilla version of it without the newgrfs with all the towns in place, but I'm wondering if there's a way for people to add newgrfs to existing scenarios?

OTTD_Routeplanning2.jpg
(178.14 KiB) Not downloaded yet

Darkhoodness wrote:
I'm wondering if there's a way for people to add newgrfs to existing scenarios?

Yep, if the use newgrf developer tools on but it's not guaranteed to not break games

* The former was the reason for the 1860 start ('cause of Oil Well spawning) and is now redundant - The scenario starts a decade earlier at 1850 instead. But I can't change the name.

* The map now only starts with a single default coal mine and a single power plant which players can use to subidise their transport empire before linking the towns. New industries spawn randomly soon after a game is started, and reach a peak total after 20-ish years. Oil related industries apparently don't tend to spawn until later, where you'll get oil rigs very far out to sea at the edge of the map. But you have massive ships (FISH NewGRF) to transport the oil from them.

* The lack of initial industries means that it's now easier to edit the NewGRF selection (at your own risk!) in the Scenario Editor by typing "set scenario_developer 1" in the developer console and loading my scenario into it. You should keep the town and bridge related NewGRFs, and demolish the two existing default industries off the map before adding a different industry NewGRF, but everything else should be "safe" to change. See https://wiki.openttd.org/NewGRF_FAQ for more info. You can try adding FIRS or ECRS to the map if you like.

Perhaps you can swap out UKRS2 with the BRTrains NewGRF, too.

* London's initial layout has been revamped and should now be an easier town to start in.

The landmass is small vs the map size, so even with industry density set to "Very Low", OpenTTD will still cram many industries into a small space. TaI would only spawn secondary industries close to towns - The result being that towns would keep getting "walled" off by a circle of industries. I like to build big stations and don't want to use the "magic bulldozer" cheat, so this wasn't ideal.

I like TaI Basic's improvements over the default industries - Limited stockpiles and a limit to primary industries added an interesting challenge, but unfortunately the above thing was a problem. Shame it's too old to have options which may change this behaviour.


brtom wrote:
Yep, if the use newgrf developer tools on but it's not guaranteed to not break games

Thanks - I saved a version of my scenario which had no industries, so was able to revert back to and modify this when I had trouble with TaI Basic Industries.
Top

Is it possible to add bob's buses in, seem to only have 2 cars as an option for passengers
Top

I like this scenario a lot… except for the high running/infrastructure costs, which eventually make operating any sort of rail network unfeasible after 100-odd years.

As an experiment, at the end of my last game (by subsidising passenger/mail services with freight I made it as far as the 1980s) I cheated to gain extra cash and then replaced a couple of trains with 140mph Class 91s. Even hauling 12 carriages each between cities with populations of over 10,000 (London's was over 30,000), they made a loss. Yes, I understand that I could probably make some money by building airports, but frankly, if you can't turn a profit with trains in what's predominantly a train-network-building simulator, there's something wrong!

Please address this in future updates - in all other respects this is a great scenario!
Top

In the current england you have a number of companies. I thought, I also do this in this scenario. In the scenario I have made, there are seven companies in England and Scotland. There are four companies that are in London and some companies also have boats. Are you the company that survived?

The necessary files are the same as the original file!

In you’re uk map could you add a food factory
And stuff to go with it, also water factory’s and water towers for towns
I know it’s in deserts but could also have it in you’re uk map as well?